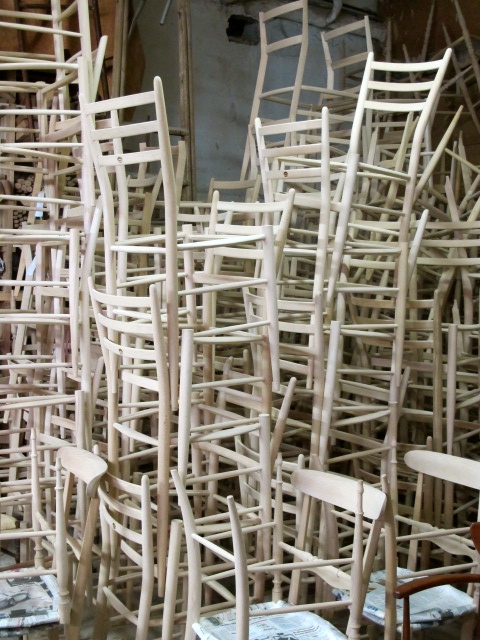 Giuseppe Gaetano Descalzi was a visionary when it came to chairs. Chiavari, Italy had been known for the production of heavy, elaborately carved furniture since the year 1200.

In 1807, this young craftsman, Giuseppe, came up with a chair that was “so lightweight that even a child could lift it with a single finger.”

There’s only one factory in Chiavari that still makes these chairs by hand, and a few years ago, I paid a visit.

Ettore and Italo Levaggi are two of the four brothers who founded the Fratelli Levaggi chair factory fifty years ago, replicating the craftsmanship of the famous Chiavarina chair in the place where it was first made.

The two older brothers, Rinaldo and Alessio, have retired, but Rinaldo still comes around, as he did on the day I was there. He told me about how they still make the chairs in the way they were made in the 1800’s.

Before I continue on about the factory, a word about the famous chair. If you’ve never heard of a Chiavari chair, you’ve probably seen one…it’s the classic banquet chair used at every special event, including White House dinners, and John and Jacqueline Kennedy’s wedding.

Giuseppe would be amazed at how far his Chiavarina has come.

The original Chiavarina chair was hand-carved of cherry wood, with elegant arches, spindles, and tapered dowels that give the chair its distinctive look.

At Levaggi, the delicate spindles are still hand-carved, so that no two are exactly alike.

The Levaggi brothers continue to make the intricate style of the original, but have also simplified the design, and created new styles, to better suit contemporary tastes.

When I stepped into the Levaggi factory, the first thing I saw, leaning against a wall, were tall, rough-edged planks of wood that will be cut into parts of the chair.

Across the lofty room hung hundreds of varieties of patterns and shapes.

Once the shapes are cut out, Italo sands them on a large belt sander.

In the room at the back where the chairs are assembled, there are shelves upon shelves of dowels and spindles, and stacks of partially assembled chairs.

The pieces are glued together with a concoction made from an ancient recipe of animal bones. The glue is kept hot on a burner for use in assembly, and dries to a hard finish. It’s one of few adhesives that can be “reversed.” It will become pliable again when re-heated, so chairs can be taken apart for repair.

The seat is made of thin strips of reed tightly woven together. A local woman weaves them in her home and delivers them to the factory.

One of the most surprising things about this light-as-a-feather chair is how strong it is. It is assembled without nails, and uses angled joints for maximum support. At the time it was first made, local craftsmen in Chiavari would boast, “they weigh less than two pounds but can hold up to a ton.”

I’m not so sure about a ton, but here’s Rinaldo and Ettore Levaggi proving that their Chiavari chair can hold more than 450 pounds.

Ettore’s son, Paolo, will continue to run the factory, carrying on the family tradition. His brother should be joining him…when they can find him. (At the time I was there, he was missing in action. They were laughing about it, so I don’t think they were worried.)

Leaving Fratelli Levaggi, I smiled as I passed Rinaldo’s hat sitting on the stacks of chair backs.

I wasn’t sure why, but I loved being inside the chair factory – the scent of timber, the flecks of sawdust floating in the morning light, the wobbly stacks of chair frames, and the years of history surrounding me.

My own great-grandfather, Oscar Kaeppler, had worked in a chair factory.

There’s chairs in my family, too.

Tags: chairs, Chiavari, design, furniture, I T A L Y
admin
https://justonesuitcase.com
There are 10 comments for this article