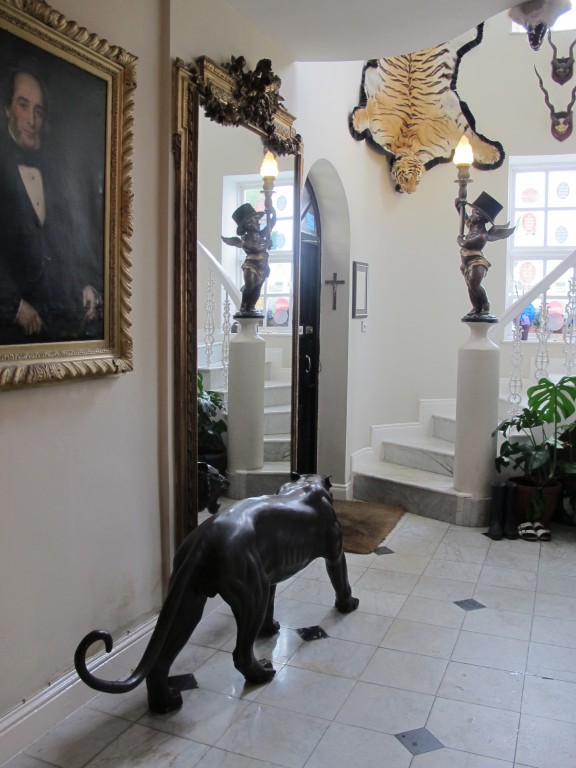 A fortuitous change of plans led my sister and I to a memorable stay at The Quay House, the remarkable, welcoming country home of Julia and Paddy Foyle.

The Quay House sits at the edge of the windswept moors of Connemara, below the cliffs towering over the Atlantic, overlooking the harbor, just down the road from the delightful village of Clifden.

The oldest building in Clifden, The Quay House was originally built in 1820 for the local Harbor Master.

It later became a Franciscan monastery, then a convent, and was converted to a hotel at the turn of the century.  Lovingly restored in 1993 by the Foyles, it is now a guesthouse with fourteen guest rooms.

It is a family home full of character…portraits hang on the walls amidst animal skins and artifacts, and everywhere you look there is a unique detail or intriguing memento.

Around every corner there’s a cosy place to hang out amongst the family’s amassed collection of fascinating objects…and a pug named Blossom.

I love decoration that doesn’t take itself too seriously, and this house is full of surprises.

The guest rooms each have their own individual personality.  We stayed in a tranquil, pale blue two-room suite.

It was a full house when we were there, but thanks to the Foyles and KeeWi Photography, I can show you pictures of some of the other rooms.

Breakfast is served in a light-filled conservatory under a canopy of Virginia creeper ivy.

Silver domes, formerly used to cover platters, are cleverly hung on a wall as art.

Fruit and cakes sit atop a marble pedestal.

The menu includes porridge with berry compote, and scrambled eggs with smoked salmon…but, in my opinion, there’s nothing better than a traditional Irish breakfast of perfectly cooked eggs, rashers of bacon, pork sausage, and grilled tomatoes and mushrooms.  (Truth be told, the full Irish breakfast usually includes blood pudding, but I passed on that.)

The tables are laid with damask linens, and fresh-squeezed orange juice is poured into crystal goblets. There’s good strong Irish breakfast tea, of course, served in a silver pot.  Slices of toast, with the crusts removed, stand in a silver toast rack.  Oh, so civilized.

Paddy and Julia are gracious and generous hosts that you immediately feel like you’ve known all your life.  Funny and energetic, they are great fun to chat with, not to mention a wealth of information about the area.  (In an interesting coincidence, it turns out that Julia had recently been to visit the Italian village where some of her ancestors hailed from, and it’s in the same area of Liguria where I have been working on the villa restoration for HGTV.)

Not surprisingly, The Quay House has won several awards over the years, including John and Sally McKennas’ Guides “100 Best Places to Stay in Ireland” for three years running. (Formerly known as The Bridgestone Guide.)

Awards, breakfast, and fabulous location aside, The Quay House is a designer’s dream.  Back in the States now, in my home of muted colors and understated furnishings, I remain in awe of the sheer exuberance and lightheartedness of those extraordinary interiors.

Thanks to KeeWi Photography for additional photos where noted

Tags: Clifden, County Galway, hotels, I R E L A N D
admin
https://justonesuitcase.com
There are 2 comments for this article