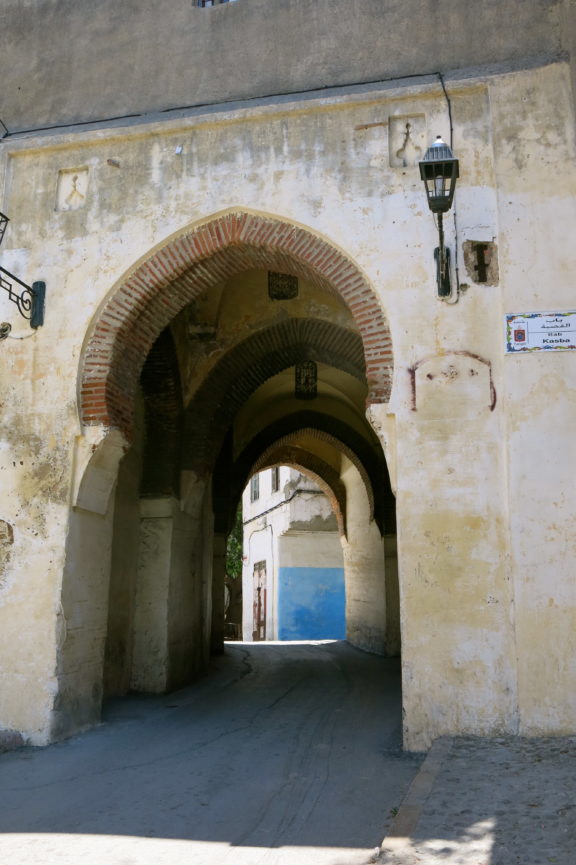 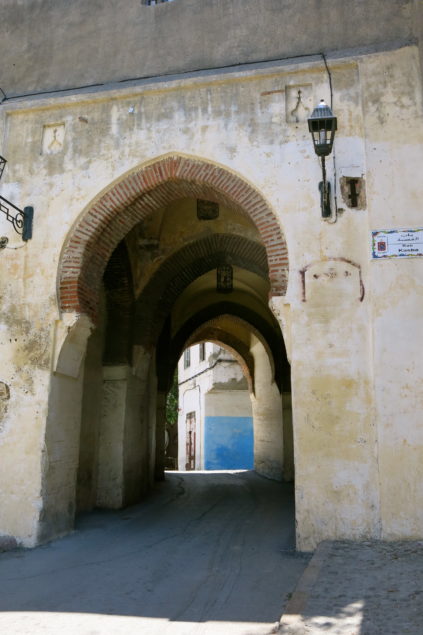 I was in Spain, a mere hop, skip, and a jump from Tangier. That was a temptation I couldn’t resist.

So I hopped the bus to Tarifa, skipped down to the port, and jumped onto the ferry, crossing the Strait of Gibraltar, to Africa. 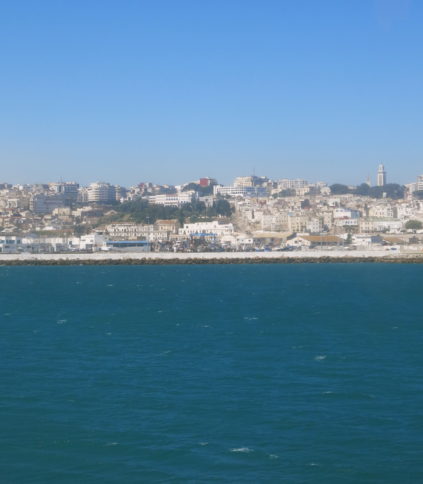 I landed in Tangier and set off to find my hotel, Dar Nour, a riad in the Kasbah.

Here were the directions they gave me:

The second light turn right – there are two streets on the right, it will be the second – the Hassan II avenue that runs along the cathedral, on top of which you will take the left Roosevelt Avenue.

You will pass on your left the stage, and the Pasteur Institute, after which you take the second street on your left (just before a palm).

This street draws several curves: go to the end where you will find a small slope overlooking a big arch, ocher-colored earth. This is the gate of the Kasbah.”

I took a taxi. 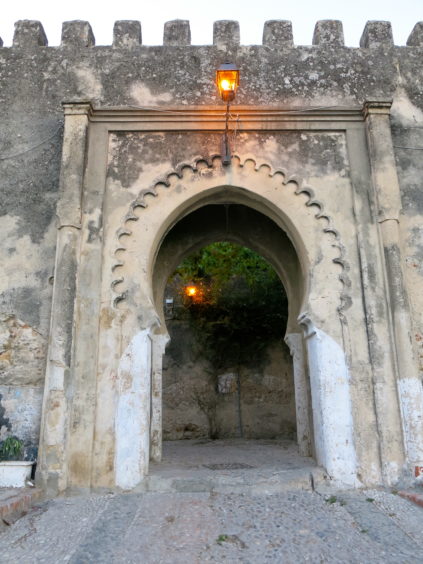 I walked through the arch into the Kasbah—a maze of crooked, colorful lanes.

Somewhere within those walls was my hotel and I set off to find it. 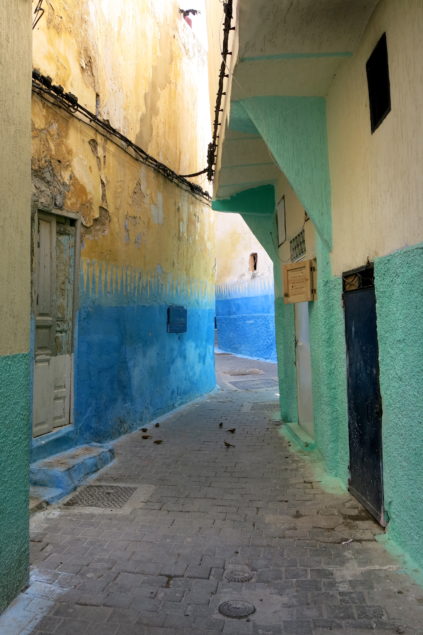 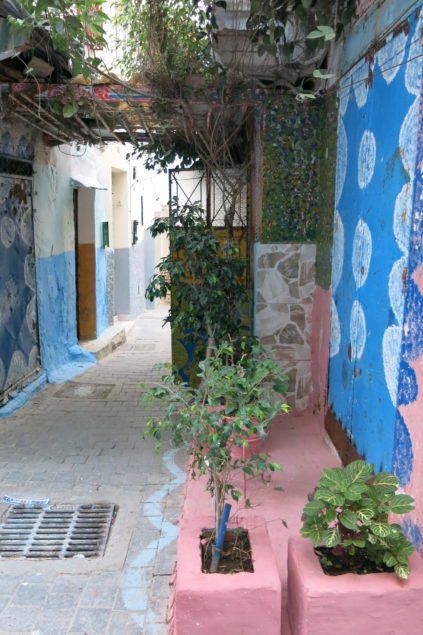 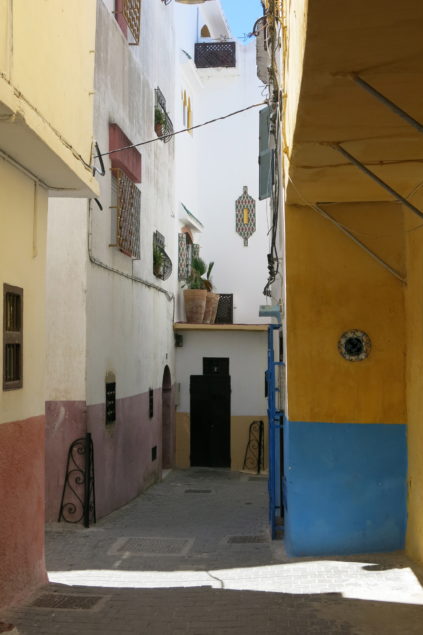 The Kasbah is one of those places where a map is useless. You just keep walking until you find your destination.

It was a bit like a big treasure hunt, as there were design gems everywhere I looked.

The Hand of Fatima was painted on walls and represented on door knockers, like this engraved brass one. It’s a symbol of power and strength, blessing and protecting those within. 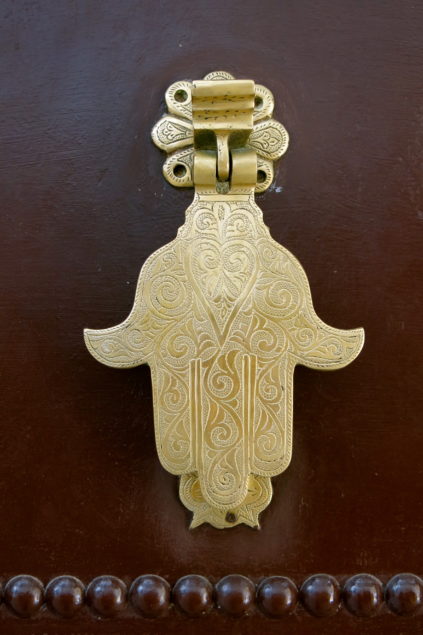 Green and blue mosaics framed this door, which was all dressed up with white embellishment on its iron bars. 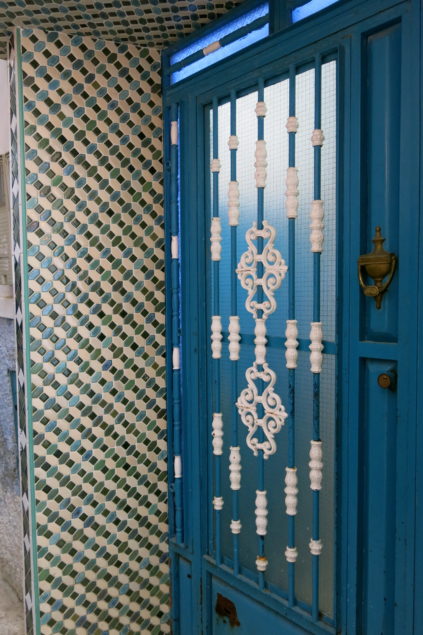 The painted colors and patterns were captivating. Even the streets were painted in front of some houses. 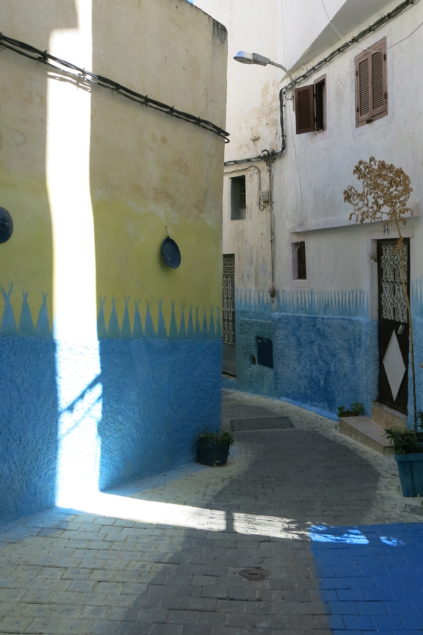 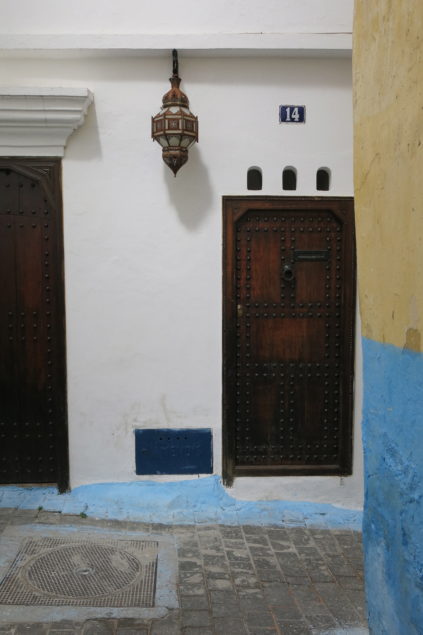 There were several intriguing shops along the way. 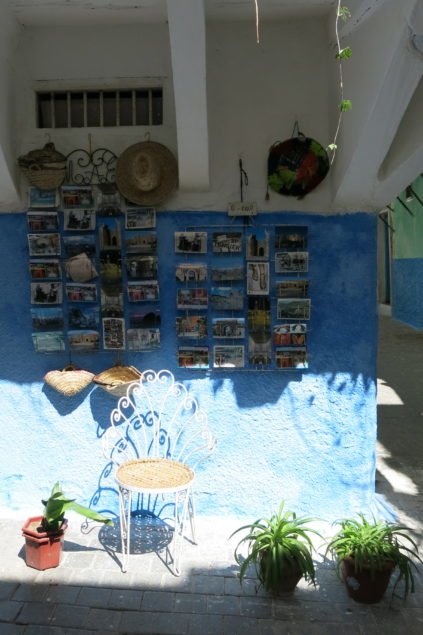 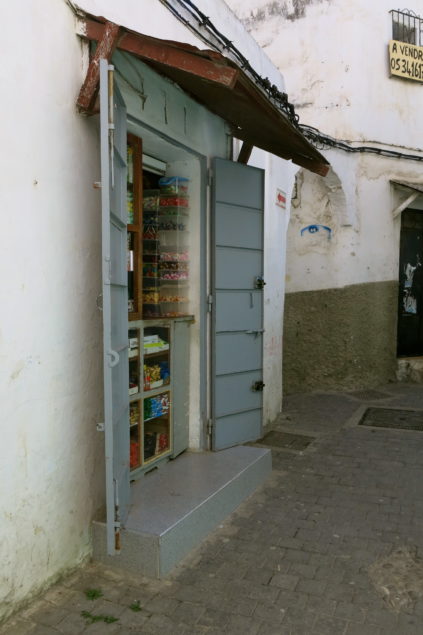 I loved the “signage” at this store. 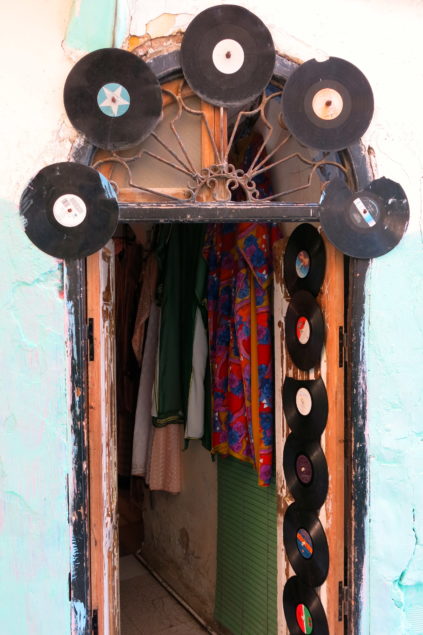 This one looked like they sold everything but the kitchen sink.

The pharmacy? Oh, the design details! Where do I even begin? 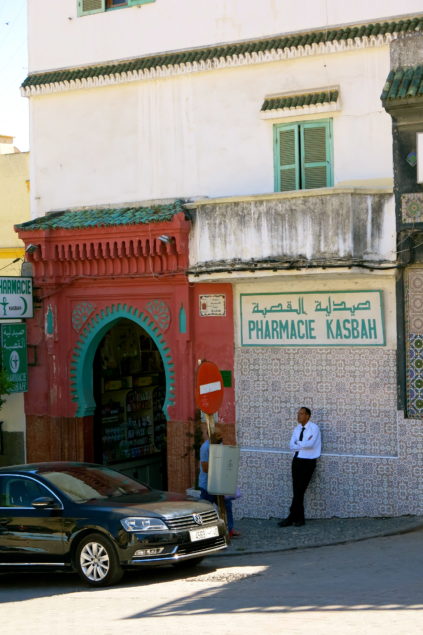 Outside this little shop was a display of baskets and wood-handled brushes.

I surmised that the fountain might very well be the center of the Kasbah. What that meant with regards to finding my hotel, I had no idea.

I noted it as a landmark, just in case. 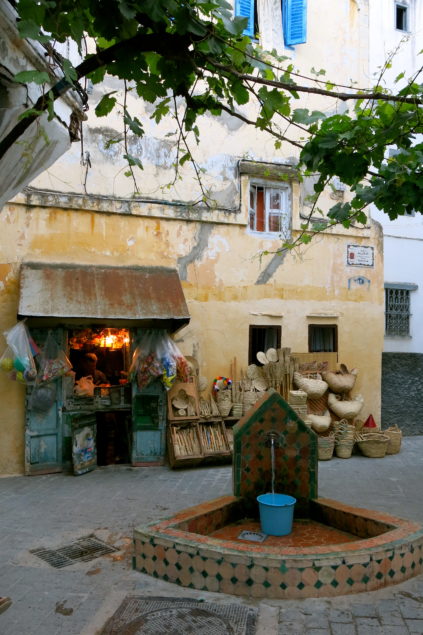 Not long after I speculated about being in the center, I found myself on the outside edge, by the wall that encloses the Kasbah. 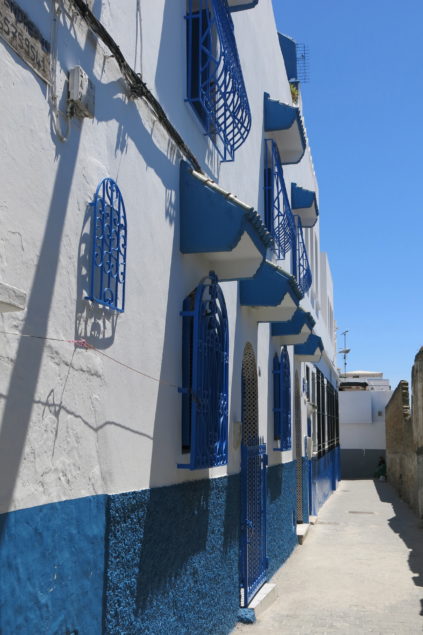 I turned the corner and saw the door of a school. 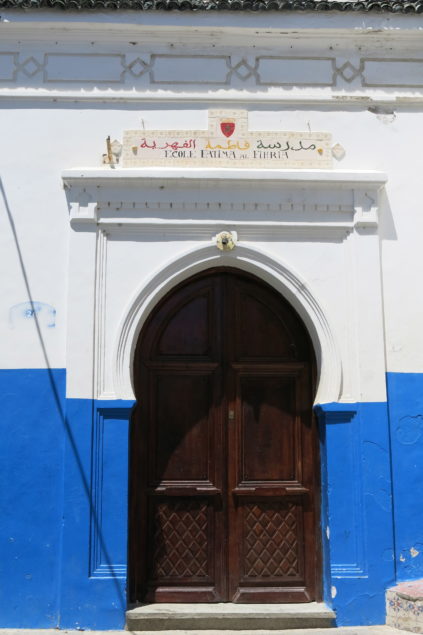 I passed by a mosque. It was Ramadan, so the mosques would all come to life at the end of the day, when prayer would replace fasting.

Nothing like a gorgeous ceiling to distract me from my own hunger pangs. 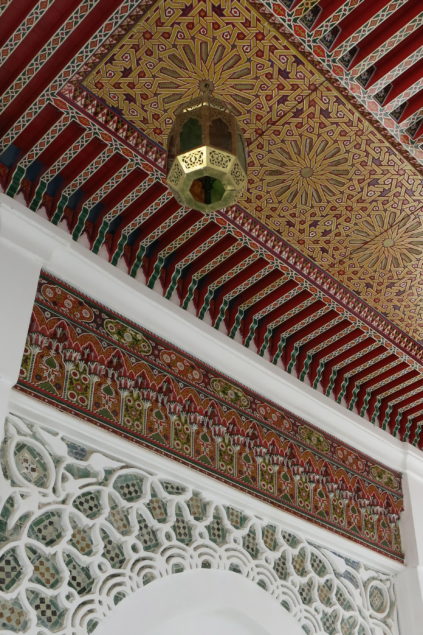 I kept walking, hoping I would find my hotel soon so I could drop off my suitcase and go in search of food. Or at least water. (Most restaurants are closed during Ramadan fasting time.) 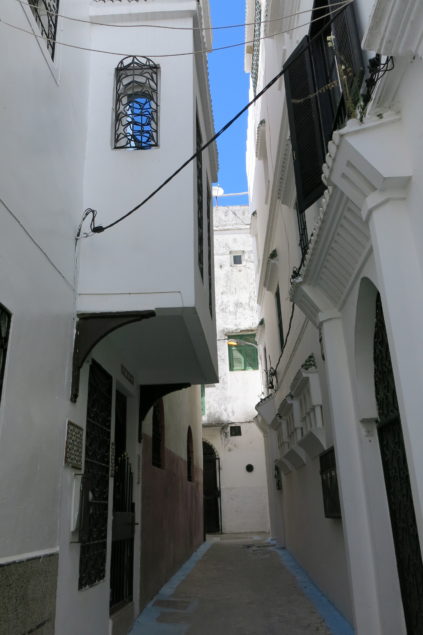 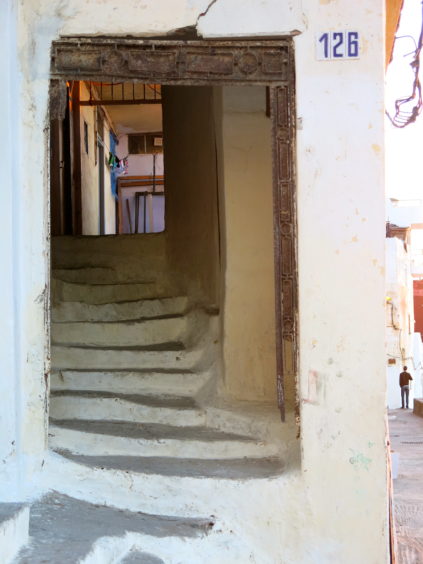 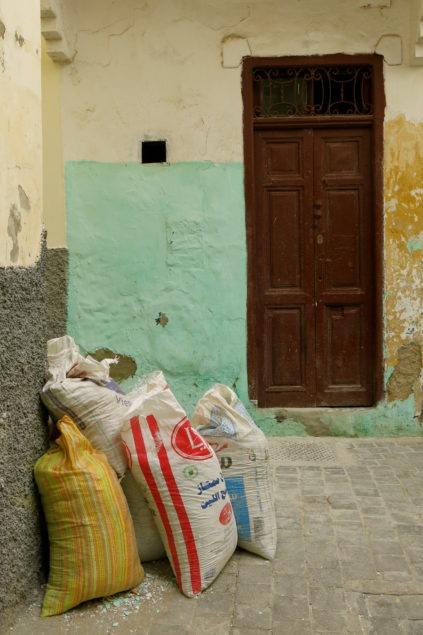 This is the women’s mosque. No comment regarding the segregation. 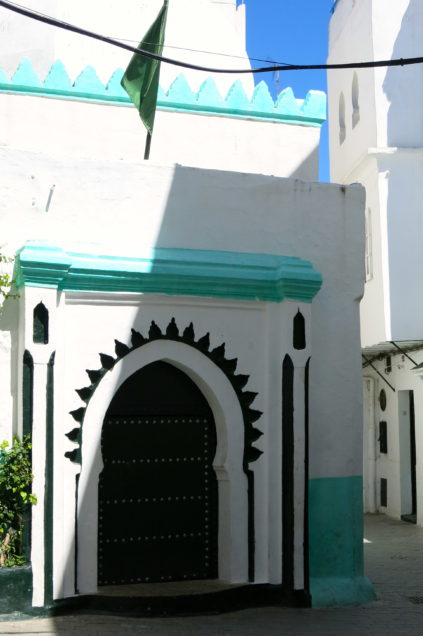 This sweet girl posed for me, and I loved that her dress matched her house. 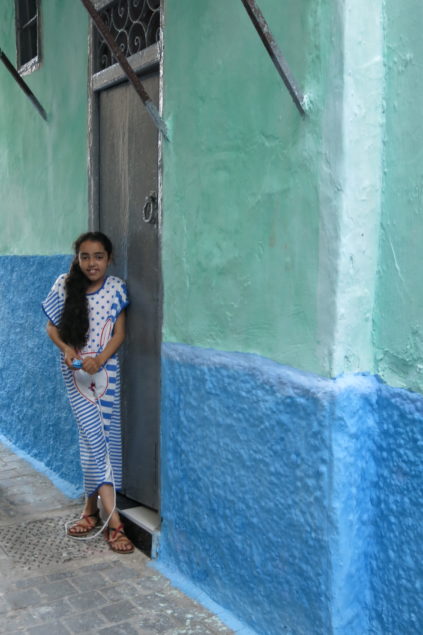 Who doesn’t love a row of Moorish arches? Fabulous.

When I saw the baskets again, I knew I had walked in a circle. Hmmmmmm. 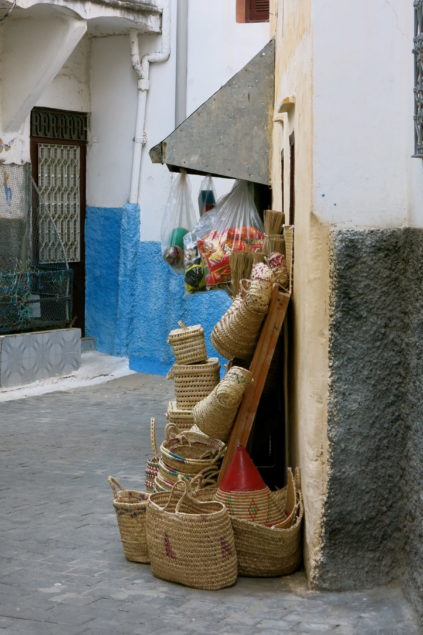 Then I came upon this stunning mosaic wall and bench. (Cue choir of angels.)

For a moment I forgot all about being hungry and thirsty and the fact that I was wheeling a suitcase all over the Kasbah, making a LOT of noise. 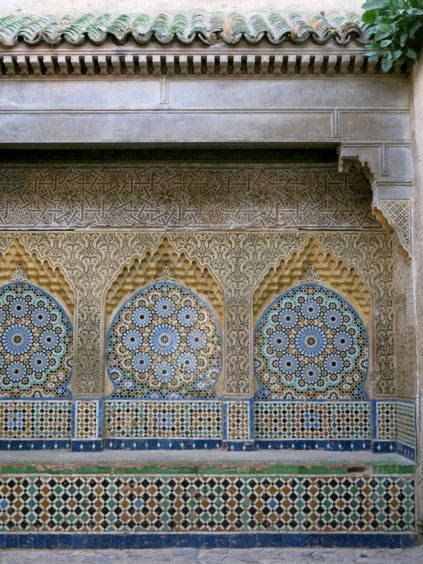 I wound around another narrow lane and was just happy that I hadn’t already seen it before.

Perhaps I was finally getting close? 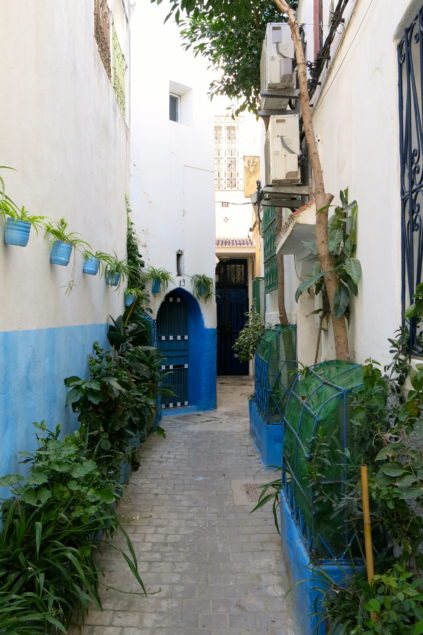 Okay, I’ll admit it—I had to call the hotel and they sent a young man to lead me there.

This is the door, tucked into a small alcove. Let’s face it, I never would have found it. 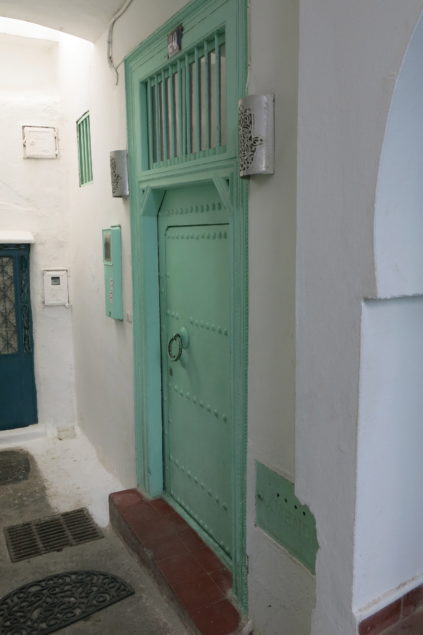 That’s okay, though—an adventure is never a waste of time.

“Not all those who wander are lost.”
-J.R.R. Tolkien