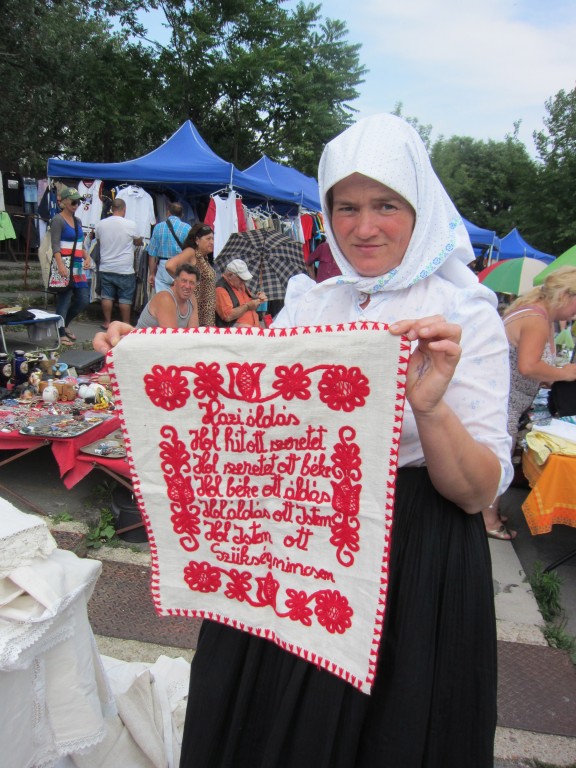 If a flea market exists in a city, I’ll find it. On Saturdays in Budapest, the Petőfi Csarnok in City Park fills up with vendors selling everything from bric a brac to shampoo, with some antiques thrown into the mix.

The Petőfi Csarnok is a concert venue, so there’s this funky band shell in the middle of it all. Tables are even set up on the stage.

It reminded me of the crazy flea market in Barcelona, except that most items were actually displayed on tables instead of heaped on the ground. The variety of the content, however, was similar…selling old and new random goods all in one place.

Curiously, one of the most abundant products for sale was money…piles of it. Boxes of coins, stacks of bills, and some even artfully arranged—old money appears to be a popular collector’s item in Hungary. (Believe me, I would have asked about it if I could have, but Hungarian is not a language I was able to master beyond “hello” and “thank you.”)

Second to money in numbers (no pun intended) was military memorabilia. Tables were strewn with medals, pieces of uniforms, military manuals and books, and even weapons—-remnants of the country’s communist past.

Former military leaders were there too—Lenin and Stalin together with the detritus of their era.

This woman may look innocent—but let me tell you, she was a shark. She was so aggressive, I caved and bought two homespun linen dishtowels—but she continued to pull out linens of all kinds, holding them in my face and urging me to buy more, more, more. I kept saying, in Hungarian, “thank you thank you thank you,” and finally managed to extricate myself—although I thought for a moment she might follow me around the market. 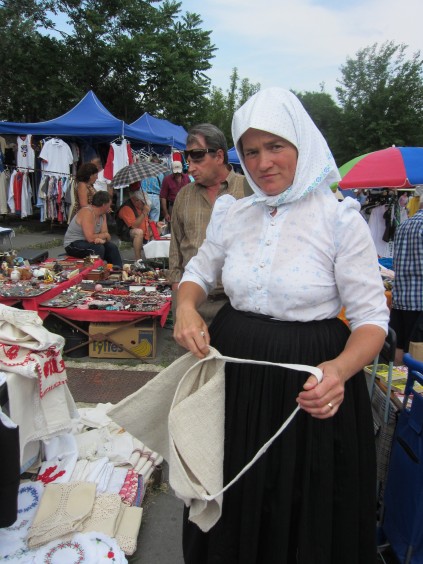 I watched this vendor meticulously lay out his merchandise in neat and orderly rows. I kept stopping back at his table for the pure relief of being able to see everything in one glance, rather than having to dig through mounds of dusty odds and ends.

Every once in a while there would be a gem in the heap—like this unusual porcelain pitcher.

This is the place to go if you need sardines, or a kitten…or a Mona Lisa.

This vendor drove a hard bargain, so I ended up walking away from him empty-handed. (My flea market rule is to buy nothing that costs over $20, and I wasn’t about to break it for a guy in short shorts and a tank top.)

I have no idea what this is but it’s obviously “beautiful.”

In the end, I bought the linen dish towels, a tiny ironstone measuring cup, a brass plate with those letters I love but can’t read, a small marbleized book that is a libretto for a Wagner opera, and a pretty blue milk glass jar with a metal cover.

Random, yes—but nothing cost even close to $20.