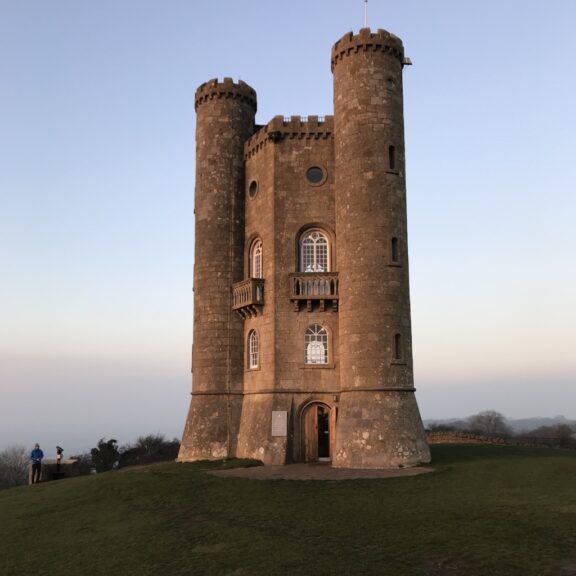 When I realized I was in the vicinity of the Broadway Tower as the sun was setting, I hightailed it down the narrow road and screeched to a stop alongside the adjacent field.

I confidently made my way across the field, heading to the tower.

Excitedly, I ran up to the gatekeeper, an old man with a tweed cap and a dour expression, babbling something about how, by sheer happenstance, I had arrived at the perfect time to see the sun setting from the top of the tower.

That’s when the mission fell flat. The man informed me that I would have to walk back across the field to my car (which was evidently parked illegally), drive down the road to the car park, and purchase a ticket in the museum. Then I could come back and go into the tower.

I followed his pointed finger with my gaze, down the hill to the museum in the distance. Then I looked toward the Western sky where the sun was setting. There was no way I would make it down and back in time.

So I begged and I pleaded, swearing up and down I would go and purchase the ticket and bring it back to him if I could just go to the top of the tower first.

Before the sun sets.

He stared at me as he considered my offer. I held my breath. And then he shrugged and waved me in, with a stern warning that I had better complete my end of the bargain.

In the 18th century, there was a popular trend for building “follies,” most often in the form of faux ruins and mock medieval castles and towers—to provide the aristocracy with picturesque and fanciful views.

Broadway Tower was created by the renowned landscape designer, Capability Brown, for George William, the 6th Earl of Coventry, a wealthy landowner with not one, but two, country manor houses. There is a rumor that the tower served as a signaling station used to notify the staff that the Earl and his wife were heading from one manor house to the other—giving them the heads up to prepare for the arrival.

But it was probably just a folly.

A folly with a view. The Broadway Tower stands on Beacon Hill, the second-highest point in the Cotswolds. There was a sign at the top noting the landmarks of the vista.

I couldn’t see White Horse Hill, but I Googled it later to see the prehistoric carving of the horse. (I recognized the horse on the hill from Robert Galbraith’s, aka JK Rowling, novel, Lethal White. Truthfully, I didn’t know it was a real thing until I saw this.)

As anticipated, the sunset views were spectacular. A herd of red deer wandered in the field below on one side. On the other, the landscape was dotted with white sheep.

I stayed at the top until the sun dipped behind the horizon. It’s not the first sunset view I’ve seen from an interesting vantage point in my travels, and it won’t be the last—but it was no less memorable.

I climbed back down, and obediently drove the 1/4 mile to the museum, where I purchased my ticket. There is no way I could have made it there and back in time for the sunset, so I was anxious to thank the tweed-hat man. I followed the path back up the hill to the tower.

When I got there, the man was gone. The teenager in his place looked up from his phone with a blank expression as I recounted the story. Then he unceremoniously plucked the ticket out of my hand and dropped it into the wooden box. Not the warm and fuzzy moment I had anticipated, but I was happy to have completed my end of the bargain.

(And I had a nice moment with a friendly sheep on my way back to my car. He even obliged when I asked him to pose for my photo.)