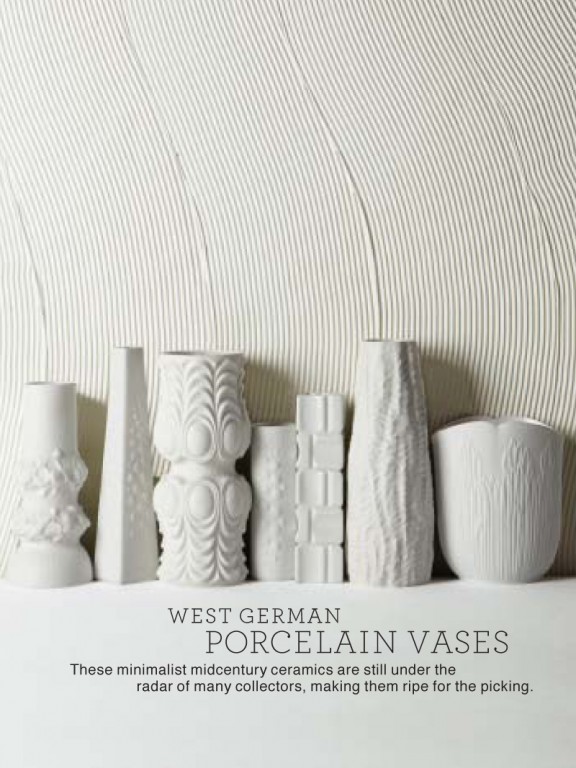 When I stumbled upon these white porcelain Mid-century West German vases at the flea market in Milan, I knew I’d found a treasure.  The editors at Martha Stewart Living magazine agreed, and they were photographed for “10 Collectibles We Love,” in the premier digital issue, launched last week for the iPad.

The vases were manufactured in West Germany between the 1950’s and 1970’s.  After World War II, traditional porcelain designs gave way to imaginative forms and textures that reflected the modernist movement of the time.  Some were inspired by nature, with textures of fossils and tree bark.

Others were designed in an endless variety of shapes and sizes, glossy glaze and matte, each vase more captivating than the next.  The vases are fascinating, both for their historical significance and for their remarkably distinctive forms.  Grouped together or standing alone, these striking white vases are as sophisticated and stylish today as they were when they were produced sixty years ago.

See the Objects SHOP page for photos, dimensions, and prices of the vases I found in Europe, which can be purchased by calling or visiting Connecticut Antiques Center, 850 Canal Street, Stamford, CT 06902; 203.355.9335.

For the Martha Stewart Living article, Buy the iPad app.