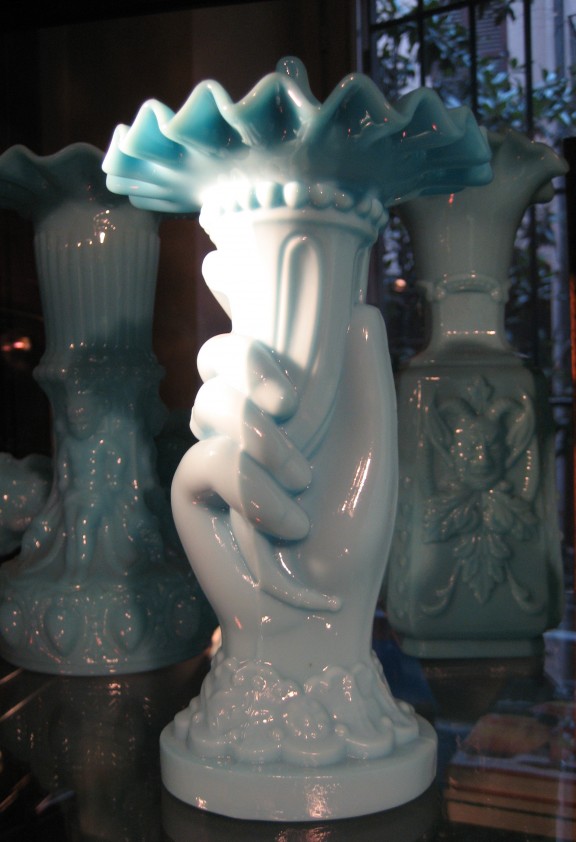 If the astounding collection of 19th century opaline doesn’t coax you into this antique shop, its charismatic proprietor certainly will.

Emanuele Belotti is a tall, dark, and handsome antique collector who welcomes you into his shop with such enthusiasm that you feel like he’s an old friend.  I know what you’re thinking but it was not, in fact, his suave Italian looks that made me go in, but a group of intriguing ladies…faces on a tea set in the window.

Emanuele told me that the set had been made by the famous Ginori company in Florence, in the first part of the 19th century, for the prominent Rocca family in Piacenza, Italy.  I love the vibrant orange glaze with gilded edges, and technicolor portraits painted inside oval frames of gold.

Then there’s the opaline…the milky, translucent glass invented by the French in the 19th century.

It’s rare to see so many pieces, and such a large variety of styles and colors.  As the glass was developed, metallic oxides were added to create different colors.

The shop, open since 1995, consists of two rooms furnished like a well-appointed home.  Chests, cabinets, and consoles from the 18th and 19th centuries sit atop warm Persian rugs, and display precious glassware and ceramics.  In the center of the main room are a grouping of contemporary velvet Italian “sofas” in bright colors.

The ambiance of the shop is warm and welcoming, and Emanuele’s passion and energy is contagious.  It’s decorated for Christmas now, but, honestly, it’s festive all year round.