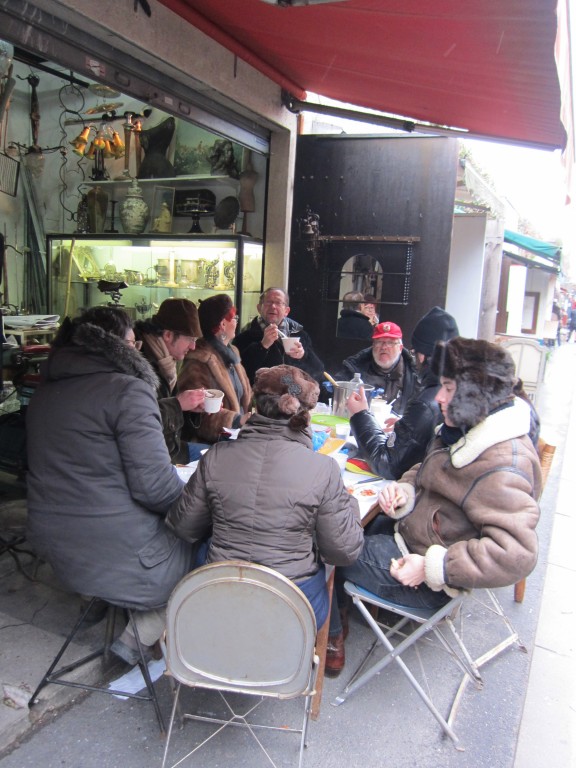 It’s cold and raining.  The Paris flea market, always a thrill for the first hour or two as the treasure hunt begins, has become less than thrilling in the cold rain.  Hands cold, feet cold, head wet, heavy bags.  Determined to get through Marché Paul Bert before I stopped for warmth and food, I trudged past a large table of “marchands” sitting down, as they do, for a civilized lunch.

The delicious aroma of a steaming pot of soup on the table wafted towards me.  “Très bonne!” I commented, as I passed.  “Have some,” the man at the head of the table said, in English.  “Non, merci,” I politely replied.  “Why not?” he said.

Soup was ladled into a bowl and passed over to me by a woman with bright red hair and a beret.

With the first spoonful, the warmth thawed my frozen bones.  I think it was the best soup I’ve ever had.  The man in the red baseball cap, who had invited me, turned out to be the chef.  He told me that it was cabbage soup, a traditional French recipe.  Beef and veal, leeks and carrots, some potatoes he had on hand, and a broth flavored with bay leaves and thyme…oh, so good.

The same group gathers every day of the marché, in fact, one man isn’t even an antique dealer…he just comes for lunch.  I was told I could join them anytime, no notice required.

All I have to do is show up.