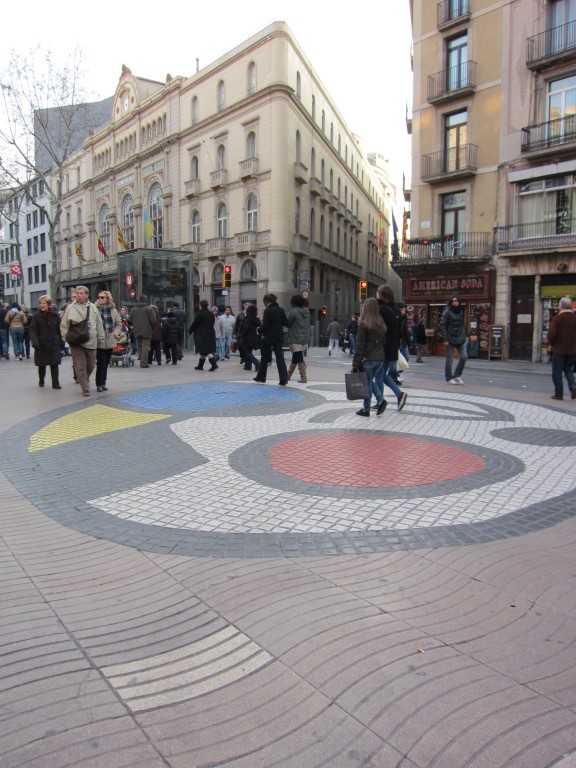 In Barcelona, Roman ruins share space with gothic architecture, surreal modernist spectacles, and a sandy beach.  The memorable art of Antoni Gaudí and Joan Miró adorns the streets next to graffiti that is of the moment.  It is a city buzzing with energy and full of surprises.  Follow me for a day through this dynamic city of colorful characters…

As I set off in the morning, I noticed a strange coppery-clothed man with a holster around his waist and a grocery bag in his hand, walking ahead of me.  It’s Barcelona, after all, so I didn’t want to judge, but I couldn’t help speculating.

When we reached La Rambla, the famous boulevard that extends through the center of the city, and I saw him stop to talk to a friend, the light dawned.

La Rambla, which stretches from central Plaça Catalunya all the way down to the harbor, is not only famous for its many street vendors selling everything from plants to pets, it is also renowned for its street performers.  Dressed in elaborate costumes, they persuade tourists to pay to have their photograph taken with them.  So it turned out that copper man was just on his way to work, carrying his lunch!

I forgave the vendors for their not-found-in-nature colored flowers, because when in Rome…(or, in this case of course, Barcelona.)

The bunnies and turtles and birds for sale by the pet vendors were irresistible to children and, by association, their parents.

And there, in the middle of the street, being trampled on by tourists, many of whom don’t even notice it, is a signed Miró mosaic.

The graffiti artists have big shoes to fill in this town, and I have to say, I saw some exceptional street art.

Speaking of shoes, I had to check out the espadrilles that have been made by La Manual Alpargatera on Carrer Avinyó since the 1940’s.

The jute-soled, canvas shoes are stored in floor to ceiling shelves, sorted by color (a rainbow of variations), size (from child to adult), and style (flat, wedge, slip-on, or ankle ties.) At less than 20 euros a pair, I did not walk out empty-handed.

In Plaça Sant Felip Neri the air is scented with the soaps of Sabater Hermanos.  The granddaughter of the founder of this seventy year old Buenos Aires business runs the shop in Barcelona. If the aroma hadn’t drawn me in, the fabulous art deco logo would have.  I’m a sucker for a great logo.

The cubes of soap, imprinted with the logo, are made with forty different exotic scents, from fruity to earthy to feminine, in as many colors.  I chose lemongrass, magnolia, and lavender.  (I passed on the chocolate and cannabis soap…not scents I would want to bathe in, but that’s just me.)

I have no explanation for this next photo…except that this little encounter stopped me in my tracks. What could they possibly be talking about?? (Don’t you love the little dog in his spiderman jacket?)

Their specialty is tortillerías (omelets) and there are 70 different kinds. (I tried the potato, onion, and bacon.  It was round like a pancake, and fluffy.) The restaurant is a favorite among locals, frequented by everybody from young professionals, to hipster artists, to retired businessmen, to local workmen.

The plaza in front of the Museum of Contemporary Art is an arena for skateboarders, and there is always a crowd there, from early in the morning until late at night.

Don’t ask me where I’ll put it, because I have no idea, but after spending relaxing evenings swaying in my hotel hammock, I had to have one.  Marañon Hammocks is hammock heaven.  The owner is Jan, a friendly guy from Holland, who has traveled extensively throughout South America, where most of the hammocks are made.  The walls and ceiling are hung with brightly colored hand woven hammocks in a variety of shapes and sizes, with or without fringe or embellishment.

I chose a simple ecru and ochre striped hammock, and then wondered aloud how and where I was going to hang it.  Jan told me that he keeps a hammock in his car, with special apparatus that can be used to attach it to two trees in a matter of minutes…just in case he wants to stop for a rest.

I bought the special apparatus.

At this point, the Mediterranean calls…I can smell the salt water and I follow my nose toward the harbor. There’s outdoor cafe’ tables lining a sunny boardwalk, and in the space of a few blocks, I feel like I’ve been transported to another city.

Suddenly, I am at the beach, with the landscape of the city behind me.  I marvel at the juxtaposition of the dynamic metropolitan city with the sandy beach and ocean vista.  Because it’s winter, it’s quiet and peaceful.

The shadows are getting long, and it’s time to head back to the city center for the evening.

It seems that Barcelona is even more alive at night.  The locals have had their siesta and are ready to party.  Stores stay open until 10 or 11, and restaurants and bars are spilling over with jovial crowds.

Dinner is at my favorite local tapas restaurant, Bar Lobo.  It’s a funky, friendly place with steel top tables and paper lanterns hanging from the ceiling.  It is always crowded, and always lively.

I ordered a glass of cava, a tomato and mozzarella salad, and fried eggplant with honey.  (I’d seen the eggplant served to another table and was intrigued.) All was delicious.

The day is done, and Barcelona rests…until the extraordinary spirit of this remarkable city awakens to a new day.