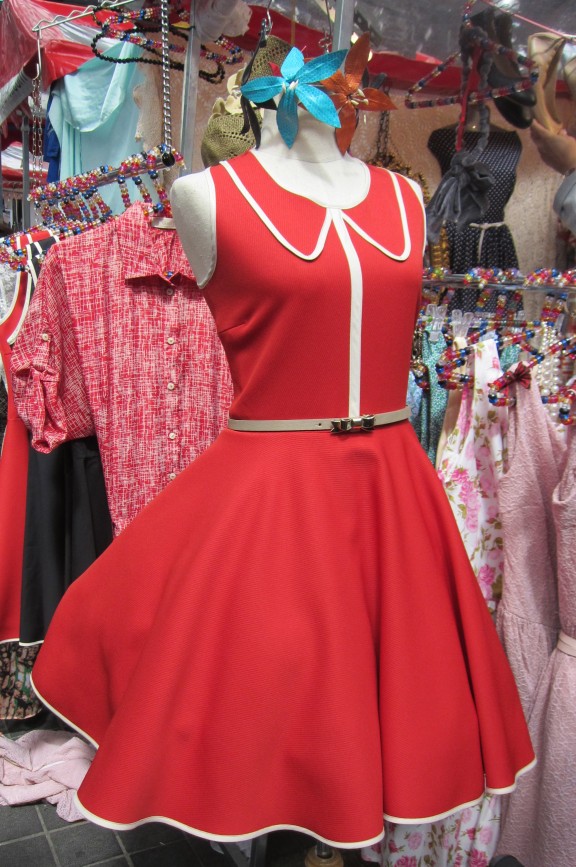 On a London Saturday, the Portobello Road antique market stretches through Notting Hill. On Sunday, across town, is Old Spitalfields Market…a market of a very different color. Each day of the week, various vendors sell their wares here, but Sunday is when the covered market comes to life, with the creations of young artisans and craftspeople.

In 1692, King Charles II granted permission for a market to be held at Spittle Fields, as it was known at the time. In the late 19th century, large warehouse type buildings were built to house the market. Known as the Horner Building, for the man who had them built, this well-restored covered market is now the home to London’s popular Old Spitalfields market.

The enormous market is buzzing with energy…music is blaring and the atmosphere is like one big party.

Whether they were my taste or not, I was awed by the creativity of the clothing designs. Enterprising young designers have mannequins and racks adorned with their handiwork. Customers try on clothes in the midst of the mayhem of the market.

One of the most creative fashion collections was by this designer, who used mens clothes to make chic clothes for women.

Colorful retro dresses seemed to be all the rage.

Lost Apostle jewelry is made of polished cast bronze. The pendants are on leather lanyards, with do-it-yourself clasps that can be attached once you choose the length. They have an interesting marketing gimmick: A monthly competition to win a pendant, by posting a sticker with their logo somewhere original, and e-mailing them a photo of it.

T-shirts were hand silk-screened, hand painted, bejeweled, and flowered. I thought this one was particularly artful.

There was charming children’s clothing, from traditional booties and hats, to simple shapes with a retro spin.

These colorful knitted finger puppets fit into clever pouches…monkeys in a banana, bunnies in a carrot.

This booth simply had a table heaped with hundreds of silk scarves, 1£ each.

Outside the covered market is the jam-packed Brick Lane open market. This part of London is predominantly Bengali, so the street food is deliciously exotic and spicy.

Finally, it wouldn’t be a funky market without games, Socialist propaganda, a street musician…