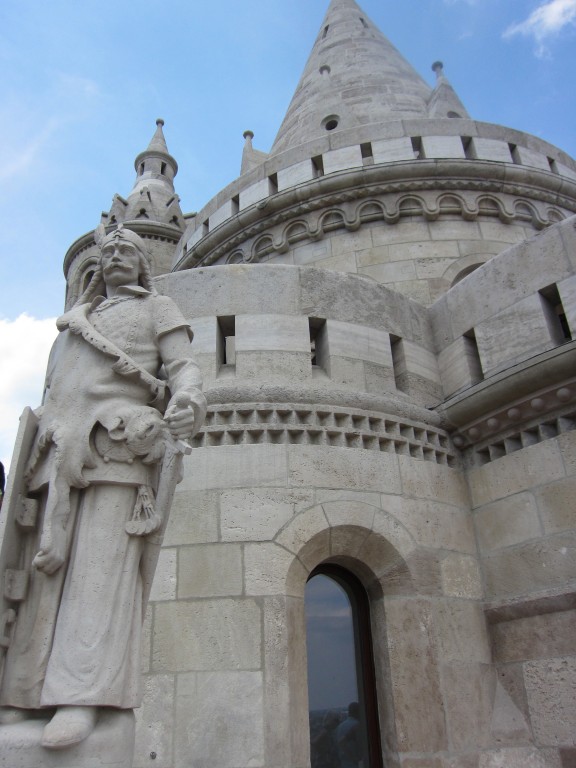 The golden age of Buda castle was in the Renaissance, during the reign of King Matthias. Today it is a tourist destination…a chance to wander the cobblestone lanes of Budapest history, and to look over the Danube River to the stunning view of Pest.

Buda’s Castle District is reached by a funicular leading up to Dísz tér, the castle compound.  As the funicular rises, the view widens.

The streets are lined with charming houses…

…and many, many souvenir shops.

I loved the Barbie dolls dressed in Hungarian costumes.

The tantalizing aroma from this pastry shop stopped my in my tracks. (Think Cinnabon aroma in the airport!) I watched this woman make the traditional kürtőskalács, also known as chimney cakes, by wrapping dough around a wooden cylinder and then rolling it in sugar that is baked into a caramelized crust in the little brick oven.

Sadly, it looked, and smelled, better than it tasted…

A young girl playing the violin, and a couple of guys singing traditional Hungarian songs, provide the soundtrack.

All streets lead to Matthias Church, which was first built in the year 1015, reconstructed in the 14th century to reflect the changing architectural style, and restored in the 19th century.  (The intriguing diamond-patterned tiles on the roof were highly controversial when added by Frigyes Schulek, the architect responsible for the restoration.)

The Halászbástya, or Fisherman’s bastion, also designed by Schulek, was built in 1895.  It’s a kind of Disney castle, masquerading as a medieval fortress, and provides a magnificent view across the Danube to the Parliament building and beyond. The name, Halászbástya, was taken from the medieval guild of fisherman that defended this stretch of the wall.

At this point, there are two choices for exiting.  You can walk back to the funicular through the tourists that have now multiplied by the hundreds, or climb down the scores of mysterious steps to the river.  (For me, steps beat tourists.) There’s no map that really illustrates this path, but if you keep going, you will eventually reach the bottom.

There’s a fascinating monument on the way down…a man seeming to plunge to his death from a tall stone wall.  It is a memorial to Peter Mansfeld, who, at the age of 16, participated in the 1956 revolt against the Hungarian communist government.  He was tried and sentenced to death by the extremist government of the time, and is now remembered as a national hero.

At the bottom is a bustling square, a beautiful church called St. Anne, and a vendor selling buckets of daisies and bunches of lavender.

Next stop, the Széchenyi Chain Bridge, and a walk across the Danube River to the other half of Budapest!