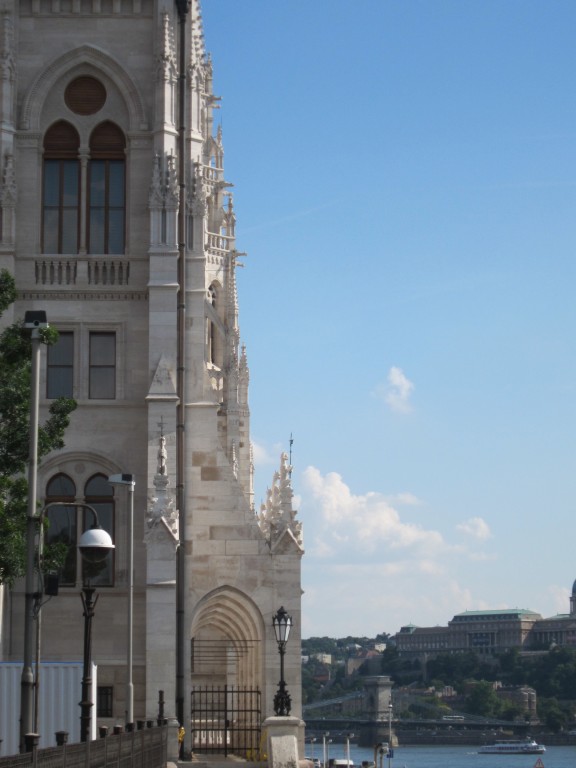 Pest (pronounced “pesht”) is the nerve center of Budapest.  It is both contemporary and old world at the same time.  There are many curiosities about this unique city…trams that go both ways on the same track, currency with an exchange rate of 183.84 to the dollar (figure THAT out when you’re debating a purchase), words that look like art, three street signs for each street, public baths filled with medicinal water from underground springs, fashions that will never be seen on a runway…

I enjoyed my first lunch sitting at a table outside in the warm breeze, soaking in the character of daily life in Budapest.  With no hope of reading the menu, I ordered what the locals were eating…a meal that turned out to be breaded, fried brie, rice, and cranberry sauce.  Sounds weird, I know, but I can tell you it was good at the time.

This is what the street signs looked like on the sides of buildings.  When I first saw them, I was determined to decipher the significance of the 3 signs and many symbols.  I left Hungary without ever finding out the answer.

The thermal baths of Budapest are a spectacle of fanciful architecture surrounding pools filled with healing waters that people travel for miles to soak in.

The subways here have beautiful old red and white tile, and inside the subway cars are real leather straps.  I hate to use the word “quaint” but if the shoe fits…

Let me stop here to give you a word of advice.  If you ever go to Budapest, you will read in all the guidebooks and online information that you should immediately purchase a “Budapest card.”  The sign was the first thing I saw upon coming through customs, so, thinking I was very clever to get it right away, I went to the window and handed over approximately (exchange rate still a mystery) $50 for the magical card that would get me into all museums and attractions free, and allow me to ride public transport without a ticket.

The truth of the matter is, no one ever checks for your tickets on the trams, and not one museum, church, or attraction, accepted the Budapest card for admission.  It was at first frustrating, but soon just became hilarious as I held out the card at each location, waiting for the inevitable head shake, “no.”

The fashions of Budapest have little to be desired…then again, maybe they are just ahead of their time…?  (Though I can’t imagine anyone that would look good in these shorts.)

As always in a new place, I am intrigued by the details…a shuttered window, a delicate yellow railing winding through the park, an ancient door, fleur de lis on a flight of stairs, a bright red mailbox, stairways in hidden courtyards…

Café Vian has the best paprikáscsirke (a traditional Hungarian dish of chicken, onions, paprika, and a sour cream sauce, served with potato dumplings) but what I will remember most about it is the obsessive-compulsive waiter that couldn’t stop himself from lining up the salt and pepper, straightening the placemats, and rearranging the ashtrays as he took orders.

The café sits among others in the beautiful Liszt Ferenc tér, a leafy square where composer, Franz Liszt, once lived.  His house sits at the end of the square, and a little girl danced around his dramatic statue.

In the Városliget, or City Park, there is a small lake where there was a contemporary art installation called, oddly in English, “Art on the Lake.”  In the lake were sculptures created by artists from all over Europe, and a floating platform filled with colorful bean bag chairs for lounging.  The Vajahunyad castle sits behind the modern sculptures, making for a quirky scene of juxaposition.

Across town is the magnificent Gresham Palace, a stunning example of 19th century Art Nouveau design.  It is now a Four Seasons hotel, with a first-rate restaurant serving updated versions of traditional Hungarian food.

Art Nouveau design from the 19th century can be found all over the city, often unexpectedly, like this lamp post in front of a modern office building.

The old and new of Pest sometimes clash abruptly, and other times appear to be perfectly normal in this captivating town that is evolving and moving forward at the same time that it is anchored in history on the banks of the Danube.

This is not the last you’ll hear from me of Budapest…stay tuned for more colorful characters and remarkable sights.