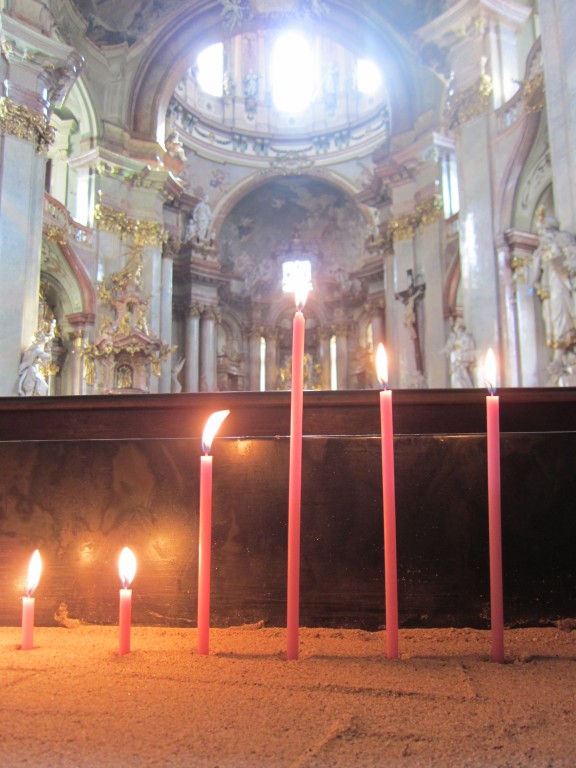 After grappling with the “no photograph” rule in Vienna museums, I rejoiced in seeing this little sign at the entrance of St. Nicholas Church in Prague.

This enchanting 17th century Baroque church had me at hello with the sign, but the red-headed twins in the ticket booth sealed the deal.  They were not only two of the happiest, and most charming, people I’ve ever encountered in a ticket booth, they were also exceedingly helpful…finishing each other’s sentences as they clued me in on the best place to sit for that evening’s organ concert.

The green dome and bell tower of St. Nicholas Church (lower left) are an inseparable part of the Prague castle skyline.

I loved the decoration on the massive doors.  Even the hinges were beautiful.

Inside, the lofty cathedral is embellished with velvety frescoes, gilded sculptures, and elaborate altars created by Baroque artists.  The best part was that I got to take as many pictures as I wanted.

The artist who painted this fresco apparently miscalculated the space he would need for this man’s foot, so he just extended it off the edge.  I don’t think I’ve ever seen that before.

High above the sanctuary, the organ sits on a balcony. (During the concert, later that evening, you couldn’t really see the musicians, so the music magically floated above our heads and around us, enveloping the audience in the ethereal strains.)

On the climb up the narrow stairs to the balcony, I passed another ancient door with ornate hardware.

At the top, the balcony railing was etched with names and years from long, long ago.  Was it done by young priests?  A choir of boys?  19th century tourists?

Visitors from all over the world have left pictures of their loved ones at the base of this statue of St. Nicholas.  He is known for his generosity to those in need, and his love for children.  Legend has it that he threw gold into the home of a poor man who could not afford dowries for his daughters.  This legend evolved into the custom of gift giving, and St. Nicholas became “Santa Claus” in English-speaking countries.

Here, St. Nicholas remains a symbol of hope, as he is entrusted with the care of these anonymous, precious, souls.

Perhaps it is the spirit of St. Nicholas himself that makes this church such a welcoming place.  He is surely supported in his calling by the lovely twins at the door, and by whoever thought to post the little sign allowing me, and the rest of the world, to take pictures.

Sure, it’s fine to see a place and remember it…but there’s something about a picture that takes you right back there.