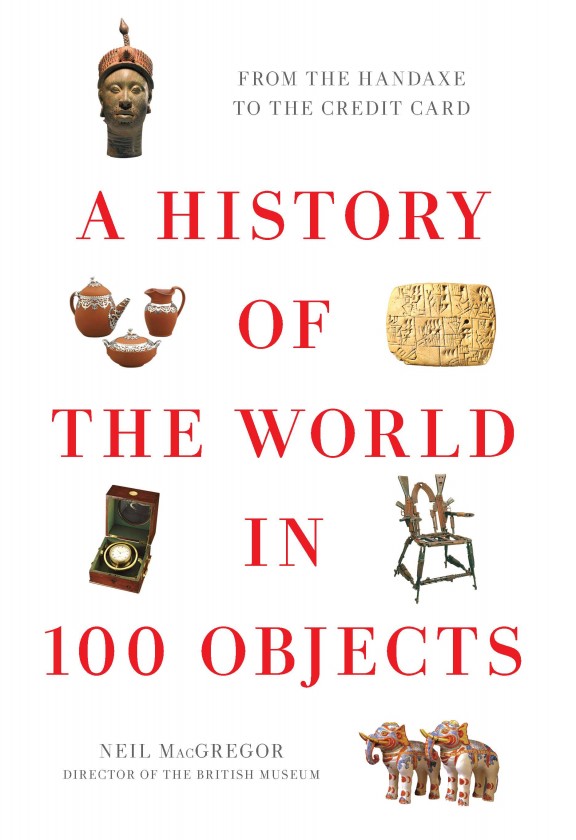 One needs only to look at the objects of daily life to understand the civilization from which they came.  From the most rudimentary carved stone tools to the credit card, these objects mark the progression of human intelligence through the ages.  In his book based on a BBC series, Director of the British Museum, Neil MacGregor, illustrates the story of human development through 100 objects…and, as Henry Ford once said, “Every object tells a story.”

Here are a few highlights from the centuries of objects in the book:

Found next to human bones in Tanzania, Africa, the carved stone tool is among the oldest known humanly-made objects created anywhere in the world.  It speaks of the way of daily life at this time in history, and of the development required of the human brain in order to develop tools needed for survival

“This object sits at the base of a process which has become almost obsessive among human beings.  It is something created for a particular purpose, and in a particular way, with a notion in the maker’s mind of what he needed it for.”

This piece of clay, measuring 4 by 3 inches, and made over 5000 years ago, is one of the earliest examples of writing that we know.  Early “literature,” if you can call it that, was more about record-keeping than prose.  This relic is actually a documentation of beer rationing.  It tells us not only about how people first wrote, carving into clay with a sharp reed, but also about the beginnings of bureaucracy.

“The tablet is a first sign of writing; but it also tells you about the growth of the early beginnings of the state. You’ve got a civil service here, starting to come into place in order to record what’s going on, and here, very clearly, is the state paying workers to keep track of the public finances.”

This hand-carved jade axe is about 8 inches long and 3 inches wide. It was clearly a treasured object, intended to be admired, not used.

“Biographies of things change over time, as new technology allows us to ask new questions of them.  The most striking instance in the book is the jade axe from Canterbury, whose origin we can now trace to the very boulder from which it was originally chipped, high on a mountain in northern Italy.  This gives us a new understanding of trade routes of early Europe, and a fresh set of hypotheses about the axe itself, especially valued, perhaps because it came from above the clouds and far away.”

In a world where things have been predominantly made, commissioned, or owned by men, here is an object that carries with it an act of protest by women.  Over the portrait of King Edward VII, is a crude stamp reading,”VOTES FOR WOMEN.”

“At the start of Edward VII’s reign women, along with the poor and criminals, were denied the right to vote. Mutilating coins was one of the methods suffragettes used to spread their message of universal suffrage to a wide audience.

As well as conventional campaigning, the suffragettes also attacked museums, famously slashing The Rokeby Venus, a painting in the National Gallery, in 1914. They also smashed a mummy case in the British Museum. In 1918 the Representation of the People Act gave women over the age of 30 the right to vote but it was not until 1928 that women were given the same voting rights as men.”

This little plastic rectangle is most likely the invention that has had the most impact on the daily lives of people in the twentieth century.

“Credit cards bring home to us daily the fact that money has now lost its essential materiality; money spent through them is always new, fresh, and unused.  It can be called up virtually anywhere in the world instantaneously.  Where as all the coins or banknotes had king or country marked on them, credit cards acknowledge no ruler or nation in its design and no limit to its reach, other than an expiry date.”