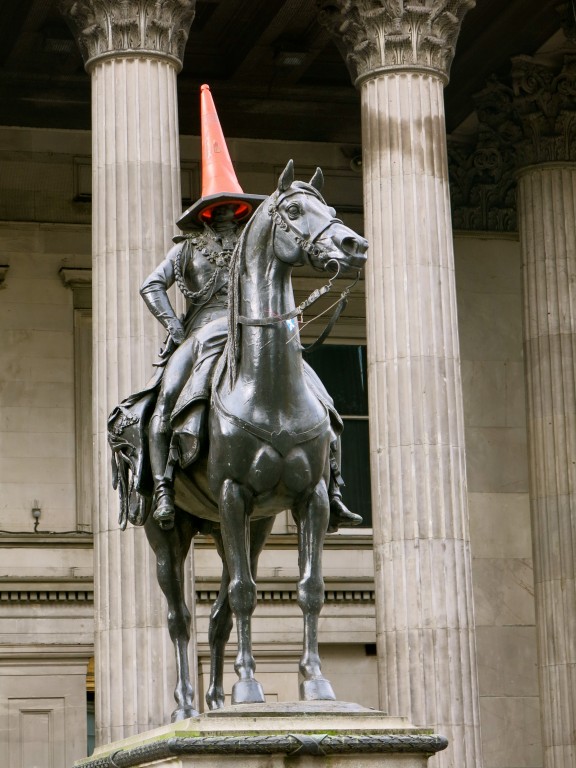 In front of the Glasgow Museum of Modern Art stands a statue of Arthur Wellesley, 1st Duke of Wellington, sculpted by Italian artist Carlo Marochetti in 1844.

For as long as anyone can remember, there has been a traffic cone on his head.

For the past thirty or so years, the traffic cone has been removed (by the police) and replaced (sometimes on the horse, too) countless times – most likely by rambunctious pranksters on their way home from the pub.

Last year, the Glasgow City Council and the police, who had long warned that it was a criminal offense, and that people could get hurt climbing up the twenty-foot statue, decided that the best course of action would be to double the height of the base on which the Duke and his horse stood – thus preventing folks from climbing it.

There was an uproar, resulting in public rallies, a social media storm (Twitter #conegate, 85,000 likes on a “Keep the Cone” Facebook page), and an online petition.

The statement on the “Save Wellington’s Cone” petition (which raised over 10,000 signatures) said:

“The cone on Wellington’s head is an iconic part of Glasgow’s heritage, and means far more to the people of Glasgow and to visitors than Wellington himself ever has.

Raising the statue will, in any case, only result in people injuring themselves attempting to put the cone on anyway: does anyone really think that a raised plinth will deter drunk Glaswegians?”

In November, 2013, the City Council backed down under the pressure.  They simply gave up.

And so, the cone remains, a witty symbol of a city with a sense of humor.