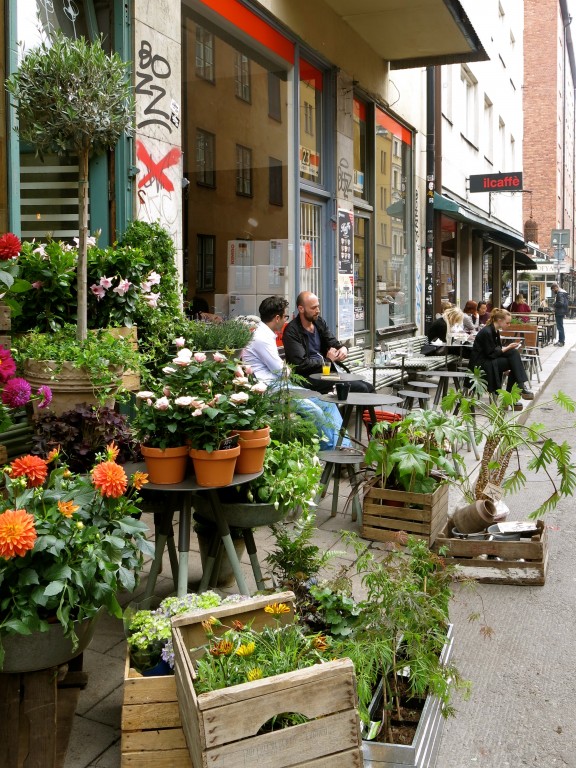 The hip and happening area of Södermalm has been getting a lot of attention in the past few years:

It was recently ranked as one of Vogue magazine’s “World’s Coolest Neighborhoods.”.

And from the New York Times: “Södermalm has evolved from a gritty, working-class neighborhood into Stockholm’s hippest district, with the area south of Folkungagatan — nicknamed SoFo — the trendsetting epicenter of the entire city.”

Starting with lunch at Urban Deli, here’s some of my favorite stops and shops in SoFo.

Urban Deli is a restaurant, bar, deli, and store, all rolled into one hipster place.

There’s fabulous daily lunch specials (pasta carbonara, eggplant gratin, barbeque trout, to name a few) and a help-yourself counter of salad, bread, and coffee.  Everything is freshly made and delicious, and it’s perfectly located for a stop in the action during a day in SoFo.

Nordlings Antik has some of the most incredible 20th century Scandinavian antiques that I’ve ever seen – like these c. 1960’s “Koristepullo” hand blown vases, designed by Nanny Still.

The family business has been there since 1972, and the owners are extremely knowledgeable about the artists and craftspeople of the period.

I was particularly fascinated by the collection of teak salt and pepper mills, designed by Jens H. Quistgaard, in the 1960’s.

These stunning mid-century brass candlesticks and vases were designed by Pierre Forsell.

Grandpa was a store I spent a lot of time in…perusing the eclectic mix of (both vintage and new) clothes, shoes, jewelry, and home accessories.

Her delicate pottery is both made and sold here.

Antique store Wigerdals Värld, is a treasure trove of mid-century Scandinavian teak furniture, lighting, tableware, and accessories. Mats Wigerdal (seen on the phone in my photo) is the friendly proprietor.

Herr Judit, down the street from Wigerdal’s, was a style moment palooza.

That’s it for today, but keep in mind that this is just a sampling of the multitudes of groovy shops and restaurants in SoFo.

The strategy is, as always, to wander.

[Trivia note: Södermalm is the home of fictional crime-fighting journalist, Mikael Blomkvist, in Steig Larrson’s “Girl With the Dragon Tattoo.”.]