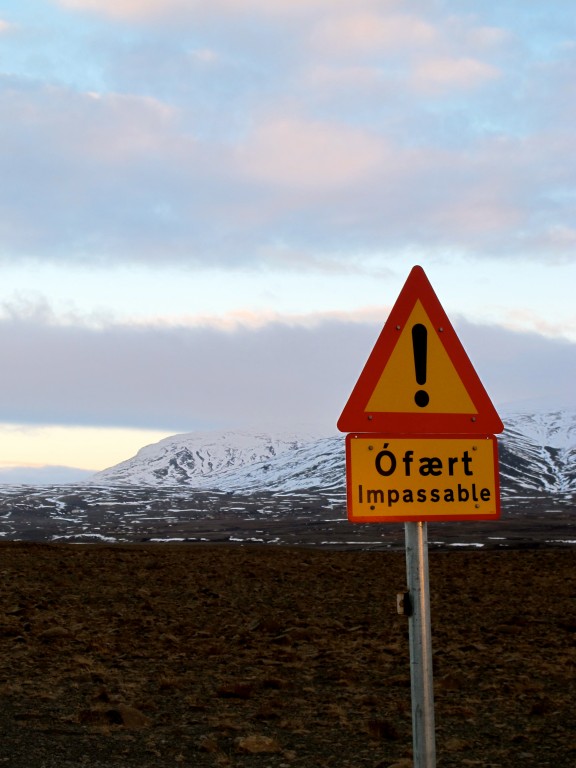 The sign at the foot of the glacier said, “Impassable,” but that didn’t stop us from heading onto the frozen plateau and into a treacherous adventure…but let’s start at the beginning.

A couple years ago, my son and I went to Iceland for Christmas, and I thought it would be a memorable experience to take a journey onto a glacier on Christmas Eve.

The snow-capped mountains in the distance were barely visible.

Biggi, short for Birgir, was the name of our guide, and the driver of the “4 X 4 Superjeep” that would take us on the route of the “Golden Circle,” looping from Reykjavík into central Iceland and back…including onto the massive Langjökull.  (Icelandic for “long glacier.”)

Our first stop was Þingvellir, by the river, Öxará.

A word about the Icelandic language…it is one of the oldest still being spoken, and, as the words sound nothing like they look, I could only pronounce them immediately after I’d heard them.  So, regrettably, I can’t tell you how to pronounce these.

Anyway, Þingvellir is of utmost importance to the history of Iceland, being the site of the Vikings first parliament in 930 AD. The law of the land was decided here, and continued to be so until 1798.

Off we go to the next landmark, Laugavatn lake.  The sun is starting to come up.

The vast barren landscape of lava fields is punctuated by occasional billows of steam erupting from geothermal heat pumps.  Iceland has five geothermal plants that produce the nations’ energy, by tapping the heat of the earth’s volcanic core.

There was a sign along the road for a picnic area under the trees.

The only thing is, there are no trees. (Rumor has it, the Vikings used all the trees for their houses and ships, and didn’t replant new ones.  That, along with the volcanic lava that washed over the land, pretty much eliminated any chance of future trees.)

The horses are unusually small, and very furry.

Here they are standing in a line to protect each other from the blustery wind.  At intervals, they change places, and the one in back goes to the head of the line so they take turns being the one to block the wind.

As we drive, Biggi has a string of constant warnings about going onto the glacier.

“You’ll see the sign before we get there,” he cautions.  “It says impassable.”

He tells us how the jeep has been retrofitted to drive in extreme conditions, “but I’ll still have to stop and let the air out of the tires before we can drive on the glacier.”

“I always bring two cell phones, just in case.”  Just in case of what?

“The GPS will track our path in so we can get back out.”  And if it loses signal or breaks?  How do we get out then?

“My buddy is going up there, too, so we can go further in because there will be someone there in case something happens.”  Again, just in case?

We stop at the famous Gullfoss waterfall.  It was stunning, yes, but the wind was so cold that it was actually painful to walk down the path to photograph it.  Feel my pain.

Busloads of tourists are filing in to the restaurant and shop above the waterfall.  We join them.

“Fill up on soup before we go onto the glacier,” Biggi says.  What, because it will be our last meal?

There was a guy (loud American tourist) filling a plastic bag with handfuls of the rolls that went with the soup…he must have thought it was his last meal.

There was also a store.  I bought thick wool socks.  Just in case.

Biggi shows me on the map where we are going.

Langjökull means “long glacier.”  Its surface is nearly 400 square miles and the thickness of the ice is up to almost 2000 feet deep.

See the road called “Skálpanes” on the bottom right part of the map?  Now see how it ends before the glacier?  That’s what I’m saying.  Impassable.

Nonetheless, we head off to the great unknown.  Past the impassable sign.

Before we get to the glacier, we stop so Biggi can let the air out of the tires.

The gravel road turns to ice.

As we are driving on a road of slick ice, Biggi is adjusting the radio (to classic rock)…

…and talking on one of his cell phones.

I really wasn’t worried.  I was perfectly confident in his driving abilities.

The road changed from ice to snow…deep ruts that were like a roller coaster to drive over.

There’s Biggi’s friend, up ahead with a car load of tourists.  After this, he raced on ahead until he was out of sight.

In every direction was a stunning vista.

Sunrise or sunset?  It’s hard to be sure.

There is no road.  Only snow.

Eventually we stopped and got out of the jeep.  Wind gusts were up to 40 miles per hour, with temperatures well below zero, so, even with my wool socks, I couldn’t stay outside for long.  Holding the camera up in the wind was agonizing.

In spite of the cold, I had to photograph this magnificent landscape.  It was like nothing I’d ever seen before.

I was on a glacier.

Everything changed when we saw this up ahead.

We were at the top of an incline, and Biggi was about to turn around because it was too dangerous to go any further.

That was, until he saw the jeeps (one of them, the friend who had raced ahead) stuck in the snow down below.  I knew we couldn’t just leave them there, but, at the same time, was terrified that we would drive down and get stuck, too.

In the middle of a glacier.

Holding our breath, we drove deeper into the thick snow of the glacier.  It turned out that a reckless guide had gone too far and gotten stuck.  When Biggi’s friend had tried to pull him out, his jeep had gotten stuck, too.

That’s where we came in.

We had to pull out Biggi’s friend first, so a huge rope was tied to each bumper.

The passengers from both jeeps were standing, frozen, off to the side.  I went over to talk to them.

One of the guys who had been in the first jeep was the one who was hoarding the rolls in the restaurant!  (A premonition?)

It was touch and go, but Biggi managed to get everyone out.

Now for the really scary part…we had to get back up the hill.  I closed my eyes and crossed my fingers.

As he said he would have to, Biggi used the GPS to retrace our steps.

We finally made it out of the snow…and I’ve never been so happy to see an icy road.

I held my breath until we were back on the dirt road.

Biggi stopped to put the air back in the tires, and we set off to complete the Golden Circle.

With the sun setting (definitely setting now) beyond the magnificent glacier, I breathed a sigh of relief and thought to myself, “This is going to make a great story.”

For tours of the spectacles of Iceland: