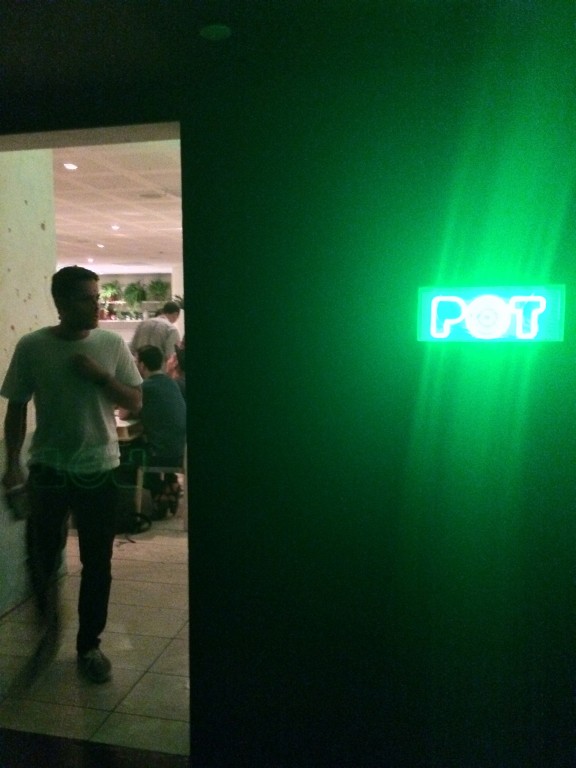 While I was working in Los Angeles, art directing Food Network show, “Daphne Dishes“, I got the opportunity to eat at some fabulous restaurants. POT, the latest venture from celebrated L.A. chef, Roy Choi, is a restaurant not to be missed.

Choi’s meteoric rise to fame is like a movie script.  Fired from a prominent restaurant, Choi became a food truck pioneer, serving up Korean BBQ and tacos.  By tweeting the changing locations of the truck he soon gained a massive following.

Named Food and Wine Magazine’s Best New Chef in 2010, he branched out into opening his own restaurants, and building his culinary empire.

(By coincidence, his life is not unlike the script for the 2014 movie “Chef“.  Choi was a producer on the film, and his friend, Jon Favreau, the film’s star and director, actually worked in Choi’s restaurant kitchens to learn the ropes for the part.)

POT (a nod to the traditional Korean hot pot, but with a green neon sign that calls to mind a marijuana dispensary) is Choi’s latest restaurant, located in the trendy boutique hotel, The Line, in Koreatown.

The restaurant is a lively (I might even say raucous) hipster joint with a hip hop soundtrack, serving up Choi’s own version of Korean fusion cuisine. Bowls, chopsticks and metal water cups are neatly placed in cubbyholes set into each of the long communal tables.

On top, there’s a plastic pitcher of iced barley tea and a roll of paper towels.  Floral print aprons are handed out, to tie around your neck like a bib.  An induction burner set into the center of each table keeps the family-style food warm.

The menu looks like a trendy newspaper, with its bold graphics, and of-the-moment slang.

POT is a restaurant that will tell you everything you want to know about the food scene in Los Angeles right now, and Roy Choi is the trailblazer.

[If you want to know more about Roy Choi, see his cookbook and memoir, L.A. Son.  He can also be seen on the CNN television show, Street Food.]