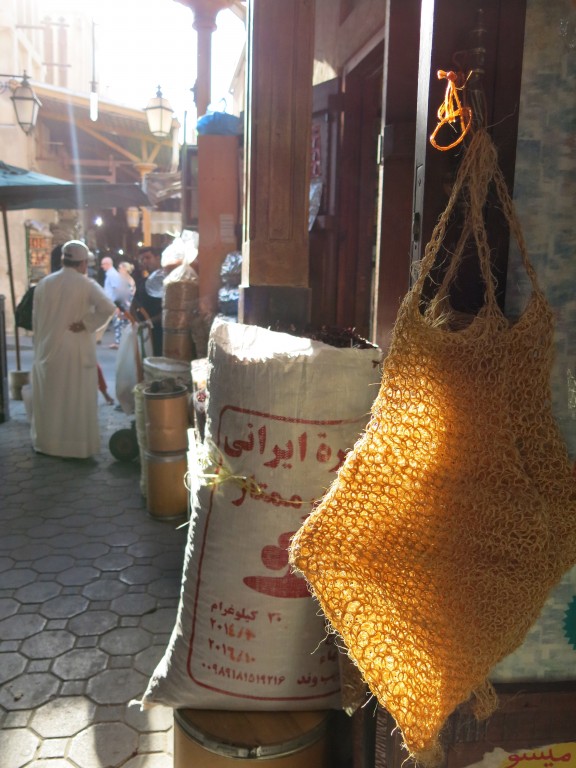 Remember the scene in the “Sex and the City 2” movie when SJP glides through the shadowy souk (wearing a full-length taffeta skirt, Dior t-shirt, and Manolos), amidst stalls that are draped with vibrant textiles and bursting with exotic merchandise?

Well, that was the picture I had in my mind when I left the glitz and glamour of new Dubai and headed for the souks of Old Dubai.

(I was not, however, wearing a taffeta skirt.)

The souk in Dubai is, indeed, a lot like the one in the movie. It’s a step back in time, where a neighborhood of dimly lit alleys are flanked by stalls selling a vast assortment of intriguing and colorful goods.

I went without a plan, except to explore.

I first wandered through the textile souk, where shop after shop sold identical poufs and pillows, machine-embroidered tunics, “Fly Emirates” and “I heart Dubai” t-shirts, Aladdin’s lanterns, cheap sunglasses, and the like.  Souvenir land.

Unless you’re in the market for a cheap pashmina, you just keep your head down and shoot past the parade of men who are persistently pushing the woven shawls, waving them in front of each passerby as if that’s going to make someone want to buy it.

I was not discouraged, because I knew the best was yet to come.  I headed towards the water.

Why the water, you might ask?  Because it’s where you can hop on an abra to get to the souks in Deira, on the other side of the Dubai creek.  That’s where the more authentic experience would be.

(An abra is a wooden boat that is like a “water bus,” to transport people from one side of the creek to the other.  It costs 1 dirham, the equivalent of about a US quarter.)

Not only is it an efficient way to travel, there’s great photo ops of the city from the water.

Hopping off the abra on the other side of the creek, I followed my nose to the spice souk.

Along each side of an open alleyway were bags bursting with seeds and herbs and chilis and nuts, lined up in front of tiny shops whose doors were hung with clear plastic flaps.

Proprietors stood in the alley outside their shops to encourage shoppers to come inside.

“What are you looking for? Come, I will show you…”

I avoided them until I became intrigued by the patterned henna stencils on the door of one shop, and went inside to investigate.  (Who knew they had stencils?)

The air was scented with the fragrance of the open bins of spices – coriander, cumin, curry, and “cinnamoon.”

In another section were bins of seeds, labeled only with “red”, “black”, and “slim,” and various sizes of gnarly turmeric roots.

Bags of nuts and technicolor candies were stacked to the ceiling.

Above the spice bins on one wall were boxes of henna paste.  Love those graphics.

Check out the the faceless hair styles on the boxes of hair dye.  (And what can the snake on the pink box possibly mean?)

As I stepped out back into the alley, the sun was skimming across the bags of spices, illuminating them perfectly for me to photograph.

I wandered aimlessly down one alley and up another, without any definite idea of where I was going.

I used to be completely map dependent, but I’ve changed my tune.  I find that I have a much better time if I meander than if I’m studying a map to figure out where I am and which way I’m going.  I know I’ll find my way back eventually, so why not just enjoy the moment?

Each alley is covered with a wooden roof, and Arabian-style brass lanterns hang on pillars on either side.  Flapping above some lanes were strings of United Arab Emirates flags.

I suddenly found myself in the “housewares” section, and came upon towers and towers of stainless steel cooking pots.  You might be thinking, “big deal, cooking pots,” but I’m telling you, they went on for a whole block.  That’s a lot of cooking pots.  Who’s buying all of these cooking pots?

The market opened up to this interesting vignette, and suddenly I was in a land of textiles.

This guy asked me to take his picture, so I naturally obliged.  (Are you kidding?  You don’t have to ask!)

I turned to see flashes of red and black polka dots in a streak of sunshine, as two men shook out pieces of fabric before folding them up.

Camera poised, I snapped until I got the perfect shot.  I love this pic.

A group of women in black abayas looked like silhouettes against the garish colors of the fabric stacked on shelves in this shop.

Then I turned the corner and there it was.  The mecca of all things bright and shiny.

Dodging the hawkers proffering fake Rolex watches, I gazed into the dazzling windows of gold.

There were amulets and anklets, bangles and bracelets, brooches and beads, chokers and circlets and cuffs.  Rings for every occasion (engagement, wedding, signet, and cocktail) were tucked into indented rows of velvet.  Multitudes of earrings – hoops and studs and chandeliers and drops – lay in tidy pairs.

Some embellished with dazzling gemstones, the baubles and bling sparkled and shimmered.

I tucked my camera into my bag and started to shop.  I mean, who can resist?  I went into shop after shop, looking for something that, A. I could afford, and, B. was not for tourists.

In each shop, I asked the proprietors, “What do the local women wear?” They clearly did not understand, because they all led me to pendants in shapes of magic genie lamps and camels.

Frustrated, I came up with a new strategy.  I would go only into shops where local women, easy to identify in their black abayas, were shopping.

In one, a group of women were being served tiny cups of coffee, as they were seated in front of a glass case, examining sparkly treasures that had been laid out on velvet trays.  (I could not photograph them.  I asked.)

After going in and out of numerous shops, jet lag was rolling in, and my eyes were glazing over, but I was not leaving this souk without owning something gold.

I looked into a tiny shop called Sona Jewellers, where a local woman was in discussion with the men behind the counter.  She was wearing a fashionable black and blue abaya, with elaborate blue embroidery.

Stepping inside, I stood next to her, and asked to look at the chains that were draped on hooks in a glass case behind the counter.  She turned, and we struck up an instant rapport.  A boy named Ashish brought out necklaces of assorted lengths, weights of gold, types of links, and karats of 22 and 24.

We both liked the 22 karat better than 24, which is a very bright yellow. (I just have to say, it’s only time I’ve ever preferred the less expensive version of something.)

She instructed Ashish to show me necklaces of varying links and weights and lengths, pointing to this one and that one in the cases behind him.  I asked her opinion on each one as I tried them on.

It was just like shopping with a girlfriend.  We laughed and talked, and she told me about the type of jewelry she wore.  I learned that she was there to get an ankle bracelet fixed, and that she buys most of her jewelry at this shop.  No wonder they were so accommodating.

Eventually, we narrowed the choices down to two, and then, after trying on one and then the other several times, I chose my necklace.  It is a 16 inch chain, with unique links that alternate between yellow and white gold, almost giving the impression of diamonds.

Then the bargaining began.  My friend had turned to finish her transaction, so I began to negotiate the price.  When I was given a final price, I consulted her, and she came to my aid.  This woman knew her gold. She rattled off weights, and costs per weight, amiably defending her case for a discount.  After much friendly discussion, I was given a considerably lower price than the original offer.

My necklace was curled onto a square of cotton in a purple plastic box, and then tucked into a red velvet zippered case with the name of the establishment printed on it in gold.

While I was completing my transaction, my friend and I chatted about our lives.  I told her I was a TV art director, and she told me that she is a stay-at-home mother with three small kids.  Then I asked if I could take her picture.

She burst out laughing.

We laughed, and I snapped the photograph anyway.

The memorable moment is now frozen in time, and it will forever be one of my favorite photographs.  I love the photograph itself – the mirth in the eyes of my new friend, the two men chuckling in the background, the boy peeking out from behind to see what was going on.

I also love what the photo represents – one of those unforgettable, once-in-a-lifetime travel experiences where I have had the great fortune of truly immersing myself in a new culture through human connection.