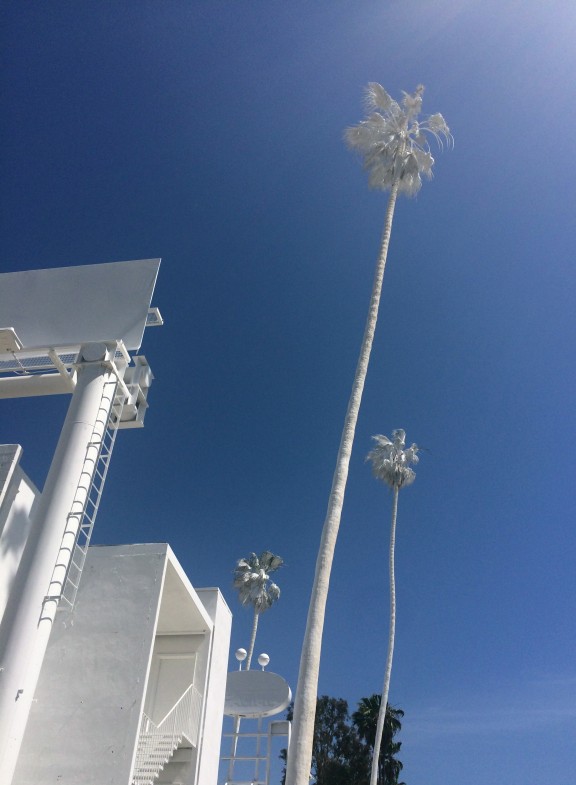 I was going about my business, driving down Sunset Boulevard in the Silver Lake neighborhood of Los Angeles yesterday, when I happened upon a stunning sight.  Milky white palm trees towered above a ghostly whitewashed structure.  Upon investigation, I learned that French artist, Vincent Lamouroux, had transformed a derelict motel and its surroundings with a blanket of white lime.

The Sunset Pacific Motel a.k.a. the Bates Motel (nicknamed both for its location at Sunset Boulevard and Bates Avenue, and for it’s crime-filled history and creepy similarity to the motel in the Hitchcock film, “Psycho”) had been vacant for more than a decade.  With windows covered with rotting plywood, and concrete walls scrawled with graffiti, it was an eyesore.

The motel was recently slated to be demolished, to make room for apartment buildings…but not before one last incarnation.  Artist, Lamouroux approached the property owner and Los Angeles Mayor Eric Garcetti, with his vision, and got their approval and support for the project.

“An abandoned space is transfigured and enhanced, perhaps eluding its last glory. “Projection” induces both an appearance and a disappearance; it revisits our existing landscape with new eyes and envisions the building’s surfaces as screens for the projection of our desires.”

The mood on the street yesterday was one of both awe and enthusiasm.  A crowd gathered, and then multiplied, with cameras on tripods, and iPhones raised in the air. One woman told me she had heard about it on television and wanted to see it in person. A man risked life and limb to get the perfect photograph from the middle of Sunset Boulevard.

Craning necks to gaze up at the palm trees, and peering through the chain link fence to see the whitewashed courtyard, one and all were enthralled.

An ugly duckling had been turned into a swan.  Is it a metaphor for the changing landscape of Los Angeles, or, simply, a masterful work of art?

“Projection” is produced by Please Do Not Enter and supported by Creative Migration, FLAX, Lycée international de Los Angeles, and Institut Français.