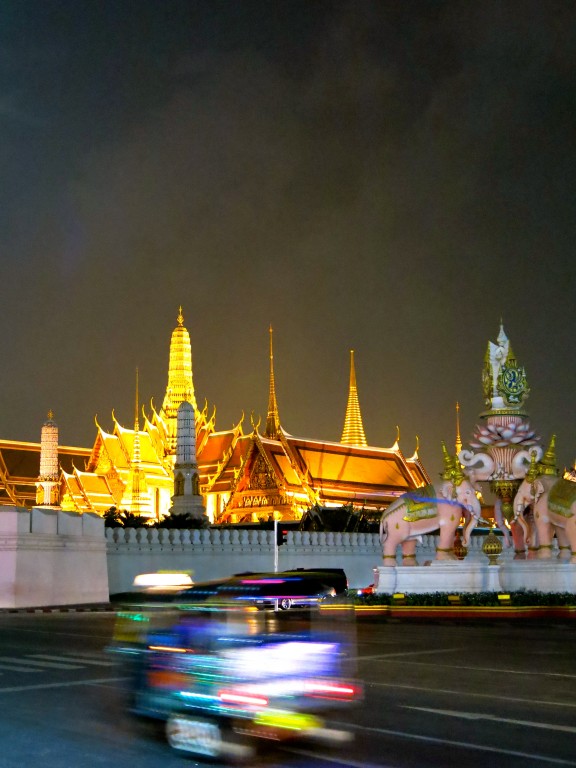 While I was in Bangkok, I went on a nighttime tuk tuk tour with a guide named Jeeb, and three people by the names of Baby, Junior, and Buddy.  The names were not the only peculiar aspect of the evening.

Jeeb was an energetic and gregarious young woman with a mission.  It was her job to guide the three of us safely, on a five hour tour, all over the mad city of Bangkok.

Baby and Junior were a friendly, slight of stature, retired Filipino couple from California.  (Baby being the wife, Junior, the husband…just in case you hadn’t figured that out.) They are exactly the kind of people you want with you on a tour because, smiles on their faces, they were game for everything.

Buddy, a large man in his thirties, lived in Bangkok. This was the second time in as many weeks that he had taken the tour.

This was both a mystery and a distraction.  I mean, really. Why?

We split up into two tuk tuks, with Baby, Junior, and Jeeb in one and Buddy and I in the other, and went hurtling through the streets, hanging on for dear life.

[About the tuk-tuk: A tuk tuk is a three-wheeled, open-sided vehicle also known as an auto rickshaw. The name is derived from the sound it makes.]

I asked Buddy a few get-to-know-you questions.  Work?  Some kind of business.  Where from?  Singapore.  How long in Bangkok?  Five years.

He had lived in Bangkok for five years and he’s going on a tour for tourists?

I wondered if he was thinking outside the box and using the tour as a dating service, but that seemed like an expensive and time-consuming gamble to meet a girl.

Our first stop was the Klong San night market, where we sampled the street food, something Thailand is famous for.

Jeeb had some favorites, so we followed her lead.  This is called “khanom bueng,” and it’s a rice flour “taco,” spread with something akin to marshmallow fluff, and a choice of green tea, shrimp, or egg topping.

My personal favorite was khanom thuay, a steamed coconut custard that looked like big raviolis.

Of course Buddy had already tasted everything the last time he took the tour, and thought it would be helpful to give us his culinary opinion.  NOT.  It was akin to when someone tells you the end of a movie that you haven’t seen yet.

He was starting to annoy me.

This is Thai take-out food.  Dinner in a baggie.  A lot of people don’t cook at home because they can buy a freshly made dinner (albeit in a plastic bag) cheaper than it would cost to make it.

Hopping back into our respective tuk tuks, we dashed through the streets to see temples, a couple of important monuments, and a giant swing that’s not really a swing.

[About the giant swing: Set at the entrance of one of the oldest temples in Bangkok, young men would ride the swing in a ceremony to celebrate the annual rice harvest.  Swinging about eighty feet above the ground, they would try to grab a bag of silver coins with their teeth.  The swing part of the swing was removed in 1932…after a string of injuries and deaths.]

Buddy had already seen it all, so he seemed pretty bored. (No kidding.)

A real high point for me was going to Wat Pho (that’s the temple where the reclining Buddha is), which was absolutely stunning at night, and, oh joy, there was nary a tourist in sight.

Buddy took a few pictures with a big fancy camera.  I had a moment where I concluded that he was doing the repeat tour to take photographs, but he really didn’t seem that into it.

Next we zipped over to a produce market and wandered among the baskets and bundles bursting with fresh fruit and vegetables.

A little girl slept alongside her mother’s stall.

This is jack fruit, but these are small ones.  They can grow as large as three feet long, reaching eighty pounds in weight – the biggest tree fruit in the world.

I really felt like a tourist there.  These people were working all night long and I wasn’t even there to buy anything.  I mean, what was I going to do with a cabbage?

I didn’t even take very many pictures, which is rare for me.  Buddy didn’t either, and, by the way, he was looking a little crabby at this point which made me think to myself, “Well that’s what you get for taking the same tour twice.”

Across the road was the dazzling Pak Khlong Talad flower market, which is open twenty-four hours a day.

Delicate orchids in every color of the rainbow were heaped onto tables.

Plastic bags held fluffy marigold blossoms.  These would be made into wreaths and garlands for Buddha.

Clusters of vibrant roses, wrapped tightly in newspaper, stood side by side like an assembly of soldiers.

Buddy bought a bunch of red ones. FOR HIS WIFE.

This was a shocking development.

There’s a wife he has left at home to go on this tour twice.  Again I wondered if he was trying to pick up girls, but, again, it seemed like a lot of trouble for that purpose.

Then we got caught up in a flower market log jam to beat all log jams.  A mass of humanity packed together like sardines moved as a single unit through a narrow path that wound through the flower stalls.  I think Jeeb was worried that we’d never make it out of there.  She led the way, while Baby held onto Junior, I followed close behind, and Buddy brought up the rear, somewhere back in the throngs.

Eventually we squeezed out the other end, but Jeeb, who was on a strict schedule, was worried about the time.  Because, you see, dinner was next on the agenda and we had a reservation at a very exclusive restaurant.

The tuk tuks were lying in wait, ready to hightail it to the restaurant.  I jumped in with Baby and Junior.

I needed a break from the Buddy conundrum.

As it happened, the talk in the tuk tuk was all about Buddy.  I didn’t mind though, because it was gratifying to learn that Baby and Junior were just as curious about his presence on the tour as I was.  Unfortunately, not even putting our heads together succeeded in coming up with a viable theory.

There’s nothing I like better than solving a mystery and this was getting exasperating.

We pulled up to Thipsamai, which is, according to Jeeb, the “best pad Thai restaurant in Bangkok.”

[What is Pad Thai?  It’s a stir-fried rice noodle dish, tossed with vegetables, bean sprouts, peanuts, eggs, a protein of either shrimp, chicken, or tofu, and seasoned with the ubiquitous Thai flavors of salty, sour, sweet, and a little spicy.]

On the sidewalk in front of the restaurant, giant woks set atop buckets of fire-y charcoal on stands, were perched next to tables laden with dripping pots and stacks of plates.

Beaten egg was flung into a wok so it coated the sides in a thin layer.  After a generous heap of the Pad Thai noodle concoction was tossed into the “egg skin,” the whole thing was flipped over and tossed onto a plate, forming a Pad Thai parcel.

The main part of the kitchen was set up in the front of the restaurant and open to the street.

Worker bees moving in fast motion made up plates of noodles and passed them to the wok workers to wrap them in their egg skin.

Take out portions were wrapped in waxed paper and secured with a rubber band.

Now let me tell you a little something about the history of Pad Thai in Bangkok.

Here’s what: The recipe came from the government.

In the late 1930s, Prime Minister Plaek Phibunsongkhram figured out that a struggling economy could be boosted if Thailand exported rice instead of ate it.  A recipe was devised that not only replaced rice with noodles, but was nutritious and inexpensive.  On the wave of “Go Thailand” promotion, Pad Thai became known as the “national dish” of the country.  The government distributed the recipe, and encouraged vendors to sell the dish on the streets.

As for restaurant, Thipsamai, after World War II they became notorious for serving up “the best Pad Thai in Bangkok.” The back of their printed menu supplies these two reasons for their success:

Seems like a good recipe for success (no pun intended), and the queues down the block are the proof in the pudding (last one, sorry.)

As part of the tour we had exclusive access, so we felt very important as we bypassed the hungry patrons and glided through the crowded restaurant to our reserved table.

Baby and Junior and I sat at one end, with Buddy and Jeeb on the other.  Buddy was far more animated than he had been on the whole tour.  We were served another house specialty, fresh-squeezed bottled orange juice with copious amounts of pulp.

Yep, turned out he had three kids at home with the wife.  The plot thickened.

Jeeb ordered the house specialty, “Superb Pad Thai,” for everyone.

In the center of each table was an aluminum baking pan filled with jars of exotic condiments, and a plate of bean sprouts, scallions, and lime wedges, to customize the flavor of the Pad Thai according to individual taste.

I noticed that the bean sprout plates had been efficiently made up ahead of time, with plastic bag versions for take-out.

The place was packed, and families had pushed tables together to accommodate several generations.

A jovial manager dashed around clearing plates and greeting customers.

Our Superb Pad Thai was delivered and I broke open the egg pouch to get to the delectable noodles.  It was sweet and spicy deliciousness.

At our end of the table, Baby and Junior were telling me about their recent visit to the Philippines, when we overheard Jeeb ordering another plate of Pad Thai for Buddy.  I looked over to see that he had finished his first plate of noodles in record time, and was asking for another.

Buddy looked like a smiling Buddha, contented and triumphant.

Jeeb laughingly told us that he had done the same thing on the first tour.

I looked at Baby and Junior.  They looked at Buddy and then back at me.

We were all thinking, “By jove, I think we’ve got it!”

I’ve met foodies, but this is extreme.  Could Buddy have really left his wife and three children at home to go on a five hour tour for a second time, just to get into Thipsami for the Pad Thai?

Why, yes, I believe he did.

(If you’ve got any other theories, I’d be happy to hear them.)

Buddy finished his second plate of Pad Thai and our carriages (okay, tuk tuks) awaited to whisk us home.

The tour had been an amazing way to see Bangkok, although I don’t think I’d do it a second time. Not even for the Pad Thai.  And especially not if I lived there and had a spouse and children waiting at home.

But that’s just me.