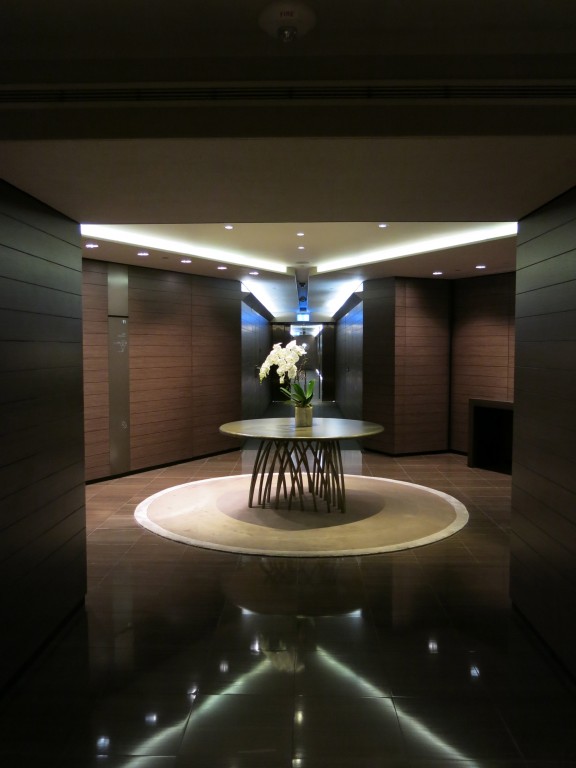 Oh yes I did. I used my travel blogger status to score a press rate in the crème de la crème of hotels in Dubai. The one and only hotel that resides in the world’s highest tower, the Burj Khalifa. The height of luxury from one of the world’s most celebrated fashion designers.

Oh yeah, I stayed at the Armani Hotel.

The experience started with the shiny black Bentley waiting for me at the airport. As my jet-lagged bones sank into the sumptuous buttery leather, the driver unfurled a cool towel into my hand and asked if I’d like still or sparkling water.

I could get used to this.

When we pulled up to the hotel, a relay of porters, dressed in Armani-designed black uniforms, ushered me out of the car. One opened the car door, another plucked the luggage out of my hands, and another led me through massive glass doors, held open by yet another, into the lofty atrium lobby.

Sweeping circular sofas faced each other on polished eramosa marble floors, everything in Armani’s signature palette of shades of neutral. (I was going to say “shades of grey” but thought better of it.)

The dream team of porters handed me off to a tall, dark, gorgeous model (dressed in sleek black Armani) who looked like she had just stepped off the runways at Milan Fashion Week. She greeted me, checked her clipboard, and twirled to introduce me to her male counterpart.

A GQ model, dressed in fitted black Armani suit with a chic black Nehru-collared shirt, whisked me into the elevator in a blur. As we ascended to the eleventh floor of the Burj Khalifa, he told me that his name was Eduard, and he would be my Lifestyle Manager (never thought I’d use that in a sentence) during my stay. He informed me that check-in would occur in my room, because Mr. Armani believes in a personal approach to hospitality. There would be no waiting in lines here.

Oooh, I like having a lifestyle manager. Here he is.

Let me just say, there is nothing mass market or conventional about the Armani hotel experience.

This is couture hospitality.

The hotel consists of 160 rooms, 144 one and two bedroom residences, eight restaurants (including Indian, Japanese, and Italian cuisine), and a 12,000 square foot spa with a pool and fitness room. Giorgio Armani’s elegant artistry is evident everywhere, in the sophisticated muted colors, graceful lines, rich textiles, and timeless furnishings.

The entire enterprise was overseen by Mr. Armani himself, down to the smallest of design details.

Turns out I was staying in a one-bedroom residence.

(I discovered that you can actually buy one for around $2 million. Just in case you’re interested.)

A dramatically lit corridor of African zebrawood panels led to my door. Where there was no door knob. (Truly, a door knob would spoil the whole look.)

The room is accessed by a touch of the key card to a small panel with a space age icon, and the door magically opens. (If you’re wondering, to indicate “do not disturb” there’s a red light that is activated by a button inside the door. No door knob for a cardboard tag.)

A beautifully appointed vestibule opens into the residence, which I’m pretty sure is bigger than my apartment at home.

A covered tray of chocolates, each one monogrammed with the Armani “A”, has been placed in the center of the dining table.

As you come out of the vestibule, there’s a mini bar/snack area (all complimentary, of course) on one side of the room, and on the other side, an ingeniously compact kitchen that is hidden behind a clever door that opens and then tucks back into the wall.

(Truth be told, I didn’t discover the kitchen until the night before I left…but good to know.)

An upholstered screen of Armani damask separates the dining area from the living room.

Everything is sinuous and elegant. A curvaceous wall encloses the living room area, where Armani/Casa furnishings are arranged beside floor to ceiling windows. Love the shape of those lampshades.

Another curved wall covered in leather leads into the bedroom, where a pair of velvet slippers were set out on a mat next to a king-sized bed dressed with the finest linens.

The enormous bathroom, walls and floors clad with polished striated marble, was like its own separate apartment.

A super-size bathtub filled one wall of the spacious room, and a room-sized shower sported an invisible high-pressure rain spray that came magically out of the ceiling.

Fluffy white towels were strategically placed anywhere you might need them.

Perched on a black plexiglass pedestal was a single, copper-colored soap shaped like a stone that Mr. Armani had reportedly found on a beach in Italy.

Everything in the room is controlled by an iPad. There’s even a door camera on it, so you can see who is knocking without having to traipse all the way out to the vestibule and look through a pinhole.

(Let’s face it, pinholes, like door knobs, would ruin the whole aesthetic of the corridor.)

I’m a stationery fanatic, so I love to check out what’s on offer in the hotels I stay in. I was not disappointed. Tucked into a narrow shelf below the television, there it was.

Writing utensils emblazoned with branding. Paper and envelopes, quality outstanding. Silver-grey notecards, all tied up with string. These are a few of my favorite things.

(A few of these bits may have found their way into my suitcase. But, really, how can they expect one to resist such fineries?)

In addition to my discounted room in the Armani residence, I was given a complimentary spa treatment. I don’t typically frequent hotel spas – in fact, I hardly ever even set foot in them. (Frankly, I just don’t want to take the time.)

However, was I going to turn down a complimentary massage in the Armani spa? I don’t think so.

But first I had to find it.

Here’s the thing. If you stand in the lobby looking confused for even a nanosecond, someone, stylishly dressed in black Armani, will magically appear and ask you what you are looking for.

The spa was every bit as sublime as you might expect. I was seated in an upholstered chair, and a perfectly styled tray of juice and dried fruit was placed in front of me. In hushed tones, an attendant asked me wellness-themed questions from which the therapist would design a personalized treatment especially for me.

In the locker room, a wall of shelves were meticulously filled with thick white towels embroidered with the hotel’s namesake.

A lovely young woman in a crisp ecru uniform led me into a small room with walls draped in mushroom-colored linen. I laid down on a plush, warm bed, and closed my eyes to the ambient sounds of meditative new age music.

And then I immediately fell sound asleep.

Jet lag had clearly caught up with me, and I was kind of disappointed that I wasn’t able to consciously enjoy the massage.

Nevertheless, I’m sure it was great. It’s the Armani experience, after all.

Let’s jump from massage therapy to retail therapy…so I can tell you about the Armani hotel version of a gift shop. I love gift shops in high-end hotels, because they usually feature beautifully curated products, edited from exclusive brands that I haven’t seen before.

Not surprisingly, the Armani hotel didn’t have a conventional gift shop. Along the central corridor that led into the hotel was a galleria of glass cases, each with one or two exceptional items in it.

The merchandise, displayed like museum artifacts, is a collection of haute-couture fashion accessories from the Giorgio Armani Privé collection – watches, handbags, jewelry, and perfumes, previously only available to the elite, upon invitation only.

If something is in a locked glass case, I can pretty much guarantee I can’t afford it, so I window-shopped.)

On one side was Armani/Fiori, which, in their own words, “features fresh flower arrangements and exclusively designed vases by Giorgio Armani. The vases’ quintessential designs follow the fluid shapes of the flowers themselves. Delight in the signature flower: a simple yet elegant white rose.”

On the other, Armani/Dolci, “offering a sweet selection of biscuits and chocolates, petits fours, biscotti and more, all bearing the unmistakable Armani signature.”

Speaking of dolci, like a camel finds water, instinct led me into the Armani Lounge one afternoon, just in time for afternoon tea. A polished silver samovar was the centerpiece of the beautifully styled spread of pastries and tea accoutrements.

I chose a lemon meringue tart garnished with gold leaf and they set me up with a tea service that came with a pistachio madeleine.

I seriously coveted the silverware, handles stamped with a pebbly pattern.

On my first night, I sat on the terrace of the Armani’s Japanese restaurant Hashi, enjoying the Dubai fountain extravaganza. At night, illuminated by over six-thousand lights, the fountain shoots water 500 feet high, in a choreographed pattern that dances to a dramatic musical soundtrack.

The tag line for the Armani Hotel is “A world of sophisticated beauty.”

I’m just going to say it, I really, really like this world.