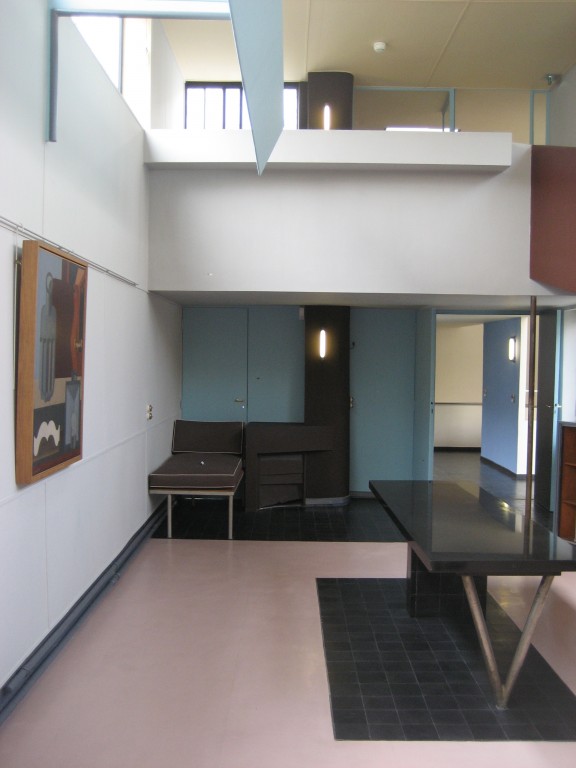 A striking white modernist structure is tucked into the Square du Docteur Blanche, a stark contrast to the traditional stone chimney-topped townhouses.  Built in the early 1920’s in the residential XVIth district in Paris, Maison La Roche is a glimpse into the innovative world of designer Le Corbusier.

Charles Edouard Jeanneret, known as Le Corbusier (a brilliant bit of personal branding) was a Swiss-French painter, architect, industrial designer, and writer who played a decisive role in the development of modern architecture.

Le Corbusier’s architectural philosophy was elegant, simple and functional.  He wanted houses to be as useful as machines.  Maison Roche is a perfect example of his principles at work:

1.  Roof garden on top of the house, the consequence of a flat roof.
2.  Columns that raise the house above the ground.
3.  A “free” plan, unencumbered by structural partitions.
4.  A similarly “free” facade, free of decoration.
5.  Strip (continuous, horizontal) windows, which provide maximum illumination to the house.

Much of the furniture is gone (no sign of the famous LC 4 Chaise Longue), but there’s a great leather club chair with velvet seat cushions on a landing, and a dining room table surrounded by four Thonet chairs.

His modernist-style still life paintings complement the colors of the rooms.  I was particularly fascinated with his paint swatch tests on the walls in several rooms.  Studying them made me feel a little like I was seeing his thought process.  (You can purchase a small paint chip fan with all of the final colors.)

The tour is a self-guided one, which gives you the opportunity to spend as much time in each room as you want.  Don’t miss the little details like the door hardware, the glass surfaced window sills, the very purist light fixtures in the dining room, and the way light and shadow play a leading role in the design.

After you’ve been inspired by Le Corbusier, spend some time wandering the rest of the charming neighborhood.  It’s a designer’s perfect day.