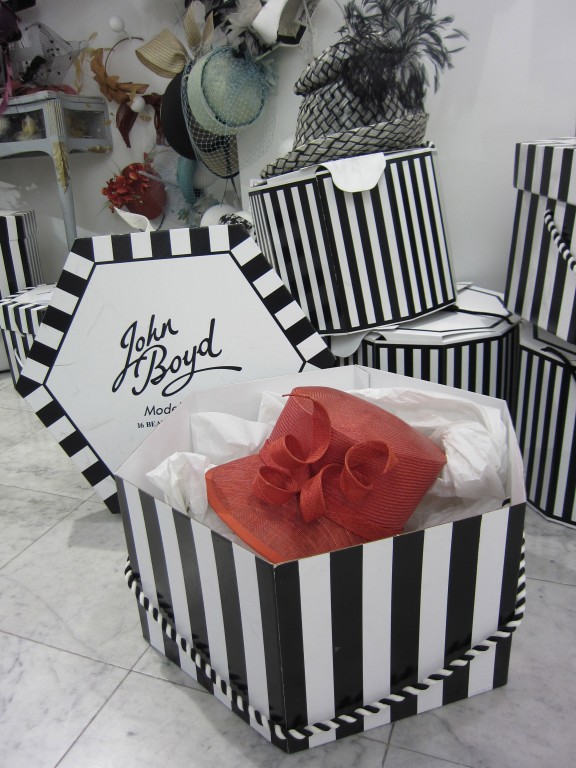 The most important accessory for a Royal Wedding is, of course, the hat.  People are even taking bets on what color the Queen’s hat will be tomorrow.  John Boyd has been making hats for London society, including the Royals, for 65 years.  I looked in on the shop today to take a peek behind the scenes.

The workroom/shop is in the bottom of a building in the fashionable Beauchamp Place in Knightsbridge.

The shop is a wonderland of hats.  The shapes, the colors, the feathers, the flowers…each and every hat exudes charm and personality, ranging from the demure to the flamboyant.

Beyond the shop is the workroom where the magic happens.  There are stacks of wooden molds, boxes of trimmings, bolts of fabric, and hats in various stages of construction.  It takes about three weeks to make a couture hat, and the average price is around £425, or $700.

I loved Mr. Boyd’s whimsical sketches.  It was his sketches that led him to pursue the life of a milliner.  A colleague saw them when he was working in a laboratory for an Edinburgh rubber company in the 1940’s.  He told Boyd that he was wasting his time there, and suggested he go to London to see a friend of his who was a milliner.  He did, and the rest is history.  His work is now in the archives of the Victoria and Albert Museum.

On the wall is a framed photo of Mr. Boyd’s most famous client, Princess Diana.  There’s a scrapbook of photos of Diana wearing his hats.

Sarah and Raina are milliners that have been trained by, and work under the guidance of, Mr. Boyd.  They are breathing a sigh of relief today, as the hats made for wedding guests have all been delivered.  The wedding hats are finished, but there’s always new ones to be made…Sarah is adding feathers to a blue straw hat, and Raina has just finished dying silk flowers to match customers’ outfit.  A fabric swatch is provided to ensure that the color of the hat is an exact match.

At the top of the building is a tiny glass-walled room where the dyeing process is done.  There are oil-based French dyes for the flowers, water-based dyes for the straw and silk veiling, and spray dyes used to add contrast to the edges of flower petals and leaves.  Raina is painting the leaves for the fuschia hat she’s working on.

Being a typical American, and unaccustomed to wearing hats, I hadn’t really understood the significance of them.  After spending time in John Boyd, I can see how the hat is truly a reflection of one’s personality.  Naturally, I had to try a few of them on.  I decided that, if I was to wear a hat, this one, called a fascinator, would suit me.

Sarah and Raina will be watching tomorrow to see their hats arrive at the wedding.  Keep an eye out for them…they’ll be the ones that are the most exquisite.

Tags: England, London, Royal Wedding
admin
https://justonesuitcase.com
There are 4 comments for this article