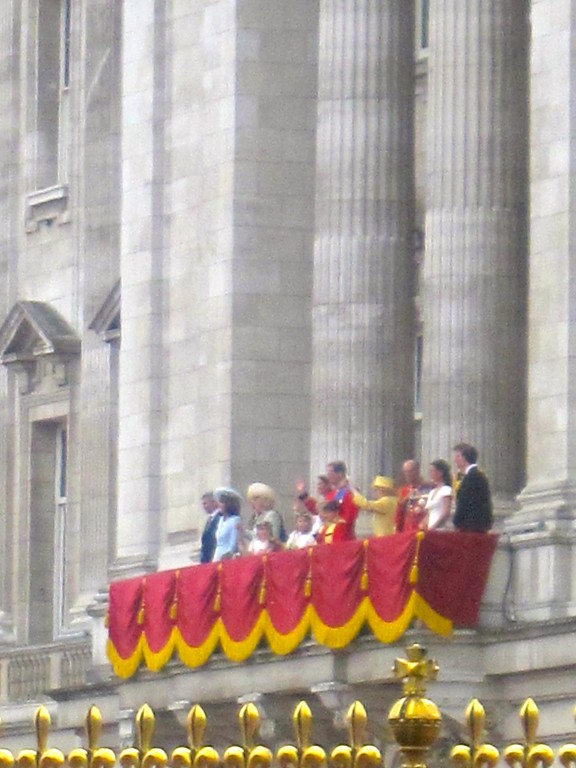 The atmosphere in London is positively jubilant.  People from all over the world have gathered to watch, and be part of, the wedding of Prince William and Kate Middleton.  Some have camped out for days, and, even so, the mood is simply one of great joy.  Unusually, I didn’t have a plan.  I set out at 6 a.m. for the Tube, with camera in hand, and made an impulsive decision to get out at Westminster Abbey.

Policeman guarded the Abbey, and it was quite calm on that side of the street.  It was across the street where the action was at this time of the morning.

I saw several of the people that I’d seen camping out two days ago, including the American woman who had been there with only a chair.

You may ask why it is that all those people are on the other side of a fence, waving to me, and I am photographing them from outside the fence…the answer is, I just walked past the barriers and took pictures for as long as I could until a policeman looked at me and said with a smile, “You know you’re not supposed to be here, right?”  I laughed and confessed that, yes I did know, but I figured I’d stay until someone told me to leave.  We bid each other a good day, and I followed orders.

With Big Ben behind them, onlookers took their places for the best viewing of the procession that would leave the Abbey in six hours.  Six hours. I’m just saying.

This guy was literally laying on the sidewalk in the midst of the crowd.

I couldn’t get a smile out of this kid, whose teeth were chattering, but maybe he’ll feel better when he eats the hot porridge his mum is cooking on a portable propane burner.

Here’s a small selection of some of the outfits.

6:45 a.m.  Time to move on.  On to Trafalgar Square, one of the locations where people can watch the ceremony on a large screen.  Bleachers were set up in front of the National Gallery, facing Lord Nelson’s column and the screen.

There were many enterprising entrepreneurs along the route selling food, flags of all styles, pins, hats, scarves, magnets…you get the picture.

By 7 a.m., I was at the Mall, policemen lined each side of the road.  Behind the fences, people were already seven deep.  I noticed a lot of discussion among the policemen…you can only imagine the crowd control issues.  See crowds below.

Here’s some of the happy faces waiting along the way.

These girls had t-shirts that said, “It could have been me.”

There were a lot of Burger King crowns. Hundreds actually.  Funny.

Someone was giving out these periscopes, and they came in handy for people at the back.  I wonder if I could have taken photos with one.

The Royal Guards marching bands kept people entertained while they waited.  At this point, people had been there so long that they cheered and waved their flags when the parks maintenance truck went by.

I passed the entrance to Clarence House, where Princes William and Harry, Prince Charles and Camilla, and other significant guests were staying.  I spotted an open space just beyond the gate at 8:30, and decided to stake a claim, with the hopes that I’d get to see them leave for the wedding.

The first bit of action at the gate were the guards.

The less important of the important Clarence House guests were transported to the wedding in these buses.

This is the point where I have to tell you that I SAW Princes William and Harry leave Clarence House in their car, followed by Prince Charles and Camilla.  Then I saw the cars coming from Buckingham Palace with the other Royals, Prince Andrew and his daughters, Prince Edward and Sophie, Princess Anne and her husband, Mark Phillips.  I also saw the car carrying the Queen and Prince Phillip (wearing yellow as the bookkeepers predicted), and, finally, the car with Kate and her father.

I saw them all.  Where are the photographs, you might ask?  Well, first of all, you must remember that I’m not a professional photographer. Secondly, and more importantly, each and every time I snapped a photo, there was a policeman, a hand, something, that uncannily appeared directly in front of the person I was taking the picture of.  So, wait for it, here’s the photographs…watch and weep.

Prince Charles’ arm, with Camilla in the car

The Queen, I think, but could be Prince Andrew

Kate and her dad…really she’s in there.  You can see her veil behind the waving hand

I now had two choices: get a place on the procession route, or go to Green Park to watch the ceremony on the large screen.  I chose the ceremony, thinking I could come back afterwards and squeeze in somewhere.

There were thousands of people on the lawn in front of the screen.  When Will and Kate said “I will,” everyone cheered and clapped.  The crowd sang the hymns along with the congregation, and stood up to sing with “God Save the Queen,” followed by a joyous ovation, union jacks waving.  It was fabulous.

I was so convinced that I’d be able to get back to the procession route to see the happy couple return to Buckingham Palace, that I couldn’t believe it when the policeman at the gate insisted the answer was no.  No.

I began to look for a way out and around (yeah, right), when I realized I had found a spot on the lawn where I could just see the balcony, draped in red, through the trees.  I looked around and saw a handful of people relaxing or playing ball, but not noticing the surprising view.

Over the course of the next hour, people who had also tried, and failed, to get round to the Palace, began to discover my view.  By 1:00 there was a clump of hundreds of people in the narrow strip of lawn where you could get a glimpse of that balcony.

All at once, William and Kate, and the rest of the Royal family, came out onto the balcony, and, miraculously, the gates were opened.  Everyone took off running towards Buckingham Palace.

I thought about it for a moment, and then, yes, I ran.  I got to the Palace in time to see the Royal family waving from the balcony.  Dust was flying, the RAF jets roared overhead, and it was complete mayhem.  It was a thrill to be there.

The wedding is over, and England has a new Princess.  For one shining moment, the world has something to smile about.

Congratulations, Will and Kate!

Tags: England, London, Royal Wedding
admin
https://justonesuitcase.com
There are 8 comments for this article