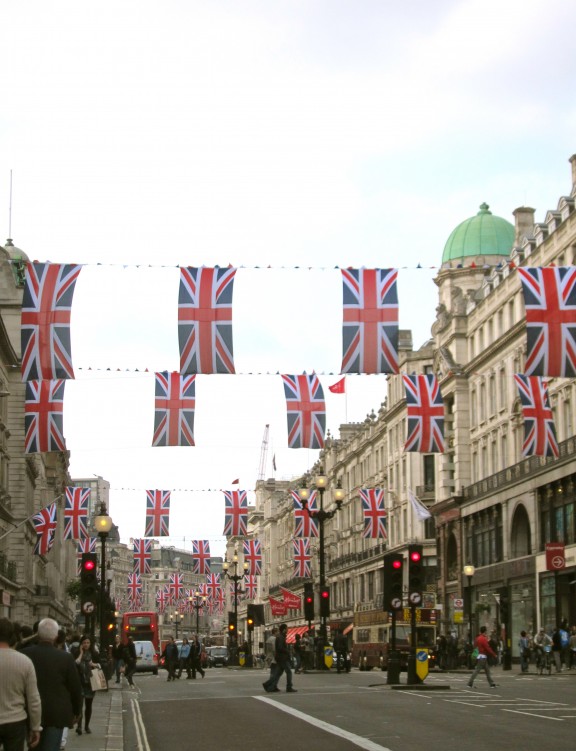 The wedding of Will and Kate is over, but the occasion is still very much alive in London.  Everywhere I go, people are talking about it…where they watched it, how lovely the dress was, how sad it was that Diana wasn’t there to see it, how poised the young couple was, how wonderful it is for the country.  The shop windows are full of their congratulations, and the street parties carry on for another day.

The Royal Wedding was very much a theme at Harrods.  The store windows featured elaborate wedding cakes designed for the occasion.

Inside the store, banners hung from the ceiling, and there was, of course, exclusive merchandise relating to the wedding.

Down the street at Harvey Nichols, a kiosk sold some quite irreverent items.  I overheard some disapproving comments, and there didn’t seem to be many takers.

The shop windows all over town offer their congratulations and, in some cases, use the wedding as a reason for a good sale.

This china shop had quite a selection of commemorative Royal Wedding plates and cups.  They were also still selling Diana merchandise.

My favorite part of today’s continuing celebrations was the Duke of York Square street party in Chelsea.

The wedding was being replayed on a large screen in the square, and there was a fantastic open market with vendors selling food from all over the world.  I picked up some chicken tikka masala and naan, and watched the wedding all over again.

These are Kate and Will commemorative meat pies.  “British beef, wine, bacon, pearl onions, mushrooms, and a dash of brandy in lovely pastry.”

And that’s not all.  There were drawings for a case of champagne and a Royal engagement ring replica.  Video messages for Will and Kate were being taped, to be made into a DVD that will be sent to them. There were costumed guards available to be posed with for pictures.  The tape of the Royal wedding stopped for awhile to make way for a fashion show that featured clothing from the local shops.

Complimentary photographs were being taken in a green screen booth, where the subjects were put into the Buckingham Palace balcony scene.  It’s hilarious. Check it out.

At the famous Saatchi Gallery, a statue of Prince William, by Jennifer Rubell, stood outside the door.  I talked this passer by into posing with him for me.  You can’t see it very well, but there’s a replica of the ring attached to his right arm, in just the right place for someone to slip their finger into for a photo.

On the walk back to my hotel, I spotted this charming handmade window display.  As one woman said to me at the street party, “Isn’t it wonderful to have an occasion that makes everyone all over the world happy?  The joy is contagious.”

Tags: England, London, Royal Wedding
admin
https://justonesuitcase.com
There are 2 comments for this article