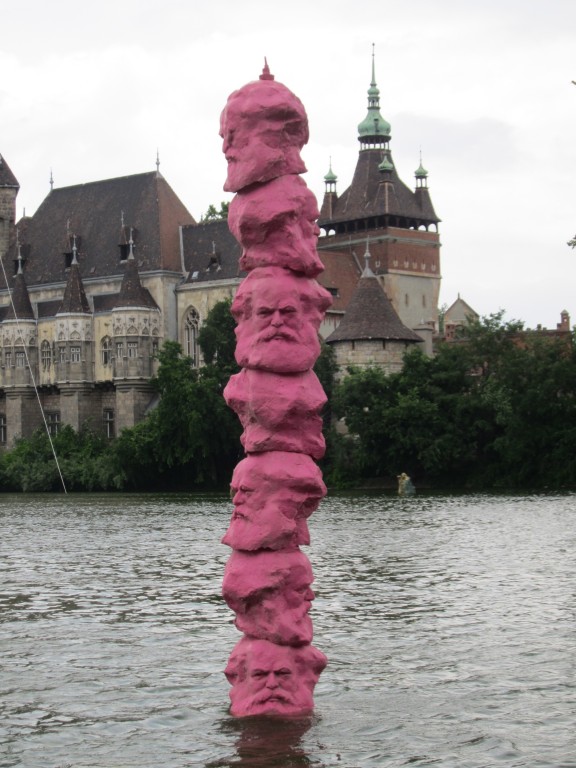 Budapest is an enigma.  It’s a city rich with architectural history, but still emerging from its communist past…so it feels like it’s a work in progress.

Buda and Pest are joined together by bridges over the Danube River, but have very little in common.  Buda’s ancient castles and churches rise above the river on hilly terrain.  Pest is flat, and is home to the commercial, political, and residential population…but that’s just geography.  Budapest is much more than the sum of its parts.

For me, the drama of Budapest is in the moments…hidden courtyards, indignant statues, wedding photos by a castle, and words that I can’t read but are completely transfixed by…

Doorways leading into courtyards are irresistible to me…I have to peek inside.  Each courtyard, called a kert in Hungarian, is entirely unique, from the humble to the grand.  Some have been made into local cafes and bars.

I don’t know if it’s because of Budapest’s communist past (replaced by democracy relatively recently, in 1989), or just that these particular men had a bone to pick, but the statues around Pest looked a bit disgruntled.

Even this figurine in the flea market looks a little annoyed

A bride and groom were having their wedding photos taken in front of Vajdahunyad Castle…with an unlikely onlooker.

A tribute to actor, Bella Lugosi, was tucked into a back corner of the castle.

Across from the castle is the c. 1903 bronze statue of a famous “faceless” monk, named “Anonymous.”  I was compelled to take photos of the people taking photos of each other with him.

In an antique store window, this bust of Lenin is a relic of communist life…the bathing cap is a comical, “take that!” to oppression.

In an effort to squeeze everything possible into a day, I arrived at the Museum of Applied Arts just before they were closing.  The girl at the door had no problem with letting me cruise through (the building was large, but the exhibits were limited) but the guards were not convinced. I managed to see everything I wanted to before I got chased out by a particularly irate guard…I thought she was taking her job far too seriously (especially when I saw her ranting to her colleagues about me), but I think she just wanted to go home.

This charming young family was all dressed up for church.

A group of friends chats in front of the Palace of Arts…the Budapest Gay Pride parade was happening later in the day.

Hundreds of policeman in riot gear gathered all over Pest in preparation for the parade.  I was perplexed by the riot gear…what on earth were they expecting?  I didn’t hang around to find out.

Then there’s the words.  I am captivated by these words that I cannot even begin to read.  I have to look back and forth from my map to each street sign at least three times, because I can’t retain the name for even a nanosecond.

The words are like art in a large, colorful street gallery.

Buda and Pest are a stage for some of the most interesting players I’ve seen anywhere.

Tags: Budapest, Hungary
admin
https://justonesuitcase.com
There are 5 comments for this article