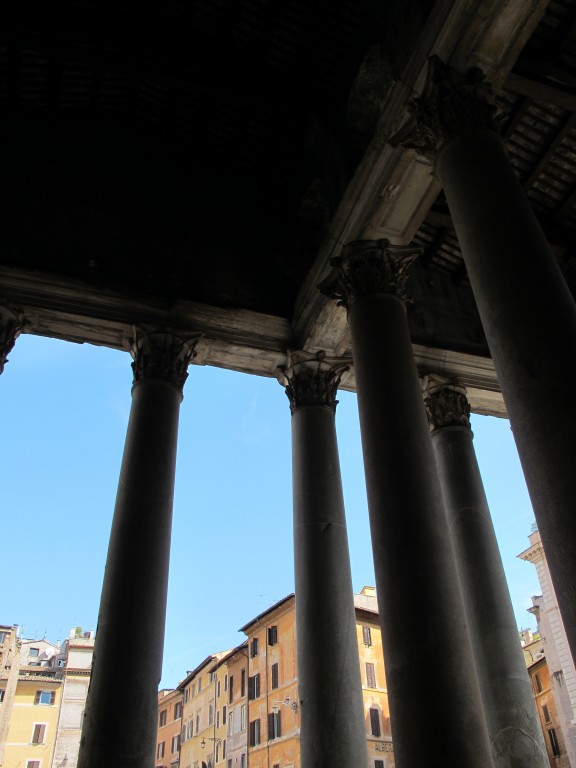 The city of Rome is a living, breathing, open-air museum, and I have been its patron for the past few days.

I marveled at the ancient ruins that have somehow survived in the midst of this modern city, sat in piazzas sipping wine and eating pizza, visited centuries old historical sites, but mostly just wandered the cobbled streets…and caught glimpses of the joyful, poignant, humorous, awe-inspiring, and colorful moments of Rome.

A young priest in the Pantheon looks up in wonder to the oculus that opens to the sky.

In Piazza Farnese, a woman tends to the pigeons around the fountain.  With tiny scissors, she releases the feet of one of the birds from tangled feathers.

With a bouquet of roses in his hand, this young man climbs the Spanish steps, leaving the long shadows of the crowd behind him.

I was captivated by the juxtaposition of the vibrant colors of the tourists against the timeworn Spanish steps.

This group of enthusiastic women pose at the foot of the steps in their “I heart Roma” tank tops.

On the landing of those same famous steps, a beggar woman kneels in prayer.

In the Piazza di Spagna, a resigned horse in a humiliating hat waits for his next carriage customer.

A day in Italy always requires a gelato break.  This is the gelatoria that Audrey Hepburn and Gregory Peck stop at in my favorite movie, “Roman Holiday.”

There’s souvenir stands everywhere…the vendor of this one didn’t seem to care much about how his wares were presented.  There was something comical about all those famous ruins in a big heap.

My first meal in Rome was a salad of mozzarella di bufala, tomatoes, and basil, and focaccia with rosemary, olive oil, and sea salt.

At 90+ degrees, it was pretty hot sitting outside, but even hotter inside with no air conditioning…and, anyway, it’s more fun to sit outside and people-watch.

This baker worked with the doors wide open to the Campo di Fiori.  He is making pizzas to be sold by the slice.  The finished pizzas are stacked up on shelves against the wall behind him.

Artists in the Piazza Navone display their work…this abstract looked striking against the backdrop of colorful Roman houses.

A couple of tourists pose with the artist who did their caricature.  The boy shrieked when he first saw it.

Colorful parasols were being sold to provide shade from the hot sun.

A street artist lays out his materials and then stops for a moment to think.

I was intrigued by the faded draperies on this doorway.  It turned out to be the charming Chiesa del Santissimo Sacramento.

In via di Torre Argentina this tiny shop is chock full, floor to ceiling, of colorful ribbon, braid, fringe, buttons, and tassels.  The proprietor was particularly proud of these intricate tassels.

A ribbon on this doorway celebrates the birth of a son.

The interior of 12th century Santa Maria Basilica in Trastevere is adorned with Byzantine-influenced mosaics, and golden angels.  My mouth dropped open when I looked up at this ceiling.

This portrait on the altar is contemporary, but it is painted in the same style as the original mosaics.

St. Anthony holds all of the notes from people hoping to find something that is lost.

Dogs wander the streets happily, with the possible exception of the one inside the gate where this sign is posted.

Ivy drapes itself over houses, and in garlands across courtyards all over the city.

Flowering vines have almost covered the door of this house.

I have never seen such magnificent marigolds.

Lunch on this day in Trastevere was a sack of homemade cookies from this unassuming bakery on Via Della Luce.  The kind woman putting it together for me even went into the back to get me a few warm ones.

Behind the pizzeria around the corner, I watched as this enterprising handyman used a homemade bicycle grinding machine, powered by the pedals, to smooth the edge of this wooden pizza peel.  He got a little help, but mostly amusement, from the chef.

The local Trastevere pizza in Piazza San Calisto was a white pie with mozzarella, parmesan, mushrooms, and lemon.  Fantastico!

I was mesmerized by the sun shining on these dresses hanging between the houses across this narrow street.  Isn’t it incredible how something so commonplace can be so breathtaking?

A nun opens Santa Cecilia in Trastevere to visitors at 4:00 in the afternoon.  On this day it was set up for a wedding. Happiness was in the air as the guests began to arrive.  What an absolutely lovely place for a wedding.

Occasionally, I encountered quiet moments in the narrow lanes, or vicolos, of this bustling city.

The tranquility in Santa Sabina Basilica was delightfully interrupted by this little boy racing to hide behind each column.

In one of those rare, surprising moments of travel, I saw people looking through the keyhole in this gate in Piazza dei Cavallieri di Malta…I took my turn and saw the remarkable view through a shaded path to St. Peter’s Basilica in Vatican City.

Ah, glorious Rome.  What more can I say?

Tags: Italy, Rome
admin
https://justonesuitcase.com
There are 5 comments for this article