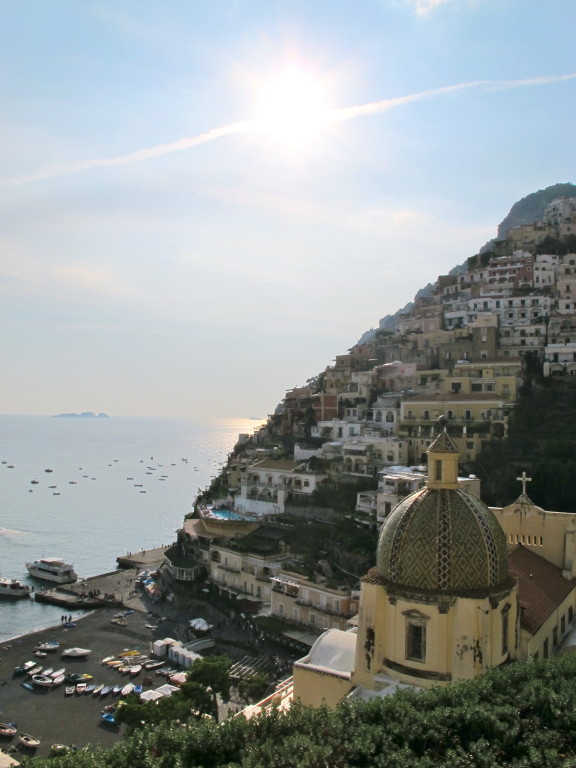 When I first got to Positano, I texted a photo to a close friend. Her response was, “This is a real place?” Gazing out at the astonishing vertical village rising up from the sea, I had exactly the same thought.

Positano is on the Amalfi coast of Italy and is said to have been founded in the 9th century. There are many tales of its beginnings, including a myth about the god Poseidon creating it for a nymph, and a legend involving a stolen Virgin Mary painting that spoke to its thieves, saying, “Posa, posa,” meaning “put me down, put me down,” thereby declaring the spot sacred land.

Walking around Positano is like being on a giant Stairmaster. Built on steep cliffs, it is a village of timeworn stairs, and hills made of uneven cobblestones. This is not a place in which to wear your heels.

The roads on these winding cliffs are so narrow, many people use motorized scooters and motorcycles as their mode of transport. Parking is not easy, either…

The narrow streets are lined with clothing stores selling locally-made linen garments. The factories are so close that if you ask for something in a different size, it’s brought down within minutes on a scooter.

The clothing is true boho chic, and so beautiful and inexpensive that you start buying shirts and dresses and pants…until you realize that you’re probably not going to be wearing white linen anywhere but Positano.

Guess I’ll just have to go back.

The original, and most famous, clothing store in town is Maria Lampo. Maria and her husband, Alfonso, opened the store, the first in Positano, just after World War II.

A sign was posted outside their shop advertising “made to measure trousers.” When customers would ask how long the trousers would take, the reply would be to go to the beach and come back in a couple of hours. No one really believed it, but they would return after two hours and their custom-made pants were, indeed, finished.

People would say, “Maria, you are as quick as lightning!” and so the name Maria Lampo (Italian for “lightning”) was born.

In addition to the classic linen shirts and pants, she makes dresses, blouses, and men’s bathing trunks from traditional cotton bandanas. She told me the gift of one of these scarves is good luck, and she signed her name on a blue and white one for me. Her granddaughter works with her now, keeping the business in the family.

In her nineties, she’s still there…with a wall of photos taken with the celebrities that have sported her clothes (Dustin Hoffman and Colin Farrell among them.)

If there’s an antique store somewhere, I’ll find it. Sure enough, there it was, no name, just a dusty, hodgepodge of Amalfi coast relics.

Benches are built into the iron railing that borders the sidewalk. They look like modern art.

As you climb the mountain road, the view becomes even more spectacular.

The majolica tiled dome of the church of Santa Maria Assunta can be seen from almost every vantage point.

I could not stop taking pictures of the houses on cliffs. It was just so fascinating how, like cheerfully colored building blocks, they were stacked one on top of the other, in the nooks and crannies of the mountains.

Even the houses themselves were on many levels, as they aligned with the incline of whatever cliff they were perched on.

Below, a vast pebbled beach dotted with bright orange umbrellas borders the sea.

At the end of the day, the streets get quiet, and the restaurants and houses light up.

Positano has been attracting large numbers of tourists since the 1950s, especially after John Steinbeck published his essay about Positano in Harper’s Bazaar in May 1953:

“Positano bites deep”, Steinbeck wrote. “It is a dream place that isn’t quite real when you are there and becomes beckoningly real after you have gone.”