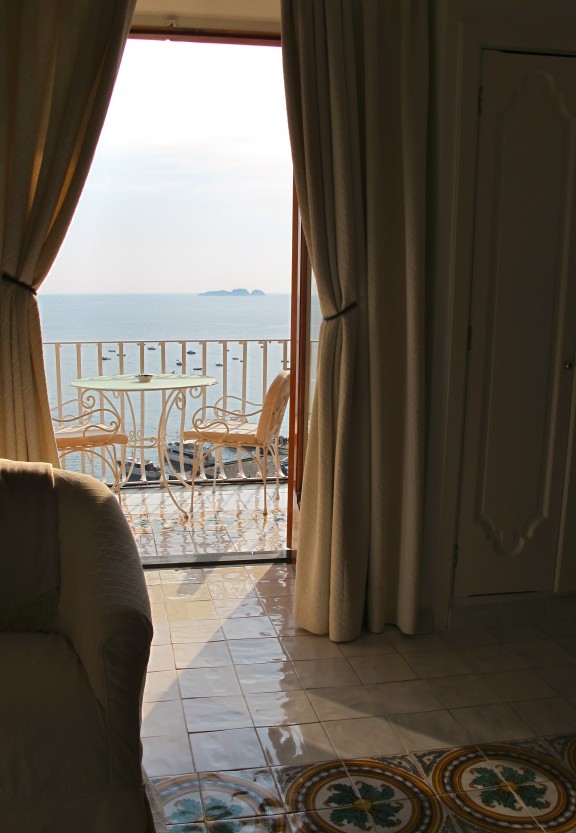 “We went to the Sirenuse, an old family house converted into a first class hotel, spotless and cool, with grape arbors over its outside dining rooms. Every room has its little balcony and looks out over the blue sea to the islands of the sirens from which those ladies sang so sweetly.”

This was how John Steinbeck described Le Sirenuse in 1953.

It is still run by the same family, and it is spectacular.

In 1951, the Sersale family turned their summer house into a glorious hotel overlooking the bay of Positano. It still feels very much like a grand private home, but with all the luxuries of a well-appointed hotel.

You can hear from Le Sirenuse (and Antonio and Carla Sersale) in this charming video on Semaine.com.

Antiques and art make the hotel feel like a home. They add that touch of character that is so often missing in contemporary hotels.

The outside is brought inside with greenery. Vines hanging from ceilings, lemon trees around the pool, towering palms in hallways—and a majestic thirty-year-old fern.

My decorating color palette is usually limited to shades of neutral, with little pattern—but the colors and designs of these tiles were so exquisite, I was bewitched.

There is no better way to start a day than eating breakfast on the veranda of Le Sirenuse, overlooking the sea, the Sirens, and Positano.

Almost as impressive as the setting was the abundant spread.

Why not eat lunch on that same veranda? The awe-inspiring view is before me, the pool and hotel at my back.

If I could eat only one meal for the rest of my life, it would be this insalata caprese.

The logo for the hotel is embossed on the menus—a pair of mermaids that recall Homer’s Sirens on the islands in the distance.

When I first arrived at the hotel, I noticed the day of the week was woven into the jute rug in the elevator.

Hmmm, I wondered. Do they change it every day? Nah…it looks like it’s permanently fixed. That would be too much trouble.

They do! (I know, I am probably the only guest that’s ever been excited by this.)

The lovely guest rooms have cool tiled floors, cozy white slipcovered upholstery with embroidered pillows, and a grand coronet over the bed.

The best part is that all fifty-nine rooms face that amazing view.

Le Sirenuse is one of those memorable hotels that has the remarkable combination of a beautifully designed environment, exemplary service, in a spectacular setting. It’s been in the top ten list of Travel + Leisure and Condé Nast Traveller magazines for years.

It will remain in my top ten list until the end of time.