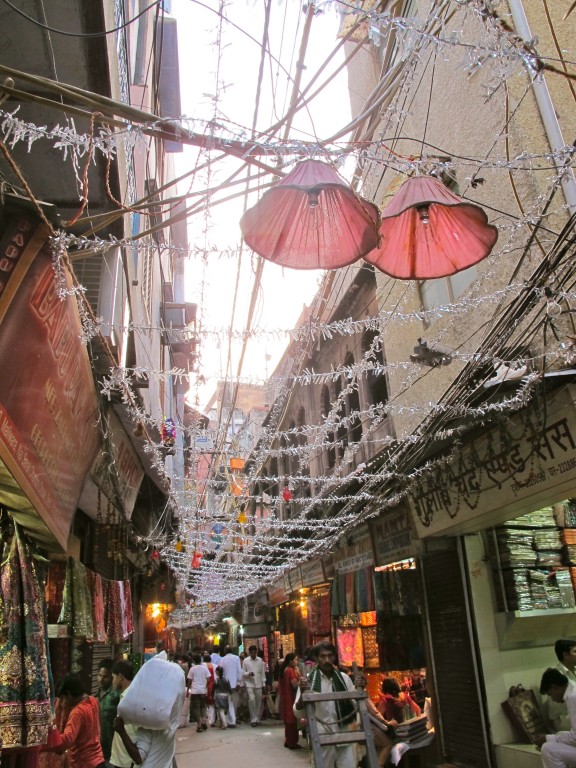 I’m in Connecticut and it’s snowing.

Twenty-four hours ago, I was standing in the bazaar in the center of Old Delhi, dripping with sweat and covered with dust.

Just twenty-four hours ago I was dodging bicycle rickshaws, stepping over sleeping dogs and garbage and red pools of paan, and marveling at the magnificent colors in my midst.

Diwali decorations were woven into the tangle of wires overhead that presumably provide electricity.

Yesterday, I watched women shop for sarees, and men get haircuts and shaves along the street.

The pungent smells of exotic spices and fried chaat, ripe fruit and tangy libations, intermingle with the reek of urine and discarded scraps of food.

I passed an enterprising young man who had set up his own Delhi version of Starbucks, complete with a delivery boy.

Temples of worship, both formal and makeshift, are all around.  The ritual of prayer is an integral part of daily life.

Bowing my head, palms together in front of my heart, I extended the traditional Indian greeting of “namasté.”  In return, I received namastés with palms clasped and bowing of heads…and smiles for my camera.

Today I look out my window to trees heavy-laden with white snow.

It’s half a world away now, but I only have to close my eyes to see all the vivid colors of my yesterday in India.

Paan: Betel leaf spread with spice and nut mixture; chewed to help with digestion and as mouth freshener; when chewed a red dye is released, which is spit out, rather than swallowed.

Diwali: One of the most important Hindu holidays, known as “Festival of Lights,” celebrating a historical event wherein good conquers evil.

Tags: Delhi, India
admin
https://justonesuitcase.com
There are 3 comments for this article