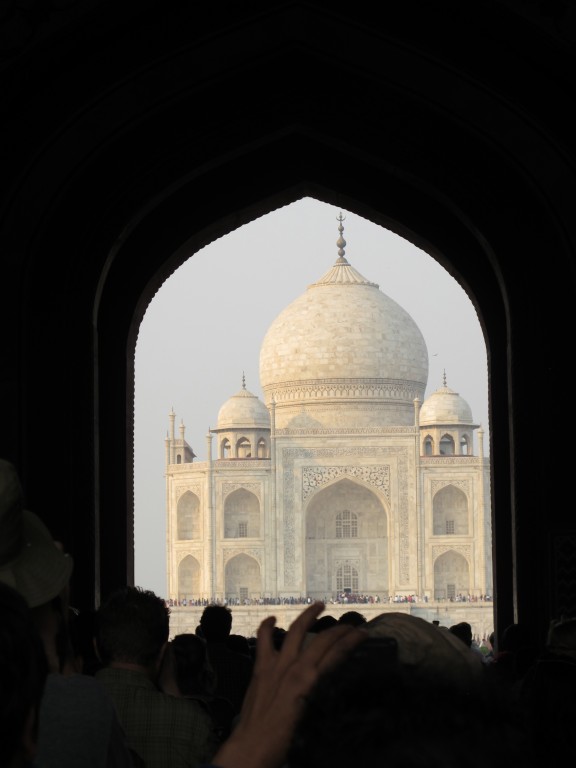 With great reverence, I walked towards the Seventh Wonder of the World, the marvelous monument to undying love, the exquisitely carved massive marble dome glowing in the sunset…but where there’s tourists you just can’t take anything too seriously.

It was the week of Diwali, one of India’s two most important holidays.  Everyone was on vacation, and it seemed that most of India had chosen to visit the Taj Mahal.  The long queues at the entrance were curiously segregated.

My friends and I joined the Indian Ladies queue because it was going faster.  It didn’t seem to matter that we were blonde and clearly not Indian.

Once inside, all roads, and all people, lead to the Taj.

The Taj Mahal was built in the 17th century by Mughal emperor Shah Jahan, in memory of his beloved third wife, who died giving birth to his fourteenth child.  He expresses his grief with these poignant words:

“The sight of this mansion creates sorrowing sighs; And the sun and the moon shed tears from their eyes.”

I’m afraid there were some sorrowing sighs with the realization that the orderly queue outside was only the beginning.  There was a series of rather chaotic queues to get closer, and then inside, the monument.  Let’s face it, it was pretty much every man for himself.

The row of tourists looked like a length of colorful Indian braid against the marble filigree.

You get to this point and think you’re in…but there’s a run for it to the next queue.

Temporarily abandoned shoes (they must be removed before entering the sacred shrine) are strewn along the wall.  I wonder if anyone forgets where they left theirs and has to leave with bare feet.

I have a confession to make.

We blew the queue and went in the exit…but could only get so far before we were stopped by a guard.  Here are the few photos I took inside.

I don’t mean to sound blasé…the inlay detail and carving is exquisite.  It was just so hilarious getting inside that it was difficult to maintain focus.

I do love this photo of the silhouettes in front of the marble pierce-work.

This was the scene at the exit. (Yes, the one we entered through.) I guess a bored kid at a museum is universal.

A young couple got into the spirit of love that inspired the Taj Mahal…they posed for my photograph.

Tourists struck goofy poses to get photos of themselves seemingly holding up the dome of the Taj.  Seriously, they looked ridiculous.

I was minding my own business, taking photos of the tourists…

…when, suddenly, a young man appeared by my side and began shooing people out of the way, and…huh?…telling me what to do.

“Come over here, this way.  Right here, sit down, sit down.  Take the picture.”

Oh, I see, there’s a reflection there.  Okay, sure.

Alright, alright. I got it.  Truth is, I wouldn’t really need another view of another reflection, or even another photo of the Taj for that matter, but he’s making me do it.  (Am I really letting this guy boss me around?  Evidently, yes.)

I don’t know the significance behind the one rolled-up pant leg, and I didn’t dare ask…I just did as I was told.

Oh, I see, now we’re photographing the tombs of Shah Jahan’s other wives.  With reflections, of course.

“Now stand here put your arm up like this, okay, right there, now don’t move.”

I can’t believe I just did that.  Is this some kind of Hindu hypnotism, or what?

This was the last photograph he told me to take…

…and then I gave him 300 rupees (about $6) and off he went, to hijack another unsuspecting tourist.

As the sun sank behind the glorious tribute to love, the crowds dispersed.

I thought I’d taken enough pictures of that Seventh Wonder to last a lifetime.

Then, the next morning, I looked out my hotel room window.

Tags: Agra, India, Taj Mahal
admin
https://justonesuitcase.com
There are 10 comments for this article