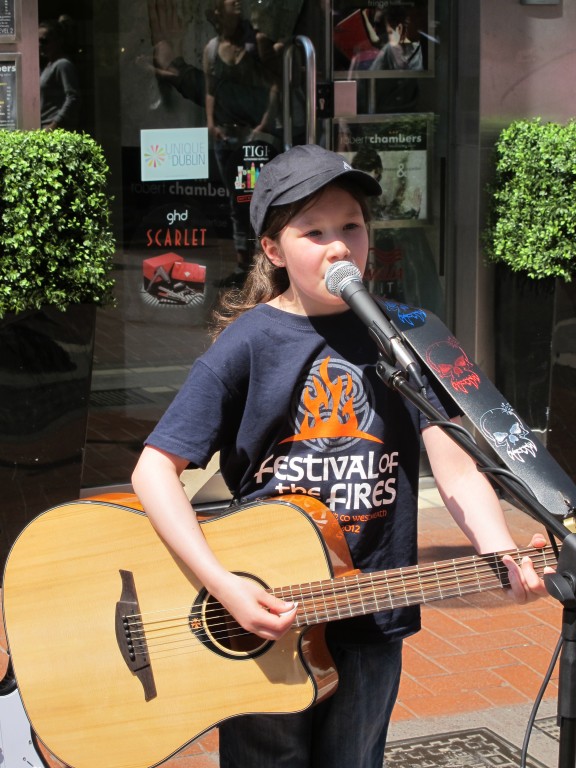 When I saw the little girl with the pony tail setting up her microphone on Grafton Street in Dublin, I thought, “How cute.”

When she opened her mouth to sing, a song that she had written herself, I was mesmerized.

The schoolgirl from Mullingar, Ireland, picked up her sister’s guitar at age four, and played chords before even knowing what they were.

She has recently become a bit of a celebrity in Ireland, appearing on Irish television show, “The Late Late Toy Show,” in December.

The television appearance prompted her to release her first song, “Friends Forever,” on iTunes.

The ballad surprised audiences with its sophistication…not what you would expect from a nine year old.   Her parents told Irish newspaper, The Independent, “It’s almost like Ashley has adult emotions in a child’s body and is able to transfer these into songs. She might go two months without writing anything and then suddenly come down with a whole song finished.”

Also in the article was this comment from Thomas Black, who operates an independent A&R consultancy service for unsigned artists:

“It would be impressive enough if Ashley was 19, never mind nine.  The song’s lyrics are innocent without being childish, and the song structure is perfect.  She has a bright future if she is steered in the right direction.”

In the meantime, she’s busking on Grafton Street, where Academy award-winning singer, Glen Hansard (from the movie, “Once”) got his start.

Her mom, Samantha, helps with setting up.

A woman walked up and said to the man standing beside her, “Is that the little girl who was on the chat show?”

As for Ashley, she’s a remarkable girl, doing what she loves.

“Look at me now, I’m in a world that you dream to be in…and I’m loving it…That’s just me.”

Tags: Dublin, I R E L A N D
admin
https://justonesuitcase.com
There are 2 comments for this article