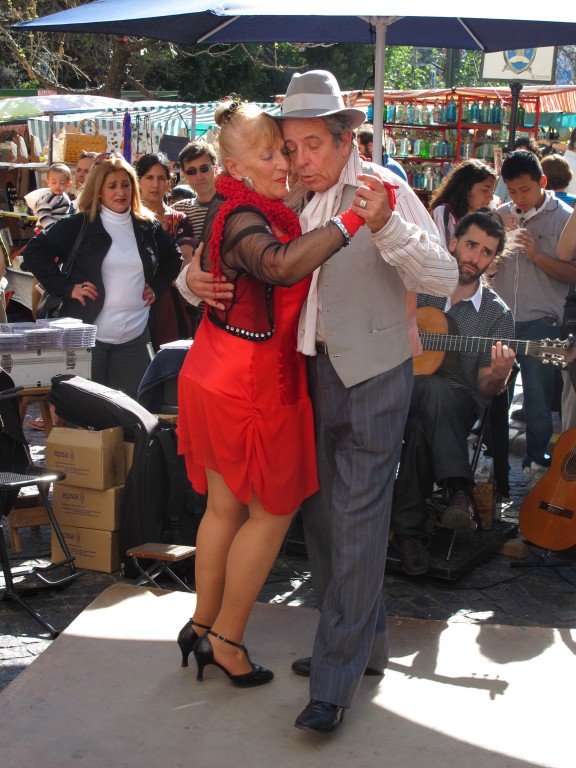 Tango dancing is an integral part of Buenos Aires history, so I wanted to see a tango show while I was there. Real tango, not for the turistas.

First, a little background: Everywhere you go in the city, there’s evidence of tango.

The couple above has been dancing the tango for tourists in San Telmo for so long that their photo is on the Wikipedia page for “Argentine tango.”  (Obviously, I’m not the only one who took advantage of that photo op!)

Tango music was born in the late 19th century, in the Buenos Aires neighborhood of La Boca.  From the melting pot of immigrants came an amalgamation of musical styles resulting in the passionate, theatrical tango.

Fast forward to today, where tango has become a tourist attraction.

There are even places where one can have their photograph taken with a “real” tango dancer.

I found out that to see real Argentine tango, I should go to a milonga. Milongas are places in which locals go dancing.  Sounded good to me, so I asked around and was told to go to a place called Confiteria La Ideal.  Built in 1912, I was told the upstairs ballroom was a must-see.

I had dinner in a neighborhood café and then hopped in a taxi. When I told the driver where I was going, he insisted there was a far superior milonga elsewhere. So, spontaneously, I agreed to let him take me there. (The whole conversation was in Spanish, which I don’t speak, but I understood the gist.)

He dropped me off at Café de Los Angelitos.

I had no idea what to expect, obviously, so when I walked through the door into, by all appearances, an ordinary restaurant, I thought, “Where’s the milonga? Tango anyone?”

As soon as I said the word “tango,” several men in suits quickly whisked me inside, through heavy curtains, into a dimly lit, theatrical room with a stage draped in red and gold velvet. The room was filled with long tables of people–tourists if you will–dining on steak and drinking wine.

Before I knew what was happening, I was seated at a table, asked for my credit card, and a glass of wine was placed in front of me. Something was said about a ride back to my hotel.

“No problem, just pay for the show. Still includes the trip back to your hotel.”

What does that mean??

“Are you sure this isn’t a show just for tourists?”

Furthermore, “What time does this show start?”

As I sat with my glass of wine, wondering what I was going to do there for an hour and a half while everyone else was eating, I started to wonder what the other milonga, at Confiteria La Ideal, would have been like.

Impulsively, I got up, said I’d be back (not entirely sure that I would), and walked out–hopping into another taxi.

It took quite a while to get there, and the taxi driver was reluctant to drop me off in what appeared to be a rather seedy neighborhood. I’d gone all the way there, so I had to check it out.

I walked into the lobby of Confiteria La Ideal, where a woman sat at a little table, selling tickets to “the show.”

Beyond her was a huge room with about five tables of people at one end of a vast expanse of timeworn linoleum floor. Glass cases stood like ghosts, empty except for a sprinkling of dust. The lighting was fluorescent, which gave the room a grayish-cast, further exaggerating the grim, and very un-festive, un-tango-like, atmosphere.

“Not upstairs?” *(In the famous ballroom?)

I took one more look, said, “Gracias,” and went back outside . . . to hightail it back to La Café de Los Angelitos.  With any luck, I could still get back in time to see the show there.

Within a few minutes of getting into my third taxi of the evening, the plump driver (who spoke some English…not always a good thing), began talking about how he had recently begun going to the gym and working out.

Then, stopping at a red light, he asked me to flex my arm so he could feel my bicep. I know, I know, it sounds bad, but it really was innocent to the point of stupidity.  Apparently impressed by my bicep (???), he asked me to arm wrestle.

Yes, this is getting weirder by the second. The arm wrestling and the conversation went on for quite some time, to the point where I wondered if he was, indeed, more sinister than I may have originally thought.

Then he began to look around, and I knew I was in trouble. He admitted that he had been talking so much that he’d gone the wrong way.

I wasn’t concerned for my safety, because he seemed more embarrassed than dangerous, but now I was nervous I would miss the show and end up back at my hotel without seeing any tango at all.

When we finally arrived back at Café de Los Angelitos. I couldn’t get out of that taxi fast enough.

I went back into the restaurant, through the curtains, to my table—-where my glass of wine was still waiting! They really did believe I was coming back.

The lights went down and the show began.

In a dramatic cloud of fog, a lone man stepped onto the stage and sang about the origins of tango. (I think that’s what he was singing about…it was in Spanish.)

Then the dancers appeared, and for the next hour I was mesmerized, as each era of tango in Buenos Aires, in all its glory, whirled across the stage.

In between dance segments, a gorgeous, glittery, chanteuse sang her heart out.

The costumes, the fancy footwork, the music…I didn’t care if it was a show for tourists because it was fabulous.

And then it was over, and, as quickly as I had been ushered in, the crowd was shuffled back out through the restaurant and onto the sidewalk.

Vans were waiting to take everyone back to their hotels. Aha–the ride included with the price.

Maybe it’s not so bad to be a tourist sometimes . . . at least I didn’t have to take another taxi.

Tags: Argentina, Buenos Aires
admin
https://justonesuitcase.com
There is 1 comment for this article