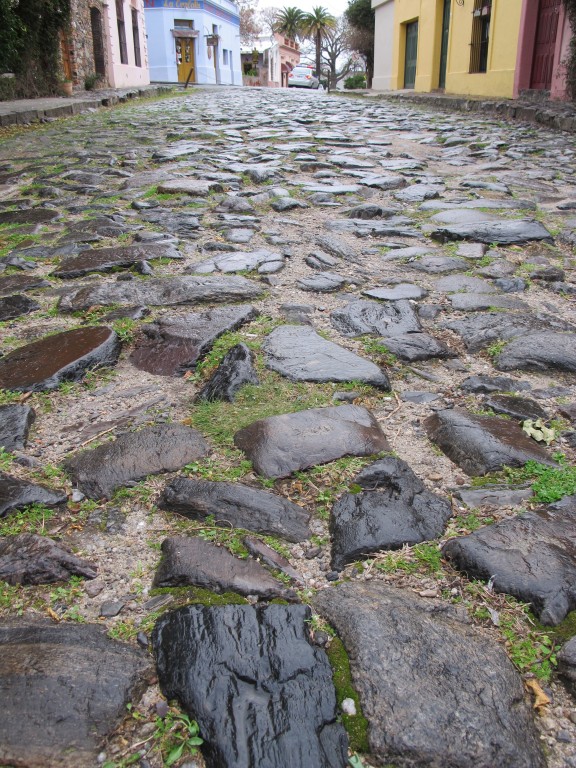 On a rainy morning in Buenos Aires, I hopped a ship.

The “rapido buquebus” got me across the Rio de la Plata to Colonia del Sacramento, Uruguay in just under an hour.

I emerged from the ferry station and hailed a taxi to go to my hotel, on the outskirts of the village. This was my taxi driver.

He dropped me off at the Costa Colonia Riverside Boutique Hotel, which is a new, very cool, modern hotel.

I checked in, dropped off luggage in my room, unpacked my raincoat, found my umbrella, and reorganized my bag. Then I called down to reception and asked them to call me a taxi to go back into the village. (No public transportation here.)

This was the taxi driver that arrived at the hotel…yes, he’s the same one!

We both had a good laugh. He invited me to sit in the front seat and gave me candy.

He dropped me off in the middle of town, at the Plaza Mayor 25 de Mayo.

Everywhere I looked it was, well, deserted. A stark contrast from the noisy throngs in Buenos Aires.

The Historical Quarter of Colonia del Sacramento, founded by the Portugese in 1680, has been designated as a World Heritage Site by UNESCO. Remarkably unchanged in appearance, Colonia, the oldest town in Uruguay, remains an example of a colonial settlement in the 17th and 18th centuries.

I saw the 19th century lighthouse, but didn’t feel the need to climb to the top for the misty view.

I wandered. No map necessary. I headed towards the Rio de la Plata. For years Colonia was a smuggling port, evading the trade regulations imposed by the Spanish.

Okay, enough of that. Back to civilization. What there is of it, anyway.

The decades-old, rusted cars made it feel like a movie set. Is this for real?

While we’re on the subject of cars, at El Drugstore Restaurant, you can have your meal in a car.

Across the street from El Drugstore was the church, Iglesia Matriz o Basílica del Santísimo Sacramento. When the rain started up again, I ducked inside.

Built around 1808, the interior is understated and serene.

There are three stories behind the mysterious name:

1 – Criminals who were condemned to death were led along the street of “sighs” to the river, to be drowned when the tide rose.
2 – Brothels used to line the street, entertainment for sailors after their long sea journeys.  The sailors would sigh over the ladies of the night as they walked down the road.
3 – One marvelous moonlit night, a young maiden was waiting in the street for her love. Suddenly, a masked man stabbed her with a dagger. All that was heard as she died was her sigh, a breathless call to her lover…

There were some irresistible doorways. The house numbers are blue and white tile, too.

This facade was covered entirely in mosaic tile.

Every once in awhile I’d spot a random, hand-painted tile.  Like a treasure hunt find.

This mosaic at the entrance of a shop doorway was made of pieces of the lovely tile.

There was even blue and white tile lining the walls of the public bathrooms.

(This was the sign that led me to discover the hidden public bathrooms.)

I peeked through this gate.

It was some kind of freaky outdoor museum. You be the judge.

I stopped into a few shops.

And an art gallery.

I loved the sign for this little hotel, with its graceful letters fashioned out of iron.

Then the sun came out for a brief moment. At the edge of the village square was this chess set made of plastic bottles.  The ruins behind it are what remains of the 17th century Convent of San Francisco.

The clouds moved back in. The gray, foggy day was punctuated by the colors of the village…an orange house with potted plants on its windowsill…

…an orange dog in front of another orange house…

…and an orange tree.

Red scooters in front of a chalky blue wall and mustard-yellow door.

A green garage door in a yellow building.

The rain was really starting to pick up, and I was hungry, so I started looking at restaurants.

I walked towards the old drawbridge to take a photo of this dog, and behind him was a cozy white house that turned out to be my place.

The entrance to La Florida is down a set of stone stairs.

As soon as I saw the interior, I knew I was going to be there for awhile.  It was warm and welcoming, and the voice of Ella Fitzgerald singing “Cheek to Cheek” filled the room. A perfect place to spend a rainy afternoon.

I was greeted by a friendly woman and sat down in the corner with a glass of wine.

She turned out to be the wife of the owner, and chef, Carlos Bidanchon.  Their hospitality was infectious…soon all the guests were in conversation with Carlos and each other. He told us that he’d been chef at the famous Cipriani’s Restaurant in Milan and New York, before opening La Florida.

Then he left to cook my salmon (with a curry cream and leek sauce) and I continued to chat with the other guests…a British couple, and a young man who was also a chef.  He had heard accolades for Carlos’s cooking, and was here to be inspired. He declared that La Florida had the perfect formula for a great restaurant: “Good food, good people, good music.”

While my meal was cooking, I, as I’m apt to do, took a look around.

I walked outside, through a terrace, where a table was set up in an alcove.

I went through a door into another part of the house, down a corridor where the ceilings were draped with fabric.

The walls were covered with eclectic artwork and family memorabilia.  Cupboards were filled with glassware, and bottles of wine.

Around every corner was another room set up with tables ready for guests.

I went back to my table to eat my delicious salmon, and then Carlos brought out his homemade liqueur.

He puts fresh fruit juice, sugar, and water into a bottle and lets it ferment into this potent libation.  There were several different flavors (including lemon and raspberry/blueberry) and we had to try them all.

I’m not sure how long I stayed there, but when I went outside the dog was still there.

I took one last look at the cobbled lanes, and the funky cars, and the gorgeous color palette of the ancient buildings…

…and, as the skies grew darker, I called a taxi to take me back to the hotel.

Alas, it was not the same driver.

The next day I boarded the one and only ferry back to Buenos Aires.  Thirty minutes after it was supposed to embark, it still hadn’t moved.  An announcement was made, in Spanish, and passengers started looking around and getting up.

The captain, in full uniform, came out and announced (someone was translating for me) that the windy weather had caused the anchor to come loose, and it was gone.

They could either wait for another anchor to be transported to Colonia from Buenos Aires (which could take hours), or get approval from the authorities to make the journey across the Rio de la Plata without one.  In the meantime, coffee and Coke would be free…which resulted in a mad rush to the snack bar.

As there was no other option, we all hunkered down to await the decision.

After an hour or so, it was announced that we had been given permission to travel without an anchor.

…and I wondered: Can a boat be docked without an anchor?

Tags: Colonia del Sacramento, Uruguay
admin
https://justonesuitcase.com
There is 1 comment for this article