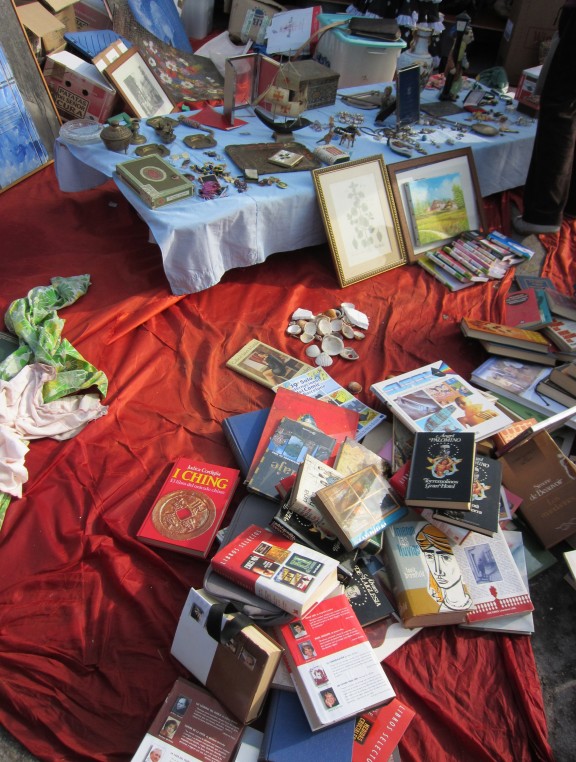 I’ve been to a lot of flea markets, and they’re all pretty similar: tables under tents lined up in straight rows, or stalls bordering narrow lanes.

Barcelona’s biggest flea market, Mercat de Fira de Bellcaire (The Festival Market), more commonly known as Els Encants Vells (The Old Flea), is said to have its origins in the 14th century. In a large parking lot, old and new merchandise is piled up and strewn over the ground.

The atmosphere is pandemonium.

The crowds jostle to try to see what’s for sale, stepping over the goods (and sometimes, unavoidably, on them.) The vendors shout above the commotion to broadcast their low prices. Some just yell “DOS EUROS” over and over again, indicating the 2 euro price on everything they’re selling.

TWO EUROS. Too bad there was nothing I wanted out of the dos euros pile.

Heaped on the ground is the most nonsensical combination of stuff you could ever imagine. Antiques are mixed in with new electronics, children’s toys, CD’s, boxes and boxes of DVD’s and videos (many of the adult-only variety), packaged underwear, power tools…well, you get the picture.

To top it off, the backdrop is the outrageous, bullet-shaped Agbar Tower (designed by a French architect in 2005 for the Agbar Corporation), adding yet another element of weirdness to the scene.

For some bizarre reason, a low barrier of books are tossed helter skelter across the front of all of the antique stalls (if you can call them that), so you have to step over them to get to anything.

In the ramshackle buildings bordering the market, plumbing supplies, furniture, kitchen cabinets, toilets, and mattresses are spilling onto one narrow street.

Adjacent to that are open stalls full of, well, I don’t know quite how to describe it so I’ll just show you the pictures.

There were several booths hung heavily with dusty chandeliers that, I fear, were not in working order.

This guy was playing the keyboard he had for sale in his booth of random objects.

I loved this little chair, enough to start calculating how to get it into my suitcase…but it wasn’t for sale!

How ironic is that in this setting?

I “talked” for quite a while to this cigar-smoking character, in the way that I talk to people whose language I don’t really speak. I liked him, and would have loved to buy something from him, but, honestly, his stuff was junk. I smiled and said I’d be back.

I did find a few interesting ceramic pieces and some other odds and ends, but this was one flea market where I didn’t need my extra tote bag. Even I, the most stalwart of flea market shoppers, could not conjure up the effort needed to sift through those piles.

That’s okay, though. An adventure is never a waste of time.

Tags: Barcelona, flea market, S P A I N
admin
https://justonesuitcase.com
There is 1 comment for this article