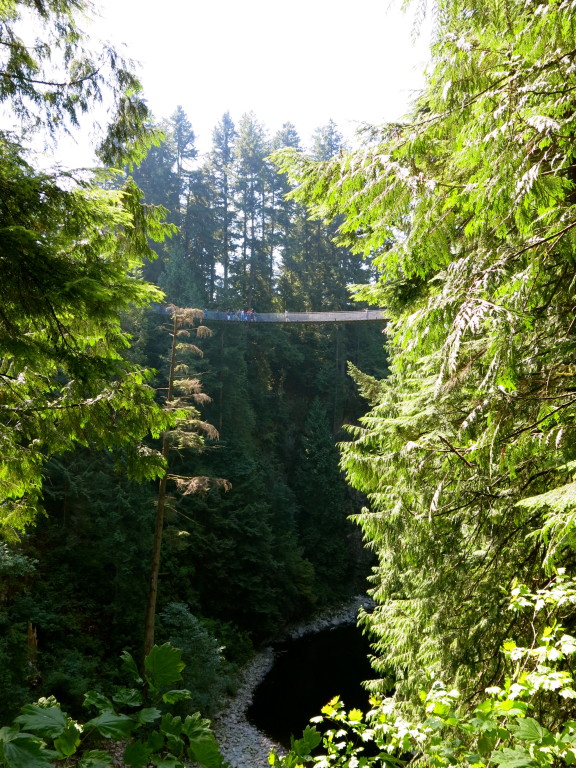 My travels don’t usually take me into the wilderness, but when I was in Vancouver, Canada, I couldn’t resist a day of exploring – starting with a lurching, swaying, suspension bridge high above the Capilano River.

The Capilano suspension bridge hangs about 200 feet above the river, and stretches 500 feet across.

As I embarked, this man was hurrying back to the entrance, muttering to himself that there was no way he was going to do this.

(I’m not typically afraid of heights, but even I found myself hanging onto the railing as the bridge rocked back and forth.)

The view to the river below was breathtaking.

The bridge led into the trees on the other side, where a series of smaller bridges swagged from tree to tree.  Scurrying up and down and over and under among the towering trees made me feel like I was ten years old again.

Circular steps led up to a wooden walkway that hung, via cables, from the side of a rocky cliff.

A cantilevered platform jutted out over the ravine.

The late British fashion designer, Alexander McQueen once said, “There is no better designer than nature.”  I looked over the raiilng at nature’s design…

I gazed down at the intricate patterns of delicate, wispy ferns growing out of the craggy rock face.

I glanced up at the dazzling sun glinting through the canopy of shadowy leaves.

I contemplated, and committed to memory, the countless shades of green before me, and was grateful for the ability to be inspired as a designer – even standing on a precipice in a Canadian forest.

“The tree which moves some to tears of joy, is in the eyes of others only a green thing that stands in the way…but to the eyes of the imagination, nature is imagination itself.”

Tags: Canada, Vancouver
admin
https://justonesuitcase.com
There is 1 comment for this article