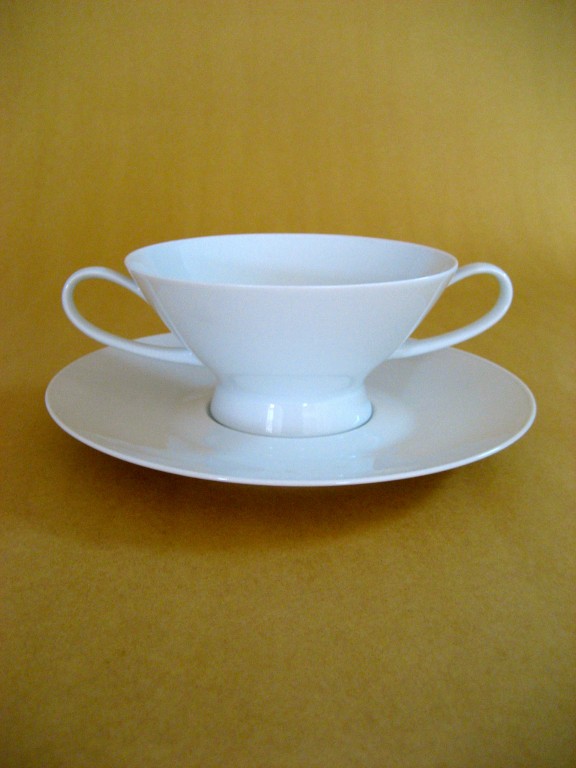 On a shelf crowded with figurines, trivets, and other random objects, I spotted a set of uniquely-shaped white porcelain cups with handles on two sides.  They were inexpensive and I was intrigued, so I bought them.

I discovered that they were actually designed in the 1940’s by Raymond Loewy, for the German porcelain company, Rosenthal.  After World War II, Rosenthal’s traditional line of fine porcelain based on pre-war designs was stagnant, and Loewy was recruited to help update their image.

Born in Paris in 1893, Loewy emigrated to the United States at age 26, became a window-dresser, and worked as a freelance fashion illustrator for Harper’s Bazaar and Vogue.  Disappointment with the quality and, in his opinion, vulgarity, of American products led him to a career in industrial design that continued into the 1980’s.

In October, 1949, Loewy appeared on the cover of TIME magazine. The article described him like this:

“Everything he does calls attention – with skilled showmanship – to his work, so that observers at times get the strange feeling that he too is a design – by Loewy, of course.”

This past week, on November 5, Google paid homage to the “father of industrial design” on what would have been his 120th birthday, with their Google Doodle based on one of his locomotive designs.

So back to my porcelain cups – the best part is the surprising name of the design:

If Loewy had only known in the 1940’s that the name of his design would foretell how suitable, and downright perfect, it is in the 21st century.

Then again, he was a visionary of extraordinary proportions – so he probably knew.

Tags: Raymond Loewy
admin
https://justonesuitcase.com
There is 1 comment for this article