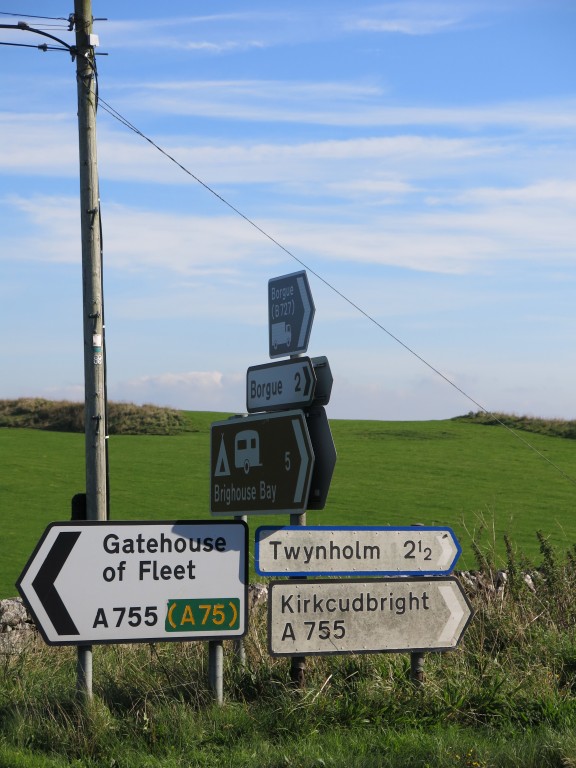 I had a limited amount of time in Scotland, and I knew I would go to Edinburgh and Glasgow – but I also wanted to see a bit of the country.  My first choice would have been the Highlands, but I didn’t have time to do that trip.

So I did what I always do – I looked for an interesting place to stay.  Whenever I’ve found a great bed and breakfast or inn or hotel, it has lead me to an equally great town or village or city.  So I found a bed and breakfast, owned by a well-traveled designer and writer, in a town in the southwest corner of Scotland, called Kircudbright(pronounced “ker – COO – bree’). Kirkcudbright is historically known as an “Artists’ Town.”  Exactly the type of place I like to see.

First, I would need a car.

The day started with a taxi to the car hire office in Edinburgh.

During the ten minute taxi ride, I heard my driver’s life story, including his personal financial details (he owns two apartments in Edinburgh that he rents out, and has no mortgage on his own house) and his retirement plan to move to Perth, Australia and coach soccer (as the only certified soccer coach in Australia.) If he finds a house he likes when he goes to visit in December, he’s going to sell up his property in Scotland and buy it on the spot. His two daughters, just out of college, are planning to move there with him, leaving their mother, his ex-wife, on her own in London.

Whew.  That was exhausting.

When I got to the car rental office, they had no GPS devices, although I had reserved one, which should have guaranteed that they would have one, but they unapologetically did not, which would make a drive through the countryside of Scotland, on the left side of the road, downright impossible.

This was not a good sign. Hopefully not an omen for the trip, I’m thinking.

After much discussion, it was determined that I could drive to the airport and procure a GPS device from their office there.  I was given a rudimentary hand-drawn map that looked like a straight line intersected by three circles, which represented three roundabouts on a straight road. At the end was a left turn to the airport – seemed simple enough.

I got completely and desperately lost.  Which is why I need a GPS!

Forty minutes later, driving on dirt roads through corn fields, I found the airport (don’t even ask me how), and paid $10 for parking so I could go inside and get the GPS.

I turned out of the airport and almost flipped the car, overcompensating on the left side and hitting the curb.

Should be smooth sailing from here on out.

I drove over hill and vale, and through town after town, concentrating intensely on driving on the left side of the road.

I was stopped in my tracks by a house covered entirely in crimson-colored ivy.

I made a U-turn and stopped so I could photograph the house, and a couple of guys named Martin and Derek stopped their car and asked me to photograph them, too.

After the photo op, I got back on the left side of the road. (There was no traffic, so I had to keep reminding myself so I wouldn’t lose focus and drift over to the right side instinctively.)

About an hour later, and seemingly out of nowhere, there were two police cars following close behind me, flashing their lights and forcing me off the road and into a parking lot.

The first one asked if I was okay.  “Yeah? Why?”  (I really had no idea why I had been pulled over.) He told me that I had been driving consistently 10 kph over the speed limit for quite some time.

I remarked that I hadn’t seen a single speed limit sign anywhere (it’s true), and he ignored my observation and asked for my driver’s license. Officer 2 stood next to Officer 1, looking very stern, holding a pen and clipboard.

They looked perplexed as they peered at my license, as if they were looking at something written in Chinese. Then Officer 1 reeled off the various speed limits for various roads – which apparently change at random.  Finally he said, with regret, that he couldn’t give me a ticket because I wasn’t a registered driver in the United Kingdom.

As they walked away, I called after them, “I promise to…”  They weren’t listening.  And, really, there was no use promising anything.  I was never going to remember what speed limit was for what road.

I finally made it to Kirkcudbright, but was too early to check into my bed and breakfast, so I decided to check out the village where I would be spending the next two days.  The rows of pastel-colored houses were lovely.

Established as a Royal Burgh in 1455, Kirkcudbright has always had a busy fishing trade, but it’s real claim to fame is being known as “The Artists’ Town.”  It is said that it was the quality of the light that brought artists to the town at the end of the 19th century.  There was a community of painters and craftspeople that lived here well into the 20th century.

The home of artist, Jesse Marion King, and her husband, Ernest A. Taylor has been preserved, complete with their charming mosaic sign over the door.

(When I snapped the photo, I didn’t notice that the shadow of King’s initials is next to the door!)

King was a well-known Art Nouveau illustrator, jewelry maker, fabric designer, and ceramicist of the time.

I went into the museum to see some of the 19th century artists’ work, and a film about them.  Then I wandered around the town, looking for the much-anticipated galleries and studios of craftspeople in the “Artists’ Town.”

It was a delightful town, but there was NOTHING there.  Not a gallery, a studio, a shop, or even a restaurant, in sight.

I had just driven almost three hours to get here (not including the hour it took to get the GPS), and I had planned to spend two days.

I’d already seen everything in less than an hour.

Furthermore, I hadn’t even checked into the non-refundable bed and breakfast I’d booked for two nights.

WHAT was I doing here?

YOU’LL FIND OUT IN PART TWO!

Tags: Kirkcudbright, Scotland
admin
https://justonesuitcase.com
There are 6 comments for this article