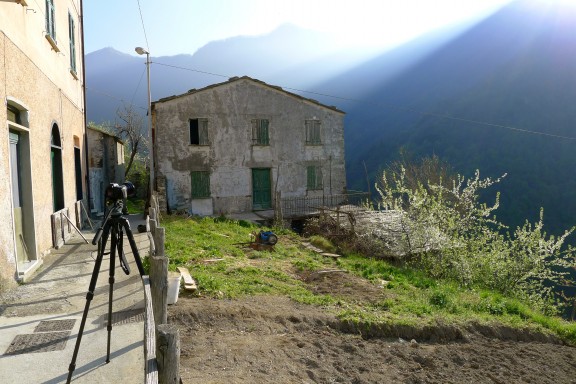 If you haven’t seen the television show, here is my personal chronicle of Brian Boitano’s transformation of a 19th century stone house in the village of Favale di Malvaro, Italy.

He started by knocking down some walls.

The ground floor consisted of four small rooms, and Brian wanted to open it up to bring in light, take advantage of the mountain view, and create a space where family and friends could gather and socialize.

This was not only a huge renovation, it had to be done in four months.  The only man for the job was Enzo Pezzolo.  Even with the hard work, there was a lot of fun and laughter.

Shooting the whole thing for a television show added another layer of activity . . . I can’t tell you how many times I turned a corner and walked right into the lens of a camera. (Not complaining – best job ever!)

While Enzo and his crew were replacing stairs and floors and a roof, we went shopping.  The flea market in Chiavari, the town where we were staying during the construction, was a gold mine for furnishing the house.

Also in Chiavari, by some strange stroke of kismet, there was a skating rink.

The local skating club was thrilled to get some tips from an Olympic gold medalist.

Back at the ranch…

The kitchen of the old house became the living room in the renovation.

Enzo built this fireplace in a day, using an old roof beam as a mantle shelf.

Brian brought chairs from home (dismantled and packed into a suitcase), found a sectional sofa at Ikea in Genoa, and accessorized with relics found on the property and flea market finds in Italy.

Adjacent to the living room, was the dining room.  Another wall was removed to open the space to the kitchen.

A wine jug from the basement was turned into a pendant light for the dining room—with the help of Enzo and Donatello.

Brian and his nieces, Krista and Aubrey, looked on as the bottom of the wine jug was cut off.

Brian’s cousin, Luciano Boitano, owns an auto body shop which came in handy a few times – but not for car repair.  Brian called on him when he wanted to paint the unfinished dining room chairs.

The finished dining room: A table from Cambi Auction House in Genoa, hand-painted Italian ceramic plates and linen napkins from the flea market, glasses from Ikea, and, of course, the chairs painted a perfect shade of green, at the Boitano officina e carrozzeria.

In the kitchen, the plaster was removed (noisily) and then replaced.

Notice that the baseboards all over the house are painted, replicating what was there originally.

Burgundy lacquered kitchen cabinets from Italian company, Snaidero, and a stove from Bertazzoni were installed.

The contemporary cabinets looked amazing juxtaposed with the old house.

The alcove next to the kitchen became a cozy banquette area where guests can hang out while Brian is cooking.

The table, in the Boitano family for generations, is from 83 year old Giovanni Boitano, who lived down the lane.

Cousin Luciano gave Brian his grandmother’s cheese cabinet – nieces, Krista and Aubrey, cleaned it up and converted it to a bar cabinet.

While we’re on the subject of kitchens, let’s just talk about food for a moment.  This region of Italy is particularly renowned for pesto and fish – and we ate a lot of both.

We had this pasta with pesto at a local ristorante one day – served family style, wide strips of hand-made pasta were tossed with the freshest pesto you’ve ever tasted.

Branzino baked in salt was another local specialty.  They would fillet it at the table, and then serve with potatoes and olives.

One of the highlights of the whole project was when we were invited to the Favale town feast.  It was held on the side of a mountain, where long tables were set up among the trees, and many course of food were served to all.

(See my post,“The Great Big Italian Feast,” for more about the day.)

Turns out Enzo is multi-talented – he was the head chef for the day.  Here he is making testaroli, which is like an Italian crepe.  They were spread with pesto at the beginning of the meal, and with Nutella for dessert.

We got to meet his lovely wife, Michaela, and their three happy children.

On location shoots, the whole crew would sit down for lunch together.  One of the best things about living in Italy is a big midday lunch.  (All the stores close until 3 or 4 so everyone can go home for lunch.)

Field trips were great, but it was always exciting to drive back up the mountain and see what was happening at the house.

The upstairs of the house didn’t need walls removed, but there were some challenges.

A charred room that had been used for roasting chestnuts became the bathroom – once Enzo worked his magic. Obviously, the room needed new walls, floor, and ceiling – but Brian wanted to keep as much of the stone exposed as possible.

When we were back in the states, Enzo sent Brian a photo of a bathtub he found, and another showing how it would fit into the bathroom.

When we got back to Italy Brian went to see the tub.

It looked great in the finished bathroom, and a chair with a broken leg (and a lot of character) was used to hold towels.  (Brian calls it the “Charlie Brown chair.”)

This antique table was left in the basement and Brian and Enzo figured out how it could be repurposed as the vanity.  The sinks are composite cement, and were purchased nearby.  The mirrors and towel hook were flea market finds.

An old ladder, also found in the basement, was cleaned up and became a towel rack.

There was a space at the end of the hallway that was perfect for a water closet.  (Brian wanted the toilet separate from the bathroom – helpful when the house is filled with guests.)

The bedrooms were in various stages of disrepair, but the plaster walls in the master bedroom were a beautiful turquoise patina.

Enzo saved the walls, and exposed the beam above the window.  Brian furnished the room with a custom made bed, nightstands found in the basement (the aunt’s didn’t get everything), lamps from the flea market, paintings from a friend, and linens from home.

Brian found a chandelier and chest of drawers at the Cambi Auction House in Genoa, and a Chiavari chair from the Levaggi Chair Factory in Chiavari.

Across the hall is the first guest room.

The chandelier is also from the auction house, the nightstands were painted at Luciano’s body shop, and the round gold mirror on the wall was purchased by Brian’s nieces at the flea market.  Brian bought the bed and the lamps at Ikea.

The trip to Ikea in Genoa was a group activity.

One of my favorite things at Ikea was the gelato machine – pop in a coin and it dispenses gelato into a cone!

The third bedroom needed new plaster walls, but Enzo matched the original paint color, and was able to leave some of that gorgeous stone exposed.

One of the house’s old window frames was hung on the wall, with family photos propped up in it.

During construction, the workers used the niches in the walls for storage…

Once the house was finished, worker stuff was replaced with Brian stuff.

The transformation of the outside of the house was just as stunning.

Check out the shutter holders – they are shaped like little men.

Last but not least, a terrace was created in front of the house for al fresco dining.

What better way to celebrate the finished renovation than with a big Boitano family feast?

Enzo Pezzolo (with his son, Leonardo)

Chris Bierlein, director of photography (from USA), and Alessandro Orlando, aka, AlesSOUNDro because he’s the audio guy (from Italy)

The cast and crew, on the last night of shooting

Tags: Favale di Malvaro, Italy
admin
https://justonesuitcase.com
There are 38 comments for this article