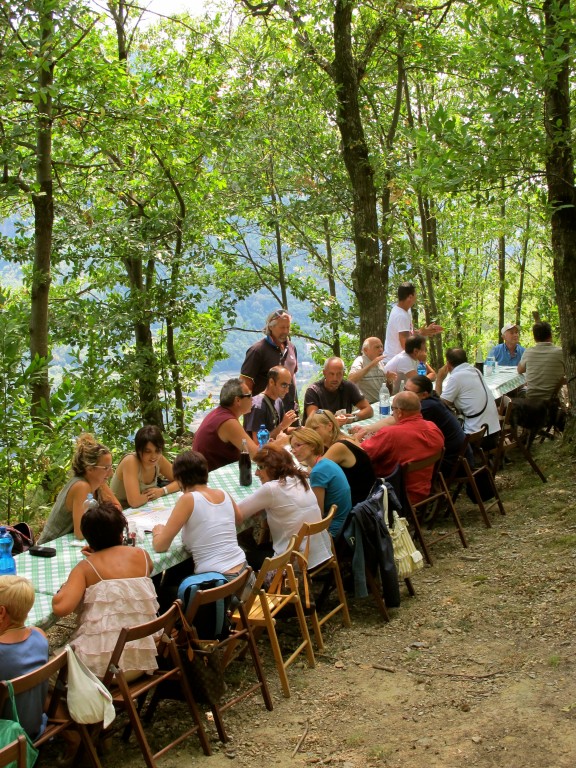 It was like a movie.  On the side of a mountain, just off a treacherously curvy road, the residents of the town of Favale di Malvaro gathered for a Sunday afternoon feast.

Brian’s contractor for the renovation of his family home in Favale was Enzo Pezzolo, and he invited us all to the town feast.

The directions were, “two hairpin turns past the carpenter’s house,” but you knew where it was by the miles of cars lining the twisting and turning road.

I pictured a block party or a backyard BBQ.  What I didn’t expect was countless long tables set up on a hillside overlooking the valley, canopies hung from the trees to shade the hot sun, the aroma of delicious food, people of all ages enjoying the day . . . and an eight course meal.

The first course was paella . . . steaming rice, chicken, green beans, and peas were served up from massive stainless steel bowls.  A group of men (including Enzo, and our electrician for the house) formed a makeshift assembly line where plates of paella were loaded onto trays so that they could be passed out to all the tables.  Baskets of bread were passed out simultaneously.

I have no idea what these locals thought of the Americans in their midst.  No one spoke English so our conversation was limited to what I could communicate in Italian.

Enzo’s beautiful wife, Michaela, and children were in attendance . . . the baby, Leonardo, enchanting everyone in his midst.

It looked like they were making pancakes, a dozen at a time, but when I inquired, I found out that they were called “testaroli.”  They are a sort of Italian crepe known to the region, made simply of flour, water, and salt.

Enzo (on the left) was everywhere there was food being made . . . who knew our contractor was a master chef?

The testaroli is spread with pesto, another Ligurian specialty, and folded in quarters to eat with your hands.

In between courses, kids made up games, men played cards, and old friends conversed.

Enzo adds salt and olive oil to the tomatoes from his garden.  There’s almost nothing better than tomato salad in Italy.

Meanwhile, a fire is being tended under massive slabs of slate.

As the tomato salad is passed out, steaks go onto the sizzling slate.

Everyone (including me) scurries back to their tables for plates of steak, tomatoes, and thinly sliced red onions.  Unmarked bottles of sparkling red wine keep appearing on every table.  It tastes great.

(I think anything would taste great here.)

I assumed that the meal was finished . . . until I saw the big trays of sausage patties, and spotted them cooking on the slate.

The spicy Italian sausage was served with more tomatoes.

Then I see the testaroli being warmed on the griddle again . . . In the foreground is Luigi, another one of the workers on the house.

Now (YUM !) Nutella is being spread onto the testaroli.  Enzo is manning the giant Nutella jar.

Even after paella, and pesto, and steak, and sausages, and tomatoes, I could have eaten a lot of these.

Dessert number two (yes, dessert number TWO) is on deck . . . a marble cake dusted with confectioners’ sugar.  Enzo’s wife and daughter are helping to plate the thick slices of cake.

Fruit salad is served and this is, finally, the last course.  Except for the espressos that were being made one at a time and passed out to each and every person.

Enzo, finished with the great feast, carries baby Leonardo on his shoulder as he mingles with the crowd.

As we drove back down the mountain, the village of Favale di Malvaro ahead in the distance, I pondered the day.

We showed up at this great big Italian feast without knowing what to expect, without belonging to the community, without bringing anything to contribute, without even really speaking the language . . . and yet, we were welcomed, without question, with smiles all around, and with all of that wonderfully marvelous food.

A day just doesn’t get better than that.

[FOR SIMPLE IDEAS ON HOW TO HOLD YOUR OWN ITALIAN FEAST, DOWNLOAD THIS PDF]

Tags: Favale di Malvaro, I T A L Y
admin
https://justonesuitcase.com
There are 4 comments for this article