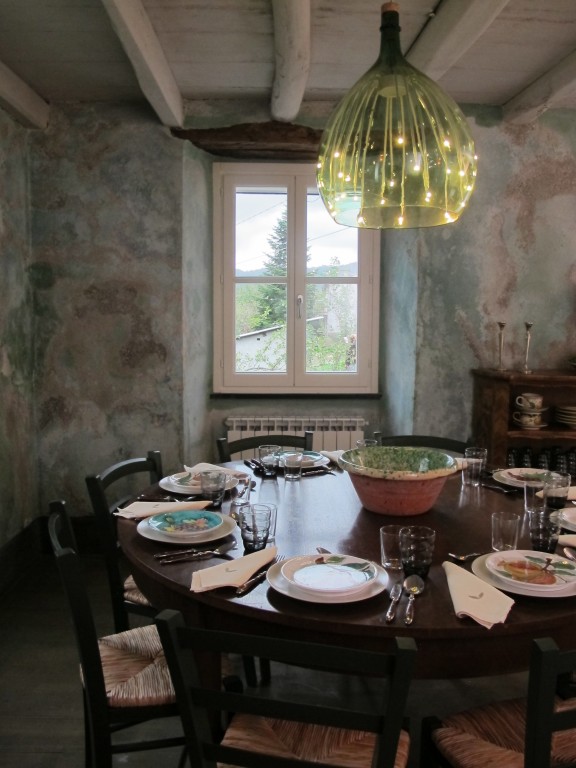 If you’ve seen the posts about The Brian Boitano Project, you’ll know that I had the best job of my life as art director of the HGTV television show, chronicling the renovation of a crumbling stone villa in the mountains of Italy.

One of the most asked questions regarding the details of the design is about the dining room pendant that was made out of a wine jug found in the cellar of the house.

So, by popular demand, here is how Brian, and his contractor, Enzo Pezzolo, made that fabulous pendant.

The house belonged to Brian Boitano’s great-great grandfather, and he knew he wanted to incorporate relics from the house into the design.

He found the old wine jugs in the cellar, covered in decades of dust.

These bottles are called “demijohns”, or damigiana in Italian.

You can often find vintage demijohns in antique stores, or on Ebay.

Remove the rattan covering, and wash the bottle, inside and out. In Italy, Brian’s cousin, Marcello, put sand and water into the bottle and shook it up to clean out the wine residue inside.  We were impressed.

The next step is to cut off the bottom of the bottle. You can try it yourself, but you’ll need an assistant. My recommendation would be to find a glass company that will cut it for you.

We enlisted Enzo and Donatello for that job. (Brian and his nieces, Krista and Aubrey, watched them work their magic.)

Holding the bottle upside down, Enzo drew a line around the base of the bottle, where they wanted to cut it.

Then Donatello used a glass cutter to score the bottle on the line.

Next, they set the bottle on its base and Enzo heated the scored line with a blow torch.

You have to be very careful not to hold the blow torch in one place for very long (the glass will shatter), so Donatello turned the bottle around slowly as Enzo held the blow torch.

Once the scored line was heated all the way around, the top literally lifted off. The edge wasn’t perfect – it had to be sanded a bit – but the imperfection just added to the charm.

Now for the lighting insert.

On a shopping trip to Ikea in Genoa, we found the perfect solution.

Brian pulled the plastic covers off of each LED bulb, leaving the tiny bulbs exposed.

The wire of the pendant was removed from the mounting unit so it could be threaded through the corks.

Once the Ikea pendant light was inserted into the bottle, and the wire threaded through the corks, it could be reattached to the mounting unit, and hard wired into the ceiling.

Enzo held it as Brian determined the desired height.

And there you have it.

Tags: Favale di Malvaro, Italy
admin
https://justonesuitcase.com
There is 1 comment for this article