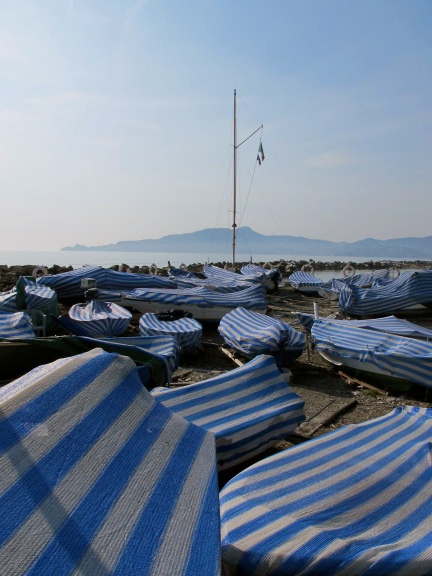 The blog can’t seem to get out of Italy, because of all the questions that have come from viewers of “The Brian Boitano Project,” since it aired on HGTV.

One of the queries was, “Where did you stay during the house renovation?”

The answer is a charming town on the Italian Riviera, called Chiavari. (Pronounced “key-àh-va-rie” with a rolling “r.”)

On one side was the sparkling blue Mediterranean Sea, and on the other, a majestic green mountain range, where Brian’s house was located.

The Palazzo di Giustizia stands majestically on one side of the town square.

A statue of Giuseppe Mazzini stands in the square.  He was a 19th century Italian politician nicknamed “the beating heart of Italy” for his efforts in the unification of the country.

Mosaic details embellish the sidewalks of the arcades on either side of the streets. I took these photos when everyone was home for lunch, but in the late afternoon the streets are closed off to cars, and the town comes alive with activity. (I took a wrong turn in my car one day and ended up driving down the pedestrian streets…you should have seen the looks of horror.)

I loved the old graphics on these signs.

This colorful window advertises the many types of salami sold inside.

Food, glorious Italian food…pesto is a local specialty.  Pasta with pesto is typically served with potatoes and green beans.

The “volcano” pizza was served at one of our favorite restaurants, Il Convivio. (Curiously, the restaurant was formerly known as “Pam Pam.”)  The pizza is filled with tomato sauce, salami, and gorgonzola cheese.

Along the Mediterranean is a wide promenade. It was April when I took this photograph, so the weather was warm enough for people to stroll, and converse, with friends outdoors. Some people even took the opportunity to sunbathe.

Sky blue and sunny yellow was a befitting, and appealing, color combination that I saw often.

Everywhere I looked was a feast for my designer’s eyes.

Even the view outside my bathroom window at The Monte Rosa Hotel was enchanting.

The bells in the St. John bell tower, just down the street from my hotel, would chime every half hour.

On Sundays, the bells would reverberate with a glorious hymn that stopped me in my tracks each time I heard it.

“For us to go to Italy is like a most fascinating act of self-discovery…back, back down the old ways of time. Strange and wonderful chords awake in us, and vibrate again after many hundreds of years of complete forgetfulness”

It feels like only yesterday that I was there.  I cannot wait to return.

Tags: Chiavari, I T A L Y
admin
https://justonesuitcase.com
There are 6 comments for this article