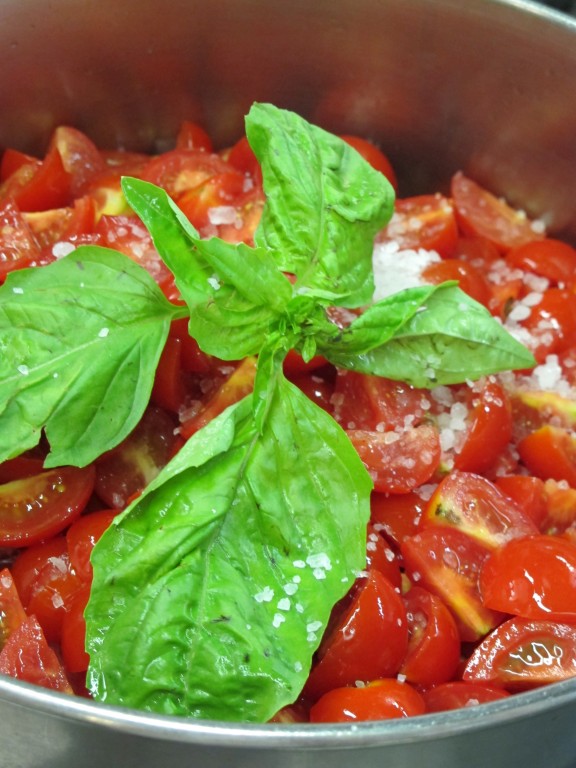 Passing by Ristorante Buca di Bacco in Positano one day, I noticed a raucous group of tourists with aprons on, and wine glasses in hand, in the kitchen. It looked like a party, but upon further inspection, I discovered that it was a cooking class.

I signed up immediately.

The next day I arrived at the restaurant promptly at 3:30 for the class. This would be my first ever cooking class, so I had no idea what to expect.

It turned out to be as much a social gathering as a class. A motley crew of six Americans were brought together by the prospect of cooking—and eating—some great Italian food.

There was a surgeon and a former pilot (with four kids at home) from Seattle, a traveling nurse from North Carolina, an occupational therapist from California, a television producer from Connecticut (that’s my significant other), and me. We became fast friends, bonding amidst the tangy, garlicky aroma of the warm kitchen.

Wine was poured and we got to work. (We made our best effort, anyway.)

Our first task was to peel and slice eggplant, for eggplant parmigiana, one of three items on our menu.

Our teacher, Chef Andrea, (who, let’s be fair, did most of the work) transferred the eggplant slices into a large container and tossed them with salt to remove the bitterness. They were then set aside so the salt could continue its task.

Next, we cut up cherry tomatoes for sauce that would be used in two of the dishes.

The tomatoes, along with some salt, olive oil, garlic, and basil, were set onto the stove to cook down into the sauce.

I couldn’t help noticing the seafood pasta being cooked alongside our sauce for patrons in the restaurant. How good does this look?

Tearing ourselves away from the delectable dishes on the stove, we were instructed to rice some boiled potatoes for our gnocchi.

This is Rafaele. He was in charge of keeping the class moving (and well-behaved) and eventually translating for the chef. (Chef Andrea stopped speaking English about two-thirds of the way through the class.)

Potatoes were set aside to cool, more wine was poured, and we watched the chef measure out ingredients for pasta: flour, eggs, chopped parsley, salt, olive oil, and milk. He deftly mixed up all the ingredients with his hands until the mixture turned into a beautiful dough.

The pasta was wrapped up for later, and before we knew what was happening, Chef Andrea was throwing basil leaves, olive oil, pine nuts, parmesan and pecorino cheese, and garlic into a food processor.

You guessed it. Pesto. (One secret ingredient used in the restaurant so the pesto doesn’t go dark: a boiled potato.)

The pesto was set aside to serve with the pasta, but we got a preview taste on some Italian bread.

Back to that eggplant. It was tossed in flour and put in the fryer.

We drank wine and watched.

Assembling the eggplant parmigiana was next. We layered the fried eggplant with our tomato sauce, shredded mozzarella, grated parmesan, and torn basil leaves.

They went into the oven, and we drank more wine.

The work surface had to be floured to roll out the pasta. Chef showed us how to lightly flour the top of the rolled up dough and fold it into thirds so it could be easily cut into strips of fettuccine.

And now, the gnocchi. Eggs and flour were mixed with the potatoes. The dough was then cut into pieces that could be rolled out.

We rolled the dough into ropes and cut it in pieces. (We were good at this.)

Then, my favorite part. Each piece is indented with your thumb while you roll it across this grooved wooden paddle. In Italian homes, children are taught to do this.

The gnocchi went into a huge pot of boiling water, to cook until it rises to the top.

Out of the oven came our eggplant parmigiana, and the gnocchi went into a skillet with the rest of the tomato sauce, mozzarella and parmesan cheese, and more basil leaves.

A constant stream of tourists stopped to look through the window and wave. (Mark my words, some of them will be in the class tomorrow.)

The pasta was cooked and Chef Andrea mixed it with pesto. At this point, we are really just watching and waiting to eat. (He seemed pretty happy to be doing it himself.)

Serving platters were set out, and the food was dished up. I was flabbergasted when I realized that those giant platters were our dinner plates!

Covered with flour, flushed from the heat of the kitchen, and proud of our accomplishments, we sat down to enjoy the fruits of our labor: eggplant parmigiana, fettuccine with pesto, and gnocchi with marinara sauce.

Chef Andrea came out to the dining room to present our diplomas.

We learned to cook, we made new friends, and we ate a fabulous dinner.

That was the best class I’ve ever had.

Wash eggplants, remove stems, and cut length-wise into slices not thicker than 1/4 inch. Sprinkle the eggplant with salt, and let stand for about one hour.

In the meantime, brown the garlic in oil over low flame, and then add quartered cherry tomatoes, salt and pepper. Cover and let simmer for about 1/2 hour, stirring frequently. Uncover and continue to simmer until sauce thickens slightly.

Wash salt off eggplant and squeeze liquid out of slices. Dredge in flour and fry in very hot oil. When browned, drain on a paper towel.

Preheat oven to 350 degrees. Coat a deep baking dish with a thin layer of the tomato sauce. Layer with eggplant slices, sprinkled parmesan, mozzarella, pieces of basil, and a small amount of tomato sauce. Repeat layering until all ingredients have been used. Cover top layer with tomato sauce, sprinkle with more parmesan cheese, and bake for about 30 minutes. Serve hot or at room temperature.

Scrub potatoes and place in a large pot of boiling water. Boil until tender all the way through but not falling apart. ( A kitchen knife passes all the way through with some resistance. It’s important that the potatoes not be overcooked, as they will absorb too much water and take up so much flour that the gnocchi will sink like heavy little stones to the bottom of the stomach.)

As soon as the potatoes are tender enough to push through a potato ricer and the are still hot, pass them into a large bowl. Don’t be tempted to try a food processor for this, it will turn them to glue. Cool potatoes.

Add the egg first, then the flour, and mix by hand until you have a pliable ball of dough. Do not over-mix.
Divide the dough into equal pieces, and roll each piece into a rope about 3/4 inch in diameter and 8 to 10 inches long. Cut each snake into regular pieces about 3/4 inch long.

Continue until all the dough has been rolled and cut. If you wish, roll each gnoccho over the large holes of a cheese grater or along the tines of a fork to impress the soft dough with a pattern, indenting one side with your thumb.

Bring a large pot of lightly salted water to a rolling boil and drop in the gnocchi. Do this in two batches if necessary, to have enough water for gnocchi to move around in the water. Boil gnocchi until they rise to the top, then remove them with a slotted skimmer and transfer them into skillet with tomato sauce, cheese, and torn basil leaves.

Garnish with a little grated parmigiano cheese if desired.

Gently wash the basil leave, paying attention not to crunch them. Lay the basil on paper towels and let them dry. Do not press or pat the leaves but leave them to dry naturally.

Cut the clove of garlic long ways through its center, remove and dispose the shoot. Then roughly chop the clove into a few pieces.

Add the pine nuts into the food processor first. The reason to process them first is that they require more time and a high speed to break up properly. We do not want to add the basil at this stage otherwise it will be over blended and the heat generated by the friction may alter the color and fragrance of the basil.

Once you have blended the pine nuts, add the basil leaves and garlic. Start blending at a low speed and then gradually add the olive oil. Add the pecorino and parmesan cheese, and salt to season. Blend again for a few seconds.

Put the pesto into a large bowl and add a spoonful of the boiling pasta water. Add drained pasta into the bowl and stir until pasta is evenly coated and serve.