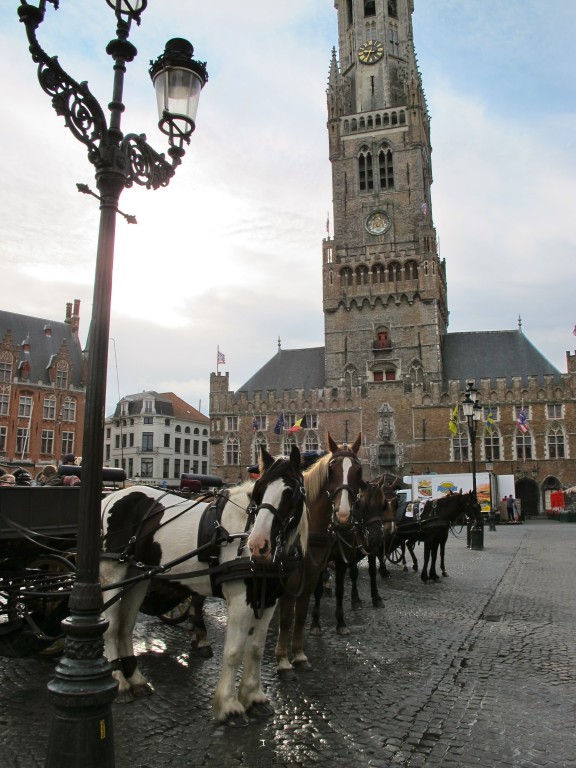 I’m in Bruges. Like the movie. Except without the shooting.

What can I say about a city that smells like chocolate, has houses that look like lace, and where the soundtrack is the clip-clop of horses pulling carriages and the (almost constant) melody of forty-seven bells reverberating from the medieval bell tower that soars above it all?

Bruges is a well-preserved medieval city suspended in time in a 21st century world. The contrast of the scores of tourists in the setting of this quaint ancient city makes it feel like one of those living history museums, except that it’s real life.

My first stop was the attic that I would be staying in for the next 3 days. Yes, that’s right, it’s an attic, and let me tell you, I didn’t know what to expect. Turns out it was lovely. I climbed up the stairs to the top floor of a building on a cobbled pedestrian street lined with shops and restaurants, to find my lofty room.

The best part is the view through the skylights – over the terra cotta rooftops to the bell towers of all the churches.

Next stop, boat tour. Yes, it’s a boat full of tourists, but it’s one of the things you have to do in Bruges.

The boat cruises past swans, in between pretty gothic houses, past medieval buildings, and under ancient bridges.

Fidel is the tourist boat mascot. He apparently hangs out in this window all day long watching the boats go by.

Once I’d seen Bruges from the water, it was time to take to the streets.

The pointy, gothic details of the architecture reminded me of the Flemish lace that has been made here for centuries.

Even the chimneys are topped with a curly-cue frill.

Wandering through Bruges was like a treasure hunt – so many enchanting and quirky details.

Colorful wooden shoes decorated the outside of this house.

The Markt square is the nerve center of Bruges, surrounded by restaurants and shops, and the provincial court.

At one end stands the imposing 13th century Belfry that marks the passing of time with its bells. If you’ve seen the movie, “In Bruges,” (and if you haven’t, you definitely should) this bell tower features prominently.

I had a debate with myself about whether or not I should climb the 366 steps to the top of the bell tower:

-Why are there only men between the ages of 20 and 30 in the queue? Is this a sign?
-That’s a really long queue – do I want to waste half the day waiting?
-After all, I get enough step-climbing going up to my attic.
-Furthermore, I could be stuck above or below someone smelly in a narrow stairwell for 366 steps.
-There’s no way out if one were to freak out halfway up. Not that it would be me, but someone might.

I didn’t go up. (It was impressive enough to look at from the ground.)

The Markt Square is also the starting point for the horses and carriages that are so popular here.

(I overheard a young man say to his friend as they passed the long line of tourists, “I’m going to finish law school and then buy a horse and carriage and move to Bruges.” Now that’s a plan.)

Here’s the “bike parking lot” in the Markt. Everyone rides bikes here, including me – I rented one each day that I was there.

The chocolate shops rule the cobbled streets. Who can resist the deliciousness of the aroma floating out of those doors?

More than one chocolatier lured tourists into their shop with these racy shapes.

Don’t ask me, I just take the pictures.

There’s hundreds of lace shops, but the one to go to is the off-the-beaten-path. It’s called ‘t Apostelientje, and is located on Balstraat. They sell new lace, and all the supplies to make it, but the treasures are in the bins of antique lace pieces.

Down the street is the Kantcentrum, the Lace museum.

The museum was fascinating, but the real gem is the little courtyard.

In the more touristy lace shops, you can buy lace trimmed everything, even costumes for wine bottles.

Is it just me or is the doll that’s modeling this christening gown kind of scary?

Speaking of scary, these mannequins at the Museum of Folklore really freaked me out.  Every time I turned the corner I thought they were real people.

The cat inside the museum gave meaning to the sign on the outside.

Bruges is a city of many historical churches.

Inside the entrance of the Basilica of the Precious Blood, is this sign:

Sure you would like to preserve the peaceful character of this building. So kindly help us by not disturbing it with noise and by keeping a worthy and reflected attitude.

It is said that a vial of the blood of Jesus is kept behind this altar, thus the significance of the name of the church.

I loved the pulpit that looked like a globe. . .

. . . and the happy marble angel with the Art Nouveau wallpaper behind it.

The interior of the 15th century Jerusalem Church was a little eerie.

In particular, this carved stone altar gave me the heebie jeebies.

The Michelangelo sculpture, Madonna and Child, in the Church of Our Lady is reportedly his only sculpture to have left Italy.  A Bruges merchant bought it and gave it to the church in 1504.

After wandering through all of the churches, I walked into this courtyard of the Begijnhof Monastery where the afternoon sun was streaming through the tall poplars.

A site so exquisite, it was akin to a religious experience.

The culinary specialty of Bruges is mussels served with frites.

With over 100 breweries in Belgium, beer is clearly the drink of choice.  I tried the Brugge Tripel, touted as the “beer of the city.”

The restaurants all advertise “snacks.” I finally figured out that a snack is a light meal, between lunch and dinner, that they serve until 6:00, when they switch over to dinner.

In other words, a snack.

Naturally, a storybook village must have windmills. Sure enough, sitting atop grassy knolls alongside a sparkling canal, are the windmills of Bruges.

Wherever I go, I try to blend in as much as possible, supposedly separating myself from the tourists.

Bruges is the exception.

It’s a place where you don’t mind being a tourist, because there’s just no way not to be one in this pretty little fairy tale land.

Tags: Belgium, Bruges
admin
https://justonesuitcase.com
There are 2 comments for this article