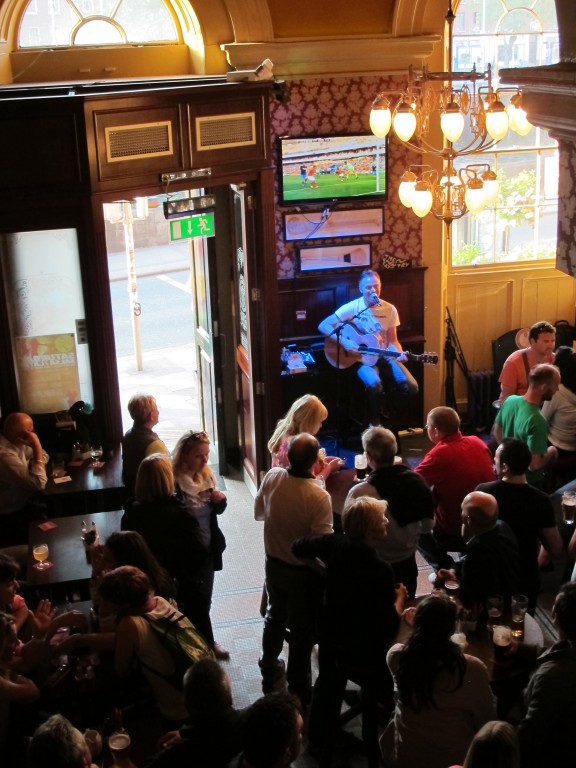 It was my first day in Dublin, and I had covered a lot of ground – but when I wandered into the Temple Bar neighborhood, and heard the music coming out of each and every pub, I really felt like I was in Ireland.

In a minute, you’ll get to hear, and see, the musicians, but first a little history:

The Temple Bar is, indeed, an actual bar but it’s also a neighborhood, named for 17th century teacher and philosopher, Sir William Temple.  He built his home on the “Temple Barr” along the River Liffey, “barr” meaning an embankment or thoroughfare.

The arrival of a customs house in 1707 brought warehouses, taverns, theatres, and brothels into the area.

When the customs officials moved their location, the district fell into disrepair, eventually becoming a rundown inner-city slum.

In the 1980’s, the bargain rents attracted artists, and unconventional eateries and boutiques, and became so popular with Dubliners that, ultimately, an effort was made to redevelop the area into the festive and dynamic quarter it is today.

I would imagine that Sir William would be dumbfounded by the tourists queueing up outside The Temple Bar – waiting just so they can say they’ve been inside.

No, I did not join the queue, but snapped this photo of the inside of the pub, with a patron in a kilt that’s right out of central casting.

Okay, enough with the bygone days – let’s get on with the music.

In The Merchant’s Arch I ordered a pint of Smithwick’s and joined the locals in their revelry.

(Sorry about the shaky video, but it was really crowded and I was getting jostled around a fair bit.)

The music, and even the instruments, varied from pub to pub.

This one had a very speedy accordionist with a guitarist sidekick – here’s a short sample.

Outside in the street, a crowd gathered for some alternative music. The drum is a wooden crate.

The music varied slightly from pub to pub, but there was one common thread – each and every patron was having a whole lot of craic!  (That’s Gaelic for FUN.)

Tags: Dublin, I R E L A N D, restaurants
admin
https://justonesuitcase.com
There is 1 comment for this article