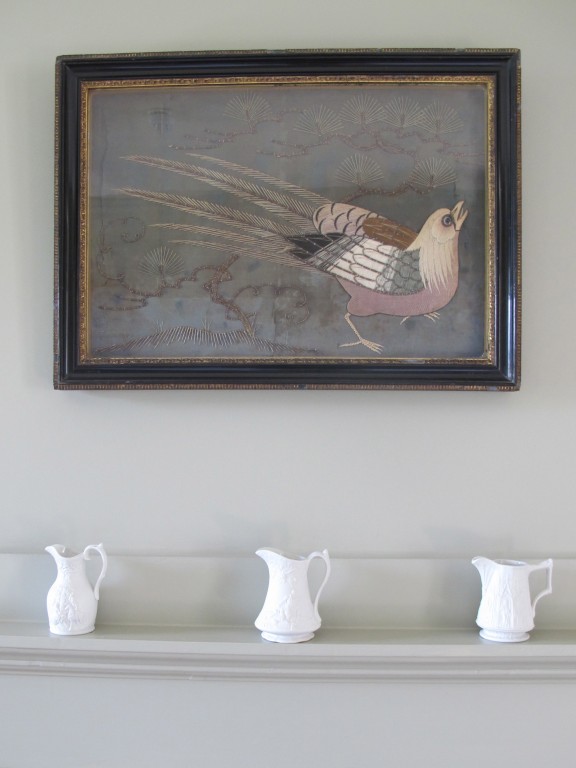 [Fond memories of Ireland, brought back by my “pub crawl” post, have inspired me to repost some of my past stories from this wonderful country. This Georgian house was uniquely frozen in time.  Check it out.]

There’s no sign and it’s not on any map or in any GPS.  After driving in circles and, finally, asking a shopkeeper, we found the little dirt lane with grass growing down the middle that led to Balinderry Park.

Here are the directions, such as they are:

“Ballinderry Park is a mile south of the village of Kilconnell, seven miles west of Ballinasloe. The village of Aughrim (site of the only battle of European significance fought on Irish soil) is about three miles to the south-east.”

We tentatively drove on, still not entirely sure we were on the right course.

A black-faced sheep lifted her head to see who could possibly be interrupting her day.

And then, there it was, through the trees.  Ballinderry Park, a Georgian country house, set alone on a plot of land that was once a forest of oak trees.  (The name “Baile an Daoire” means town, or town-land, of the oak trees.)

The house was built in the eighteenth century, described in the early records
as “the only ‘good’ house’ in the parish.”

It housed various tenants who farmed the land around it . . . 547 acres of it.

In 1947, it was sold to the Irish Land Commission, who subdivided the land among farm workers and others, while the house and a small portion of the land was bought by a local villager.

The house fell into disrepair, was damaged by vandals, and filled with farm equipment . . . until George and Susie Gossip purchased it in 2001 and took on the restoration as a labor of love.

The proud homeowner stands in the front door.

Light filters down the grand staircase from a tall window above.

A stack of ancient trunks, topped with a hat, a canvas bag, and a pair of antlers, sits at the foot of the stairs . . . as if someone has just arrived from the nineteenth century.

Antlers, aka “sporting trophies”, are mounted above doorways in the front hall.

A rustic eighteenth century chair with a curvy shape sits among walking sticks and umbrellas in a light-filled alcove.

To the right of the staircase, ammunition shells are lined up on the chair rail like soldiers.

Cobalt glassware and blue and white porcelain is arranged symmetrically in an arched niche.  Did I mention symmetrical?  These are the style moments that make me happy.

Then it gets even better.  Through the doorway is the gorgeous deep blue dining room, jam-packed with style moments.

Across from the dining room is the serene, celery-green paneled drawing room.  Seventeenth and eighteenth century Chinese porcelain is displayed in an elegant glass-front cupboard, and on walls and mantle.

The library is painted Vermillion red, with a frame of clean white millwork.  This is the room the owners spend much of their time in, so it is filled with family mementos and lined with books.

This is a portrait of George Gossip when he was a young man . . . stunning.

Bedrooms are on two upper floors, divided by a large landing of bleached pine floors and Oriental carpets.

The sunny yellow bedroom, with its paneled walls, is bathed in light.  I can imagine a couple of Georgian ladies sitting in these chairs by the window, embroidery hoops and sewing needles in hand.

Three strolling ladies in silhouette hang above the fireplace.

Even the bathroom is paneled in yellow.

The bedroom across the hall is a striking contrast, in subtle warm grey.  Each room has its own distinct personality.

I take one last look through an upstairs window, wondering who might have once looked through the lone pair of binoculars out to the pasture, and the countryside beyond.

Then I head back downstairs, feeling the smooth, time-worn railing under my hand . . .

. . . and bid farewell to the mysterious, magical Ballinderry Park.

Tags: County Galway, I R E L A N D
admin
https://justonesuitcase.com
There are 4 comments for this article