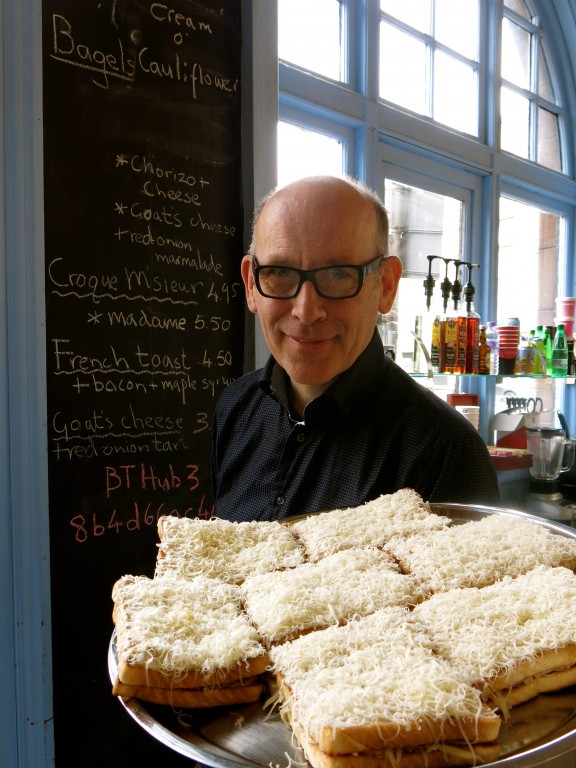 Starting in the trendy West End of Glasgow, Scotland, here are my recommendations for breakfast, lunch, tea, and dinner – and a little tour of the city as a bonus.

Sandy Welch (above) is a well-known Scottish actor, who also makes the best croque-monsieurs in Scotland, if not the world.  His shop, Felix and Oscar, named for his sons, is a great place to start the day.

There’s also great coffee, scrumptious french toast, and delectable pastries – and when you’re finished with breakfast, you can do a little shopping.  The store is chock full of hand-picked design products from around the world.  There’s Cath Kidston and Orla Kiely bags, cool kids clothes from Paul Frank, Emma Bridgewater ceramics, and Nigella Lawson cookware, to name a few.

While you’re in the West End, wander over to the University of Glasgow, the fourth oldest university in the English-speaking world.

While you’re at the university, don’t miss The Hunterian, Scotland’s oldest public museum and “home to over a million magnificent items ranging from meteorites to mummies and Mackintosh”; and the magnificent view of the city from the grounds.

There’s some great shops in the neighborhood, including this hip vintage clothing store, Starry Starry Night.

When you’re ready for lunch, head over to Avenue G.

They are especially proud of their coffee, having sought out the best beans they could find (from Monmouth Coffee Company in London), but they also have fantastic food – all made with fresh, locally-sourced, ingredients.

(By the way, also a great place for breakfast – any café that serves toast with butter and jam is on my top ten list.)

If you’re in Glasgow, you can’t miss seeing the work of Scotland’s most famous architect and designer, Charles Rennie Mackintosh.  As one of the most creative influences of the early 20th century, he was a pioneer of the Art Nouveau movement, and has left a legacy of his work throughout the city.

His masterpiece is the Glasgow School of Art. Designed and built in the late 19th century, it is still in operation as an art school.

Take a tour of the school to immerse yourself in the genius of Mackintosh, and then further your education while sipping tea at the Willow Tea Rooms.

Not far from the school, the original tea room is on Sauchiehall Street, one of the main shopping streets in the city centre.

Nineteenth century tea room mogul, Kate Cranston, enlisted the design expertise of Mackintosh for the Willow Tea Rooms in 1903.  He designed every aspect of the decor, right down to the cutlery and waitress uniforms.  The tea room has been preserved and restored and, as it has for centuries, serves a traditional afternoon tea of tiny sandwiches, scones with jam and clotted cream, and various sweet treats.

And tea, of course.

Buy yourself a Mackintosh-inspired tea towel – just one of the multitudes of related products – in the gift shop.

(Tea towels are one of my favorite souvenirs and gifts because they are easy to bring back in a suitcase . . . and who doesn’t need a tea towel?)

Dinner is in an up-and-coming neighborhood of Glasgow called Finnieston.  Once an unsavory part of town bordering the docks on the River Clyde, the area is undergoing a transformation – low rents are attracting an influx of young blood, and a slew of cool bars and restaurants have cropped up on Argyle Street.

In all honesty, I was led to this neighborhood in my search for a launderette.  I won’t tell you the story of how, carrying my bag of laundry, I made a wrong turn walking, got really lost and ended up walking many, MANY, blocks in the wrong direction; got on a bus that took me a dozen MORE blocks, also in the wrong direction; and then got off the bus and hailed a taxi when all hope was lost.

I finally got to the launderette and discovered that their water had just been shut off.

Thankfully, I discovered Crabshakk, the restaurant next door.

Let’s face it, I needed a drink.  I went into Crabshakk and sat at the bar until the water in the launderette came back on and I was able to put my laundry into the washing machine.

It’s a good thing it was well before dinnertime, because the restaurant is TINY, and rave reviews have made it one of the most sought-after restaurants in town – which means that it is always fully booked at meal times.

The beautifully designed, white subway-tiled, interior, has a few tables on the main floor, alongside a bar, and only a handful more on a balcony upstairs.

As long as I was spending some time there (I went back and forth as I moved my laundry along), I decided to order something to eat.

I would love to be able to show you a photo of the deliciousness, but I was distracted by the whole laundry situation, and just ate them.

I sat there long after my laundry was finished, enjoying the lively vibe, and chatting with the friendly bartender.

Even if you don’t have laundry to do, Crabshakk is well worth the visit to Finnieston.

And that, my friends, is the end of my Glasgow gastro tour.

P.S. I loved the to-the-point sign on the door in the Glasgow University student union, advertising a cheap cup of tea – so just had to include it in this post!

Tags: Glasgow, restaurants, Scotland
admin
https://justonesuitcase.com
There is 1 comment for this article