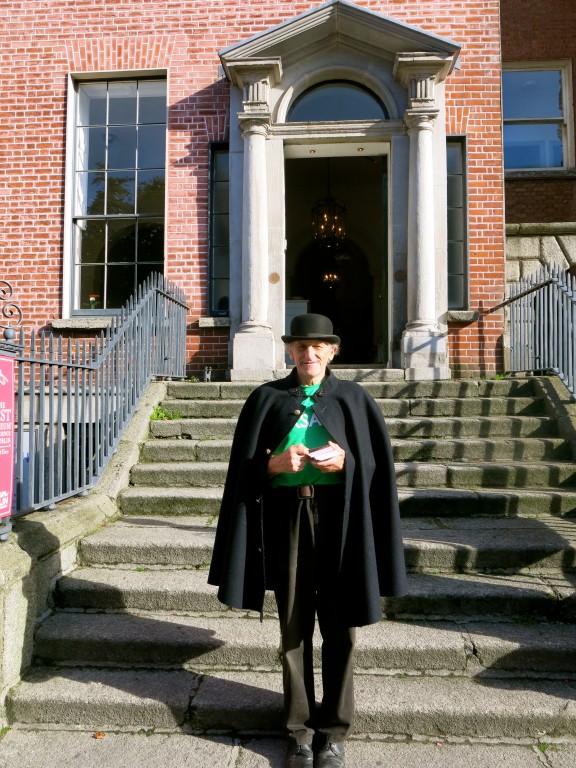 There’s a Georgian townhouse on St. Stephen’s Green in which the history of twentieth century Dublin fills the rooms. It is called The Little Museum of Dublin.

It’s like being in the home of an elderly aunt that can’t get rid of anything – except that, in this case, each and every one of the objects has historical value.

The house was built in 1776, and was a private residence until 1917, when it became the property of the municipal government.  It fell into disrepair, until funds were allocated in the last decade to renovate it for commercial purposes.

The recession hit, and the house remained vacant – until Simon O’Connor and Trevor White asked the Dublin City Council for a room or two to create a quirky boutique museum of 20th century Dublin history.

They put out a public appeal for artifacts to exhibit in their museum – and received so many donations that they had to go back to the City Council and ask if they could have the entire house.

They have now launched a campaign to restore the original stable mews of the house, which has been enclosed behind modern apartment buildings, to add more exhibition space, and an education center.

The items that have been donated run the gamut – from valuable, historical documents, to photographs, to art, and objects.

Center stage in the main exhibition room is a music stand that had been used as a lectern for John F. Kennedy, during his 1963 address to the Irish government.

The music stand had been provided by John Brennock of the Army School of Music, and had remained in his possession since that day – until his son, Mark Brennock, donated it to the museum.

Note the date on the engraved plate – June, 1963, just a few months before JFK was assassinated in November.

This is the first English addition of Ulysees, written by James Joyce and published in 1922.

It’s opened to the last page, so visitors can read it and say they’ve “finished” the substantial novel.

Peter Pearson, a local artist and conservationist, discovered this centuries-old stained glass window on the street, having been put out with the trash.  He felt that The Little Museum would be the perfect home for it.

In 1976, a young boy discovered that he was living in the home of a famous writer who had since moved to Paris, and decided to send him a letter.

“Dear Samuel Beckett, I live in your house. Can you tell me a little about yourself?”

A photo of the house hangs on the wall next to Samuel Beckett’s reply – below a portrait of the illustrious playwright.

Mr. Beckett sent back a postcard with information about the neighborhood schools he attended, and which bedroom was his.

“I slept in the tiny room, originally my father’s dressing room, beside the big bedroom with the bay windows.  (Where incidentally I was born.)

If you ever meet my ghost in house or grounds, give it my regards.  Wishing you happy years in that old home.

I am yours, antiquatedly, Sam Beckett”

The most significant item in terms of major historical narrative is a document from 1921, signed by Éamon de Valera, Ireland’s president, granting powers of negotiation to revolutionary leader, Michael Collins.  Collins went on to negotiate the Anglo-Irish Treaty which split the country in two, leading to a civil war and resonating in the Irish political system to this day.

It was found in the back of a file cabinet in a Dublin law office.

There’s a wealth of history here – and new treasures show up every day, courtesy of the fine citizens of Dublin.

The best way to see the museum is on the hourly guided tour, when a friendly and knowledgable tour guide can point out and explain the items on display.

After you’ve seen the collection, head downstairs to Hatch & Sons for breakfast, lunch, or a piece of cake and a cuppa.

Tags: Dublin, Ireland, museums
admin
https://justonesuitcase.com
There are 2 comments for this article