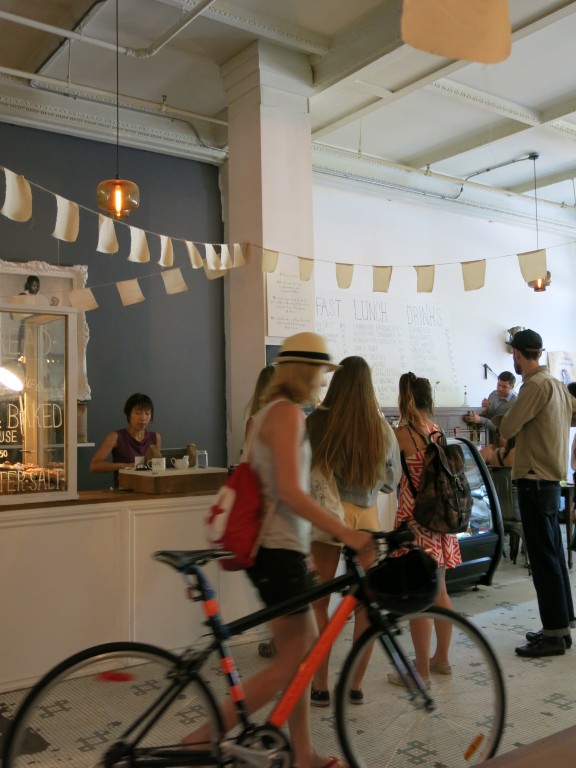 Bread and coffee are the mainstays of the menu at Nelson the Seagull, but that’s not all – and it’s not just any old bread and coffee…

The bread is freshly baked all day long, and the expertly brewed espresso coffee is perfection.

With ingenuity and elbow grease, they restored a lofty Gastown space into the kind of warm and welcoming refuge you want to hang out in all day long.

The three siblings cleaned up the old mosaic floor, whitewashed the ceiling, built tables out of reclaimed wood, and scoured local second-hand stores for chairs and accessories.

“We wanted to make a space where every meal feels like a lazy summer day spent with friends, leisurely snacking on simple but delicious food.”

The menu is a straightforward, mouthwatering offering of organic soups and salads, and sandwiches made with that fabulous bread.

The bread dough rises in large, covered wooden bins, and the irresistible aroma of loaves baking permeates the air from the open kitchen at the back of the eatery.

I had the ploughman’s sandwich, a version of the traditional British pub fare, with Dutch farmhouse cheese, house-made chutney, and red onions on thickly sliced bread.

Fresh lemonade and spring water are self-serve, and there’s large jars of home-baked cookies for dessert.

Also on offer are jars of homemade jam and meat rub.  (Check out the last two ingredients of the meat rub.)

Testament to the popularity of Nelson the Seagull, there is a steady stream of customers – on foot as well as on bicycle. (There’s a space at the back to park bikes.)

The unusual name pays homage to their South African roots, saluting beloved former president, Nelson Mandela. “Nelson the Seagull” is a nod to the hit song “The Seagull’s Name was Nelson” composed by Tony Bennett and made famous by folk duo, Des and Dawn Lindberg in South Africa in the 1970’s. The song became an anti-apartheid anthem during the time that Mandela was imprisoned.

In an effort to pay it forward to the neighborhood, and in the spirit of Mandela, they’ve adopted a “suspended coffee” tradition, where a customer can buy a cup of coffee in advance for someone who can’t afford it.

This review in YELP from Gabriele B., of North Vancouver, says it all:

“I lost it.
I tasted this bread and my head exploded.
I was going to say they made a pact with the devil for the bread to taste this good; but I actually think they went to the other side because it tastes like heaven. I’m ready to die if this is what they serve in paradise.
Holy sh*t!”

As for me, I’ve always said that if there was only one food I could eat for the rest of my life, it would be bread.

Now I’ve narrowed it down – if at all possible, I would want it to be bread from Nelson the Seagull.

Tags: Canada, restaurant, restaurants, Vancouver
admin
https://justonesuitcase.com
There is 1 comment for this article